The Mystery behind the Starchild skull: The remains of an...

DNA testing allegedly proved beyond all reasonable doubt that parts of the skull’s DNA were not HUMAN. Several specialists in Chemistry, Neuroscience and Craniophysiology determined that there is a 90 percent probability that the strange skull is the result of a hybrid being between a human mother and father of an unknown race.

The so-called Starchild Cranium is a 900-year-old cranium found in Mexico in the 1930’s. Ever since ti has caused considerable controversy in the scientific community.

Some 65 years ago, inside a cave in a rural village near Copper Canyon, south of the Mexican State of Chihuahua, a teenager found two skeletons buried in the tunnel of a mine. After the discovery, the teenage girl took the skeletons to her house, leaving them in front during the night. During the same night, torrential rains washed away the skeletal remains, and two skulls were left behind.

The two cranium were kept for years in the possession fo the girl who made the discovery. 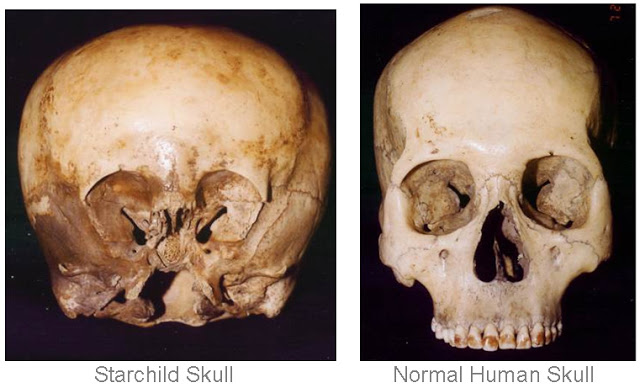 After her death, the cranium was turned over to  Ray and Melanie Young. Melanie, a neonatal nurse, said that the characteristics present on the so-called Star Child cranium were not the result of human malformation, so they decided to give the cranium to a professional for evaluation.

The skull was handed to American anthropology and paranormal researchers Lloyd Pye and Mark Bean, who in collaboration with Genetic laboratories such as Trace Genetics CA USA, the Royal Holloway Institute of London, and the support of geneticists such as Dr. Kem Paid together with several specialists in Chemistry, Neuroscience and Craniophysiology determined that there is a 90 percent probability that the strange skull is the result of a hybrid being between a human mother and father of an unknown race.

In 2010, genetics began DNA testing on what is believed to be the most mysterious ‘cranium’ ever discovered on Earth. While trying to uncover the nuclear DNA, and matching it to the National Institue of Health Database, they found a SIGNIFICANT number of coherent base pairs that have never before been seen.

This discovery was considered as a historical moment for science since it allegedly proved beyond all reasonable doubt, that parts of the skull’s DNA were not HUMAN.

The Starchild’s skull is clearly deformed. Its morphology is very strange, with bulging to each side of the eyes and with the back extended and crushed. In addition, the eye sockets are very shallow, so it is assumed that the creature lacked mobility in the eyes. On the other hand, the so-called foramen magnum, the hole at the base of the skull and attached to the spine, is advanced, almost in the center of the skull base.

In fact, experts ar said to have found around 25 anomalies compared to a normal human skull. The Starchild’s frontal sinuses are missing, as well as smaller chewing muscles, and the skull does not have an inion –the projecting part of the occipital bone at the base of the skull.

“My theory, said Pye cautiously on one occasion –since he was aware that he had no irrefutable scientific evidence to support his words— is that 900 years ago an alien being came to earth and introduced into a human female extraterrestrial sperm, but they could not copulate, because they do not have the same genital organs, so it is possible that the ‘Starchild’ was conceived through genetic engineering.”

What the skull is remains up for debate according to many. Many people remain unconvinced suggesting that the skulls anomalous characteristics are the result of Congenital hydrocephalus, and not Alien DNA as some researchers shave come to suggest.

As for the hybrid origin of the enigmatic skull, the natives who inhabit the area where the skulls were found tell an old legend about the so-called ‘Star Children.’

According to these accounts, which go back at least two centuries, beings from the stars came to Earth and impregnated women who lived in the most isolated villages in the region. After giving birth to these children of the stars they were raised for several

After giving birth to these children,  they were raised for several years, until their parents returned from the sky to take them.

Here is a video that will offer further insight into the so-called ‘Alien’ skull.

Furthermore, don’t forget to check out: Is It Just A Deformed Human? Trying To Debunk The Starchild Skull