A 13-year-old invents Tesla-like Free Energy device that costs under...

The Spirit of Nikola Tesla lives on! A 13-year-old genius has created a Tesla-like free Energy device that costs under $15. It seems that free energy might be available to everyone after all. 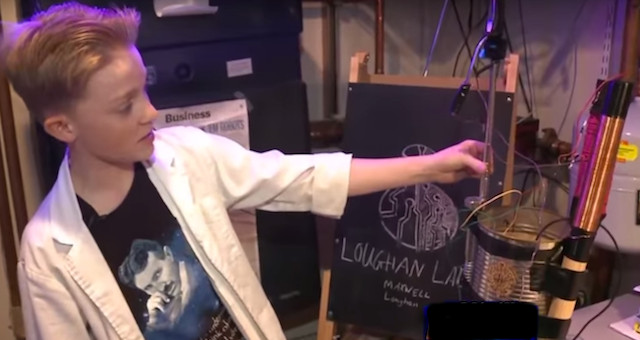 Albert Einstein, Nikola Tesla, and Leonardo da Vinci among others, have become the inspiration for many bright young minds. It seems that one of them, Nikola Tesla, inspired 13-year-old Max Loughan, to become a young inventor who wants to change the world. In fact, Max states that he has known his entire life that his purpose was to invent new things in order to make a place a better world.

Moreover, the truth is that he is on the right path as he may have created a free energy device that could change the way we use energy.

“As cheesy as this sounds, from day one, on this planet that I knew I was put here for a reason,” said Max. “And that reason is to invent, to bring the future.” (Source)

The device which is on the right track to make life a bit easier for many people was invented in his parent’s boiler room turned laboratory.

Looking at the revolutionary device, you cannot help and notice the similarities to Nikola Tesla’s famous Tesla coil. In fact, the device created by the young genius operates on some of the same principles described by the ‘father of electricity’ over a hundred year ago. What makes the newly created device even cooler is the fact that it is extremely simple: Harvesting electromagnetic energy from Earth’s atmosphere, and eventually converting it to direct current which can be used to power electrical devices.

Moreover, if all of the above wasn’t really mind-boggling, the device built by Max is made of materials that cost less than $15, and all of a sudden, free energy does not seem to be that far away, does it?

“He created an electromagnetic harvester out of a coffee can, some wire, two coils, and a spoon.” (Source)

In an interview with KTVN Channel 2, in Ren and Tahoe Nevada, the young inventor demonstrated and explained how his free energy device works.

While showing off his invention, Max uses current produced by his machine to power a set of LED lights that he placed around his brother.

The harvester is able to conduct radio waves, thermal, and static energy, and turns it into useable electricity.

“This wire takes energy from the air.”

And the inside the coffee can,

What this young boy achieved is impressive, to say the least, but the fact that Nikola Tesla has managed to inspire young inventors decades after he created some of the most important inventions in human history is something extremely exciting! We only have to wonder why it took so long for bright young minds like Max to become inspired by some of the greatest inventors that ever lived on Earth. Should we blame history books? Hmmm…

But what’s important in this story? Well, young people are working towards creating a better and brighter future, and as 13-year-old Max has shown in his demonstration, free energy isn’t a hoax, it’s real, and it can become available to everyone. Maybe one day shortly, projects like this will be taken to a larger scale, effectively changing our planet, society, and future by using free, clean energy.

“My true goal is to help. It is to invent a future where people can be happy, where they can be safe and sound.” – Max Loughan