A new Analysis of the Antikythera Mechanism reveals incredible historical...

A new study on the famous Antikythera mechanism has revealed fascinating new information about the puzzling artifact, including information about mathematics used for predicting astronomical events such as eclipses which seem to be based on Babylon arithmetics instead of Greek trigonometry.

The new detailed analysis has also allowed scientists to determine that astronomical calculations of the device began in 205 BC which made it possible to precisely date the mechanism, and if the time-table is correct, it would mean that it is very unlikely that its creator was Greek inventor Archimedes as it s believed.

The Antikythera mechanism was discovered in the 1900’s during a recovery from a shipwreck off the Greek island of Antikythera. The metal device consists of 37 different types of gears and is so complex that many consider it the first analog computer made by man. Found housed in a 340 mm × 180 mm × 90 mm wooden box, the device is a complex clockwork mechanism composed of at least 30 meshing bronze gears. Its remains were found as 82 separate fragments, of which only seven contain any gears or significant inscriptions. The largest gear (clearly visible in Fragment A at right) is approximately 140 mm in diameter and originally had 223 teeth.

After the knowledge of this technology was lost at some point in Antiquity, technological artifacts approaching its complexity and workmanship did not appear again in Europe until the development of mechanical astronomical clocks in the fourteenth century

After decades of research, scientists were able to determine that the device actually shows the positions of the sun, moon and planets as they move through the zodiac. It predicts the solar and lunar eclipses and other key events still marked like the Pan-Hellenic games. 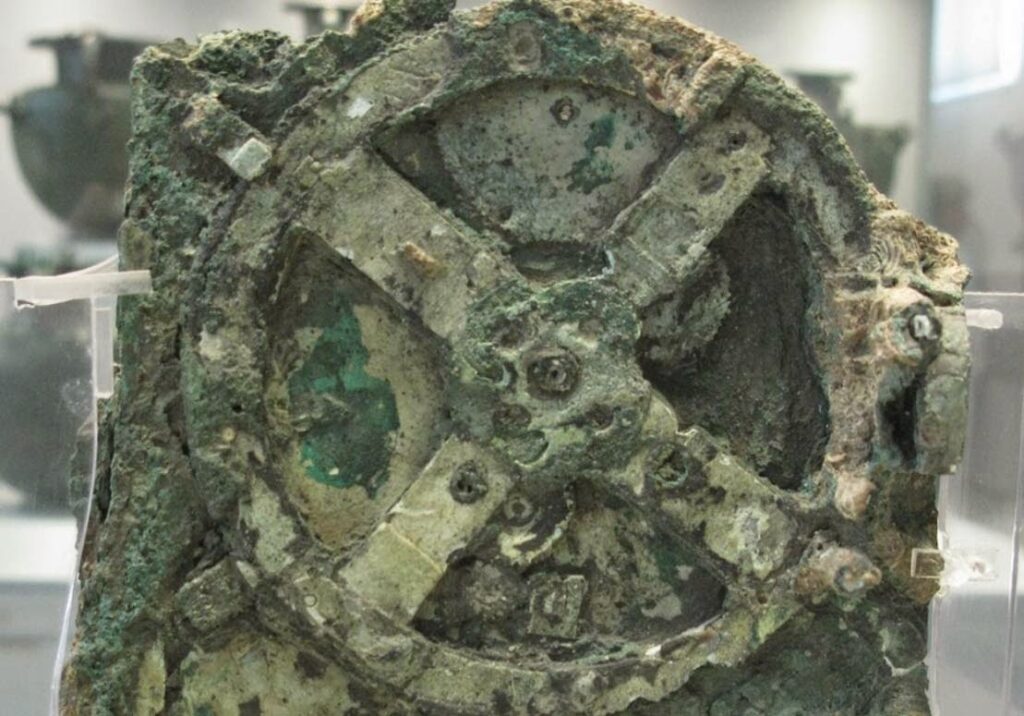 Researchers and historians have long debated when the device was built and by whom. Given its complexity, some experts believe that the Antikythera mechanism must have been influenced at least by one of the legendary Greek scientists – such as Archimedes, Hipparchus, or Posidonius.

There are some references to this ancient “computer” in the work of ancient writers. Roman politician and philosopher, Cicero (106-43 BC) refers to an instrument that reproduces the movements of the sun and five planets. Cicero describes the device, which many believe was the Antikythera mechanism and built by Archimedes. However, recent analysis questions this assumption, revealing that the device might just be greater than previously thought.

The new study revealed that the device predicted a solar eclipse that occurred on May 12, 205 BC, suggesting that the device originated in 205 BC or is even older. Researchers had previously dated the mechanism to around 100-150 BC based on radiocarbon dating and analysis of Greek letters inscribed on the device. However, the new date pushes the creation of the Antikythera mechanism approximately 50 to 100 years suggesting that it is very unlikely that Archimedes created this ancient “computer.”