The African Continent Is Splitting Into Two

According to experts, the African continent may have just started spitting apart.

A massive crack in Kenya, which caused the Nairobi-Narok highway to collapse, is a dire warning of a worrying fact. Geologists claim that it is a manifestation of a phenomenon that is occurring slowly: Africa is splitting in two.

As noted by researchers, the massive crack which is still growing, caused parts of the Nairobi-Narok highway to collapse and was accompanied by seismic activity.

This process began to become evident in the year 2005 when, after the eruption of the Dabbahu volcano, in Ethiopia, a colossal crack of sixty meters in length was opened in the area of the horn of Africa.

And scientists even know who is responsible behind all of this: The Great Rift Valley, a large geological fracture whose total extension is 4830 kilometers in a north-south direction.

It began to form in southeastern Africa about 30 million years ago and continues to grow today, both in width and in length, the expansion that will eventually become an ocean basin.

A crack that opened up in Kenya’s Rift Valley, damaging a section of the Narok-Nairobi highway, is still growing… pic.twitter.com/T5YocDauYj

In an article for the Conversation, Lucia Perez Diaz, Postdoctoral Researcher at the Fault Dynamics Research Group, London‘s Royal Holloway, explains how this could happen.

Our planet’s lithosphere, formed by the Earth’s crust and upper parts of the mantle, is in fact composed of a number of tectonic plates. The tectonic plates aren’t static, and move relative to each other at different speeds, causing them to ‘glide’ over a viscous asthenosphere.

A number of different forces move the plates around but also causes them to break apart, forming a ‘rift’ and leading to the creation of new plate boundaries.

The constant tremors of earth and emersions of lava contribute to this growth and, to continue at this rate, the bottom of the valley will be flooded by the marine waters within 10 million years.

With this, Africa will have broken into two different continents that will proceed to separate further to form a new ocean.

The  continent will become smaller and on the other hand, there will be a large island in the Indian Ocean made up of parts of Tanzania, Kenya, Ethiopia, and Somalia, including the Horn of Africa, and could look something like this: 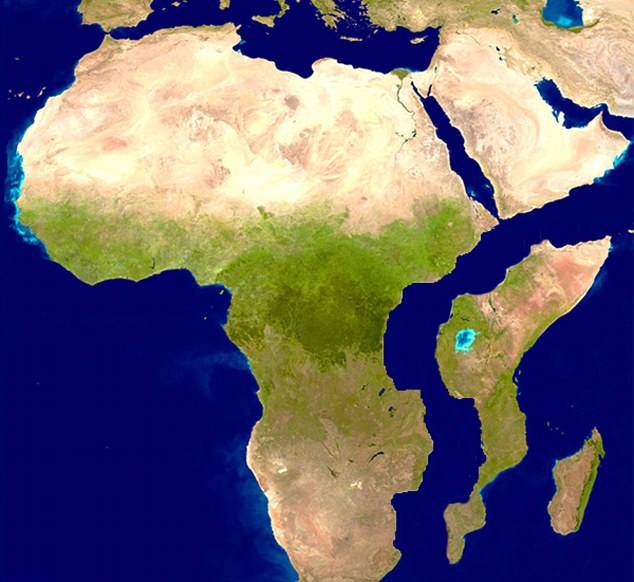