Ancient Aliens: Is the ‘Armenian Stonehenge’ linked to extraterrestrials?

Armenia is beautiful, no doubt about it. And it’s ancient. So, of course, it contains it’s own ancient monolith sites, and civilizations have risen and fallen dozens of times over the millennia. But probably the most mysterious one is Zorats Karer, also known as the Armenian Stonehenge.

Also known as Carahunge, or Karahunji, the site is said to be at very least 7,500 years old – and possibly even older. Some estimates say it’s at least 4,500 years older than the “original” British Stonehenge.

Sitting just south of Sisan, Armenia, a total of about 280 stones, some weighing up to 50 tons each, are arranged in an interesting pattern that stretches about a third of a mile long with lines of stones stretching in three directions. 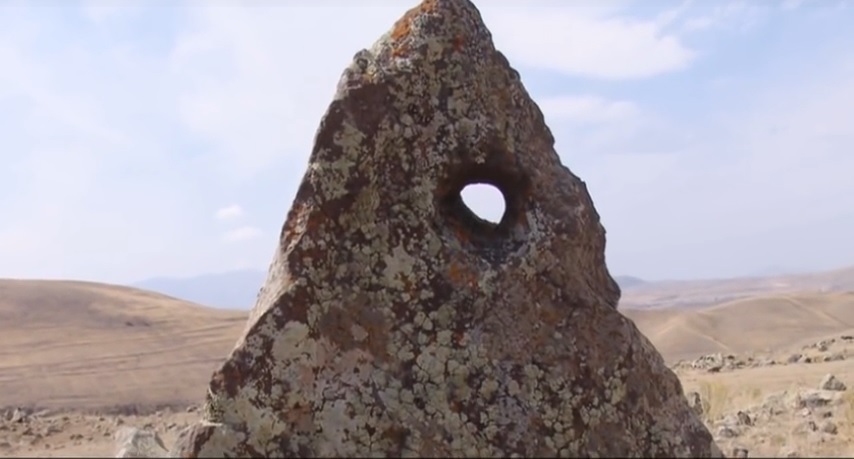 Image: Screenshot via YouTube video In the middle of the formation is a double circle, known as a henge.

Although no one knows for sure what the stones were used for, there are many theories. According to Giorgio Tsoukalos, of Ancient Aliens fame, and publisher at the Legendary Times Magazine, the site is likely of extraterrestrial origin. Interspersed with the monoliths are smaller stones with carvings on them. These depictions very much resemble what you might think of when you think of the typical alien form.

According to Jadon Martell, an author from the Knowledge Apocalypse, many people have speculated that the beings depicted do indeed seem extraterrestrial in origin. He goes on to state that when you look at the heads, you see:

“Bulbous shaped heads, slanted eyes. Very similar to what we see in a modern-day grey alien.”

Tsoukalos agrees with this assessment for many reasons. One such reason points to one of the stones that depict two of these “extraterrestrial” beings holding what looks like a round disc. Of this carving, Tsoukalos says:

“What’s interesting in this carving right here … You’ve got this sphere that’s sort of just floating there in midair. Is it possible that these here represent flying discs? The answer is yes. Because again this is a human rendering of something that they witnessed a long time ago. And it had to be compelling enough for them to carve this into stone.”

On another carving, it is easy to see the elongated, bulbous head, but in this one, it is much more pronounced. They have the same slanted eyes, but in this case, there is a focus on what would be the brain area, with what looks like an outline of where the brain would be.

Tsoukalos goes on to say that the site also seems to have some type of astronomical importance, but linked to extraterrestrials. In fact, the Armenian Stonehenge very well might be the oldest observatory in the world, evidenced by the fact that other, similar sites aren’t nearly as old, but are known to have astrological importance.

The holes bored into the Armenian stones were done so at specific angles. Some people believe they pointed at specific stars. at the time they were made.

Tsoukalos has an interesting theory about the observatory argument. He states that:

“The only reason why I would do this if I were on a foreign planet is to give a message to future generations to say ‘Hey, nudge, nudge, this is where we came from.'”

In 1984, research by Onik Khnkikyan seems to back up the observatory theory. At the same time, surrounding archaeological and astrological studies found other prehistoric astronomical sites of importance as well. These included Angeghakot and Metzamor.

The Armenian Stonehenge, also called the “Speaking Stones of Armenia,” because of the literal translation of its name, may have had other ritual uses as well. Zorats Karer researchers say that the site may have been used to cater to the cult of the Sun god, which early Armenians worshipped.

The Armenian Stonehenge includes at least one tomb and multiple burial sites that yielded Bronze Age petroglyphs and other objects. These finds gave rise to the thought that the site was used as a funerary.

Whatever the meaning of the Armenian Stonehenge, its true purpose remains an unexplained mystery, and likely will for quite some time. Nevertheless, it is an amazing and beautiful archaeological site and one that it is open to the public to visit.

See more in the documentary from the History Channel below: