Ancient people inhabited the Arctic over 45,000 years ago

Another discovery has been made that drastically alters our views on ancient mankind as researchers discovered the carcass of a woolly mammoth with what are ‘unmistakable’ signs of spear wounds. 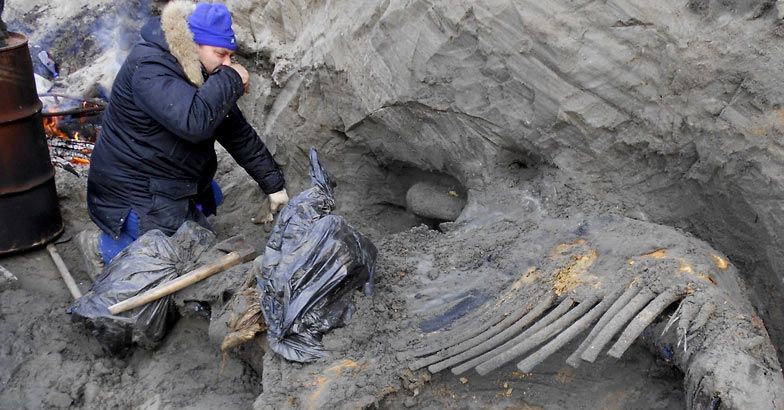 Researchers have discovered the frozen carcass of a woolly mammoth in Siberia with what are ‘unmistakable’ signs of spear wounds, a piece of evidence that suggests people inhabited the arctic regions around 45,000 years ago, a number that changes everything we thought about ancient mankind. The male mammoth which was excavated at the Yenisei Bay on the Arctic Ocean is the ultimate evidence of people inhabiting the region thousands of years sooner than previously thought possible.

According to Vladimir Pitulko, senior research scientist at the Russian Academy of Sciences’ Institute for the History of Material Culture in St. Petersburg, until this discovery, it was estimated that the oldest evidence of people in the Arctic dated back some 30,000 years.

Researchers believe that the people who inhabited the harsh region of the Arctic were most likely hunter-gatherers.

“Indeed, these animals provide an endless source of different goods: food with meat, fat and marrow; fuel with dung, fat and bones; and raw material with long bones and ivory,” Pitulko said.

“They certainly would use them as food, especially certain parts like tongue or liver as a delicacy, but hunting for the ivory was more important,” added Pitulko, with the ivory substituting for wood in the treeless steppe landscape.

According to Pitulko, the mammoth which was excavated in 2012 had injuries which unequivocally indicate it had been killed by people. Pitulko added that damage to its ribs appears to have been made by spears thrown by ancient hunters, the mammoths cheekbone injuries were most likely caused by hand-held thrusting spears. Pitulko added that researchers found that the damage to the mammoth’s right tusk was most likely caused by people chopping at it after the animal was killed.

“The main part of it is that the mammoth was really killed by humans, and evidence for that is unbeatable,” Pitulko said.

Scientists agree that mammoth-hunting was a crucial factor that helped ancient man survive under the harsh environment of the Arctic and travel across northernmost Siberia. It is believed that ancient people reached the vicinity of the Bering land bridge that at the time linked Siberia to Alaska and that the first humans to reach the ‘New World’ crossed the icy land and then eventually spread through the Americas. Pitulko also believes that given the fact that people were present in the Arctic over 45,000 years ago, it is very likely that humans crossed the Bering land bridge much earlier than previously thought, and consequently reaching the Americas much earlier.