The image illustrates what some call ordinary geological formation but with a very symmetrical and defined shape. According to many, this indicates the presence of an extremely ancient and eroded pyramid.

Hawaii is definitely one of the most beautiful places on the surface of the planet and has attracted tourists because of its unique environment, beautiful beaches, and friendly people. However, after a tourist took images of peculiar structures on one of the islands, people started talking about what appear to be huge Pyramidal structures surrounded by the ocean.

Many people around the globe believe that there are pyramids on every continent on the planet. From Egypt, Mexico, and Asia, these enigmatic ‘monuments’ were developed thousands of years ago for an unknown purpose. According to a hypothesis proposed by author William “Pila” Chiles in his book ‘The Secrets and Mysteries of Hawaii: A Call to the Soul’, the pyramids may have been built on one of the Hawaiian Islands by an ancient culture and share a connection with other pyramids on Earth, through the configuration of a ancient planetary grid.

Hawaii – a place all the world knows as paradise and one of the most remote places on earth — may hold a clue for all humanity during our very defining moment in history. Pila explains why Hawaii is the crossroads of all our mysteries. The Hawaiian people, their legends, and culture, even the location of the islands themselves hold a key that could unlock a giant door and reveal the path to our future. Pila of Hawaii will take you on a journey through time and captivate your soul with the life-transforming power that the islands’ sacred sites, folklore, and myths bring to those who are willing to seek it. Whether you are planning a trip to this tropical paradise or searching for greater insights into your spirit, this book will open you to a world of exquisite beauty and power. – ‘The Secrets and Mysteries of Hawaii: A Call to the Soul’

As Chiles writes in his book, the Pyramid –or Pyramids in this case—are located on the Island of Oahu, some five miles from Punaluu, the famous black sand beach.

An image taken by a photographer seems to depict these pyramids. The image illustrates what some call ordinary geological formation but with a very symmetrical and defined shape. According to many, this indicates the presence of an extremely ancient and eroded pyramid. The images of the alleged structures were posted on ‘Exploration Hawaii’ but later taken down for an unknown reason. 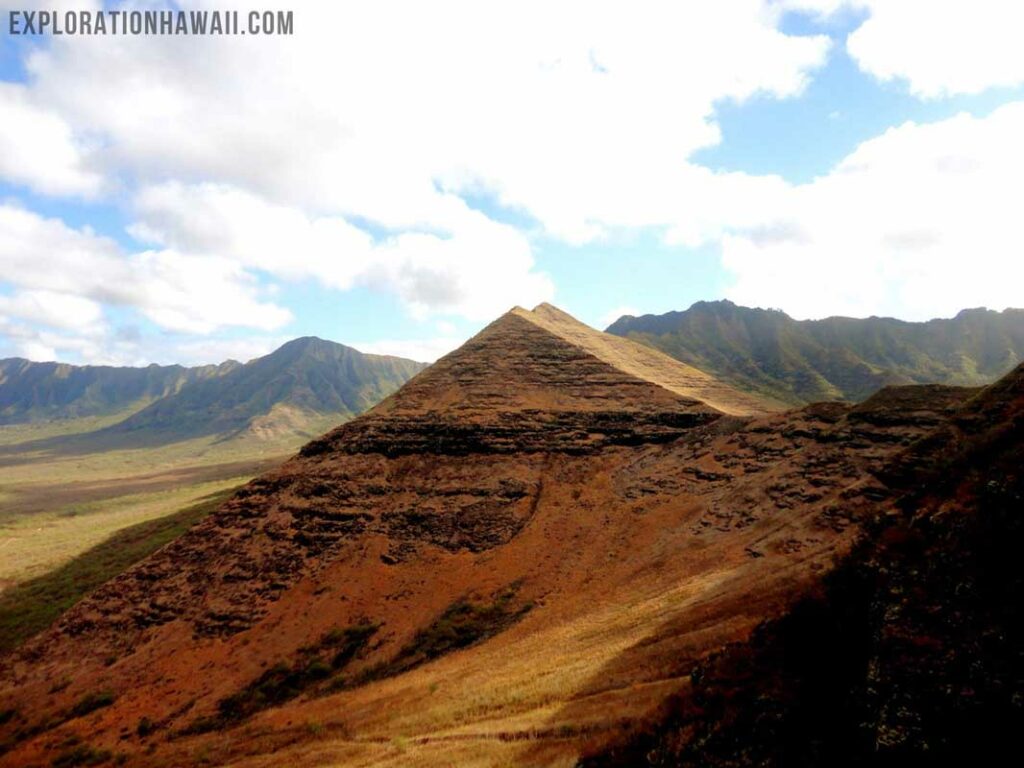 Venturing into an even complex hypothesis, Chiles suggests that  Hawaii is one of the few places on Earth that still preserve evidence of the existence of the ancient civilization of Atlantis, which is believed to have existed some 13,000 years ago when a catastrophic even wiped out the civilization, creating mass destruction around the globe.

Mainstream scholars, on the other hand, remain convinced that such history never existed and that there never was an advanced civilization before ours.

Author William “Pila” Chiles is firmly convinced that there is a lost Pyramid(S) in Hawaii and points to a study conducted by Lee Ross, an independent researcher who believes that Hawaii is located in a so-called ‘World Grid Node.’

A very important point to consider is that many believe that just as the Nazca Lines, the Pyramids of Giza, the Temple of Angkor Wat, the Pyramids of Hawaii were placed in specific locations around the globe.

Ross’ proposal is based solely on the theory of the Planetary Grid, an intelligent geometric pattern which suggests that our planet and its energy are organized in such a way that ancient cultures build megalithic sites around the globe, harnessing natural energies.

Planetary Grid theorists suggest that grid lines are a naturally energetic and organized network, a source of free and inexhaustible energy, which supplies power to ancient technology of great civilizations like  Atlantis. Interestingly, many believe that this technology can be recovered again and used in modern times.

There isn’t doubt that ancient cultures around the globe gave extreme importance to symbols and signs, means by which information and knowledge were encoded in ancient times. Geometry thus assumes a sacred dimension, thanks to which knowledge is transmitted to new generations. But for some experts, Sacred Geometry also had the function of governing invisible forces of nature.

Ancient cultures around the globe easily manipulated the invisible energy of our planet. These ancient cultures were not as primitive as many scholars suggest, in fact, the study of the remote past of humanity reveals how our ancestors were able to combine science and wisdom, intelligence and spirituality, technology and nature. Our modern civilization today is incapable of that since our lifestyle and culture is constantly in contradiction with science, wisdom, intelligence, spirituality, technology and nature.

Researchers need to take a step back and analyze with detail the development of ancient civilizations around the globe. This will allow them to understand how ancient cultures functioned in harmony with the lays of the cosmos and energies around us, and maybe then we will find the answers to the numerous problems mainstream scholars are facing when trying to decipher the past of our species.