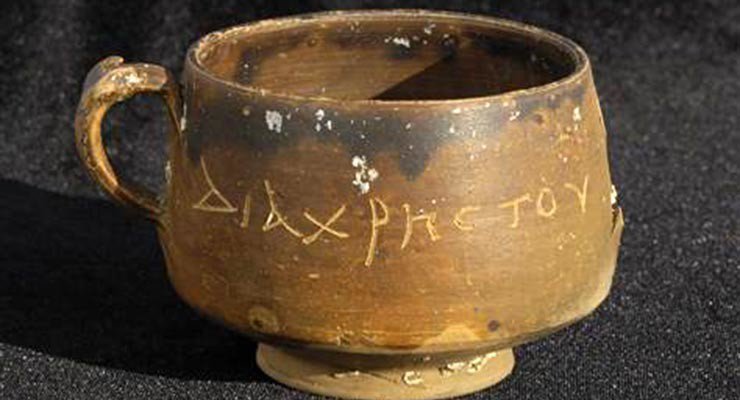 The figure of Jesus Christ is undoubtedly a cultural character of significant importance in the history of mankind. Jesus Christ is the pillar of one of the most powerful religions of the world making it difficult to question this premise. However, it is interesting to understand how much of what we know about Him responds to an institutional adaptation of the original figure and how He was in reality previous to being appropriated by the church.

The oldest reference we have of Jesus Christ is in fact this newly discovered bowl, dating between the late 2nd century B.C. and the early 1st century A.D., with the inscription “DIA CHRSTOU O GOISTAIS,” which has been interpreted as , “by Christ the magician” or, “the magician by Christ.” The antique bowl was discovered by French archaeologists, Franck Goddio.

Beyond the simple peculiarity that this phrase implies, which according to researchers actually  suggest as many have already noted, that the origins of Christianity keep a close relationship with the pagan mysticism-a facet which, incidentally, the Catholic Church has spent countless efforts to detach. How the catholic church will react to this finding and whether it is something that will challenge the fundamentalism of the church is something that many are waiting to find out.

In a interview with NBC, Goddio, who is a member of the Oxford Center for Maritime Archaeology, warned of the discovery:

It could easily be a reference to Jesus Christ, in the sense that He was once a major exponent of white magic.

Many scholars and historians, such as  Manly P. Hall, have been devoted to exposing Christ and other members of the protagonists of religions around the world, as magicians and sorcerers and with this finding, these theories could be strengthened by a document of incalculable historical value.

As the French researcher indicates, among the theories that are being considered, one could make reference to Jesus Christ who at that time, could have been the greatest exponent of white magic.

The value of the discovery increases due to its antiquity. Egyptologists who have studied this piece say the bowl, which originates from Asia Minor, dates to the first century BC and that the inscription was performed before 50 AD. This would make the finding the first known reference of the messiah, honor that until now held a letter of St. Paul the year 51 AD. This is just one of the few theories that are actually being considered by experts.