NASA’s Opportunity rover has snapped an image of the surface of Mars where a mysterious dome-like structure is clearly visible. Is this the ultimate evidence Mars was inhabited in the distant past? The strange ‘dome’ even reflects sunlight which according to many is a tell-tale sign of its metallic composition. 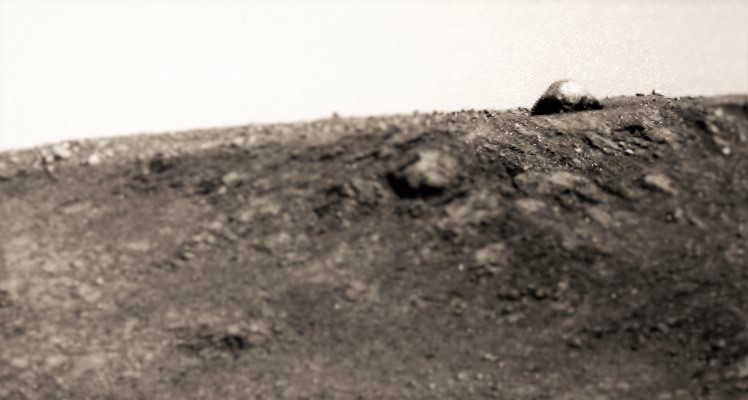 In the last couple of months so much has been said about the red planet. We have come to understand that after all, Mars isn’t such an inhospitable and dead planet.

In fact, in the last couple of years the numerous discoveries that have been made on Mars point to the fact that in the distant past, Mars was eerily similar to Earth, with a human-breathable-atmosphere, giant oceans covering its surface, rivers lakes, and most likely life.

But in addition to the numerous scientific facts which almost certainly prove alien life could have developed on Mars in the past, there are countless images of the surface of the red planet which have caused a massive uproar on Earth.

Hundreds of images from Mars’ surface show what seem to be artificially made structures decorating the now-arid landscape on the red planet.

But what are these structures? Are these the result of Pareidolia as many suggest? Or is it possible that one of them point to the fact that tin the distant past, an Alien civilization might have developed on the surface of the planet?

So far UFO researchers and Alien hunters around the globe have discovered a sheer amount of anomalous structures on the planet which suggest that in the distant past, intelligent life inhabited the planet.

Interestingly, even scientists have spoken out about Mars and certain peculiar characteristics which have been interpreted as tell-tale signs of intelligent lifeforms developing on Mars.

In November of 2004, plasma physicist Dr. John Brandenburg said that it is very likely that an Ancient Alien civilization on Mars was wiped out in a nuclear catastrophe.

According to Dr. Brandenburg, there are numerous indicators on Mars which suggest a massive ‘nuclear attack’ occurred in the distant past on the red planet.

Dr. Brandenburg seems to agree with most UFO researchers and Alien hunters on the surface of Mars. Even though he did not go into detail about the alleged Alien races that once inhabited Mars, Dr. Brandenburg points to numerous ‘artifacts’ on the surface of the red planet which he says are remnants of an intelligent society that once inhabited our neighboring planet.

According to Dr. Brandenburg, layers of radioactive substances including uranium, thorium and radioactive potassium on the surface of Mars must be considered as the ultimate evidence for his theory.

Speaking about his theory to Mail Online, Dr. Brandenburg  revealed: We have now found evidence of the nuclear melt-glass Trinitite (formed on Earth at the site of nuclear weapon air-bursts) at two locations of the hypothesized explosions, and this will be presented at the conference.

‘This strongly supports my hypothesis of massive nuclear airbursts.’

‘So far no scientist has offered any other explanation for this body of data.’

However, if such a catastrophe did occur on the surface of Mars, wouldn’t we find giant structures on Mars?

Well its very likely that we have, and are still continuing to discover such structures.

Popular Facebook Page Journey to the Surface of the MARS has found yet another priceless image of what they are calling the best “PROOF” of a Martian civilization.

An image snapped by NASA’s Opportunity rover shows what appears to be a dome-shaped structure on the surface of the red planet. The image which according to many even reflects sunlight off its surface is a clear indication that in the distant past, Mars was inhabited by Alien civilizations.

UFO researchers say that the anomalous structure spotted by the Opportunity rover is unique, and no similar formations are seen anywhere in the vicinity.

They say that its peculiar shape is one of the best signs of intelligent design.

Is it possible that structures like the one photographed by the Opportunity rover are another piece of the Puzzle indicating a Martian ‘global’ catastrophe occurred in the distant past?

According to many people around the globe, its hard to believe that life only came into existence on Earth and evidence of that are the number of structure bearing clear signs of intelligent design.

What do you think? Is it possible that this image taken by the Opportunity rover is the ultimate evidence of Ancient Alien civilizations on Mars? Or is this just another example of Pareidolia?

Check out the raw image from NASA here.

Facebook Page Journey to the Surface of the Mars