Archaeologists find one of the lost gates of the ancient...

Researchers excavating the ancient city of Odessos in Bulgaria are celebrating the rediscovery of one of the lost gates, which had not been seen since 1982.

The southwestern gate of the city had been found once before but excavation stopped and the gate was lost again.

The city sits on the coast of the Black Sea and is now known as the city of Varna in Bulgaria, which is home to the world’s oldest gold artifacts dating back to 5000 BC to 4000 BC.

Many of humanity’s earliest cities were built for defense from attacks, so Odessos featured walls that made it a fortress, especially since it serves as a strategic point on the Gulf of Varna. The Bulgarian Navy is even headquartered at the seaport today.

The city has been under the control of several of the great empires, including the Thracians, Greeks, Romans and the Ottomans.

In fact, Odessos may have been the site where the Byzantine Empire signed a treaty ceding control of its northern territory to the Bulgarian Empire in the 7th century.

As is usually the case throughout human history, this ancient city fell to ruins, making way for a more modern city to rise and the old city soon buried and largely forgotten until archaeologists dug it back up.

And now after decades of searching, lead archaeologist Associate Professor Valeri Yotov of the Varna Museum of Archaeology and his team have found one of the lost gates to the city.

According to Archaeology in Bulgaria:

The newly discovered Late Antiquity / Early Byzantine fortress gate of Odessos has been found to have been impressive in size, and might have as wide as 8 meters. So far, the archaeologists have unearthed what they believe was half of the gate’s width.

They have also dug up the beginning of the main street from the gate to the ancient city center, whose 1,500-year-old paving has been preserved in a perfect condition. Along the street, there was a ditch. The ruins of a fortress tower have also been discovered next to the gate.

“The [newly discovered ruins] are from the Byzantine fortress wall in this part of the ancient Odessos, which can be dated to the 5th – 6th century AD,” Yotov told the publication. “This is one of the gates [of Odessos] that we can call conditionally the Southwestern Gate for the time being. Or the harbor gate since it was the one connected to the port.”

The road and gate are just one of several Roman structures that are preserved in the city, including a Roman bath that is the fourth largest Roman bath in Europe.

“The western gate gives the start of the main street, which is always oriented “west-east,” Yotov said. “It is a Roman-Byzantine structure. We are still in the working phase but it is for certain that this [fortress] was first built in the Roman Era, and was then restructured, and continued to exist up until the end of the 6th – beginning of the 7th century.”

And it’s the only gate that has been uncovered thus far.

“This is the first gate [of Odessos] to have been discovered during archaeological excavations,” Yotiv continued. “That is, this is the first [known] gate of the ancient city. Up until now there have been only guesses about the existence of this gate, and by the founder of Bulgarian archaeology, Karel Skorpil. He hypothesized that one of the gates of ancient Odessos was in the area of today’s Dragoman Street which is quite far north of here.” 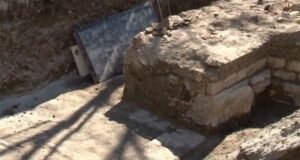 The discovery follows a major find off the coast of Israel, where archaeologists discovered undersea ruins of a fortress linked to several biblical battles detailed in the Book of the Maccabees. The fortress had an inner wall and an outer wall. Once the outer wall was penetrated by enemy troops, they would be caught in a kill-zone between the two walls, making it a formidable structure to conquer.

While the site is still being excavated, people may soon get a chance to see the gate and road of the Odessos fortress ruins for themselves in the near future.

In his report to Varna Municipality and a future committee of Bulgaria’s Ministry of Culture, the archaeologist is going to recommend that the site of the newly discovered Southwestern Gate of ancient Odessos be exhibited in situ as an open-air museum, adding more to the already accessible ancient ruins in the Black Sea city of Varna.

In his words, the newly found ruins could be connected with a small park already existing nearby.

It’s certainly an interesting way to incorporate education into the community, and residents and tourists can walk through history and imagine what it must have been like in the old city. This is an important find that only makes us yearn for the discovery of the other gates.