6 Astounding Machines Of The Ancient World

The majority of people associate mechanical engineering with the modern era, but that association is far from true. The fact is, our ancient ancestors have used complex machines since the beginning of the Bronze Age.

Employing innovative tools such as the pulley, the wheel, and the lever, these early engineers helped to erect huge monuments such as the pyramids of Giza, the Great Wall of China and the Gardens of Babylon. But there’s one culture in particular whose contributions to the world of engineering almost kick-started a technological revolution thousands of years before the Industrial Age.

The Greco-Roman people were fond of engineering and born from the mantle of their mutual knowledge they developed some of the most extraordinary inventions to grace the classical world. This included aqueducts powered by gravity and pumps that harnessed centrifugal force.

However, there are a number of inventions that were so precocious, they force us to reconsider the brilliance of their engineering abilities. Some of these artifacts have been rediscovered from ancient manuscripts, while others have been pulled from the bottom of the ocean (lost for over two thousand years). These astounding machines are literally hundreds to thousands of years ahead of their time. 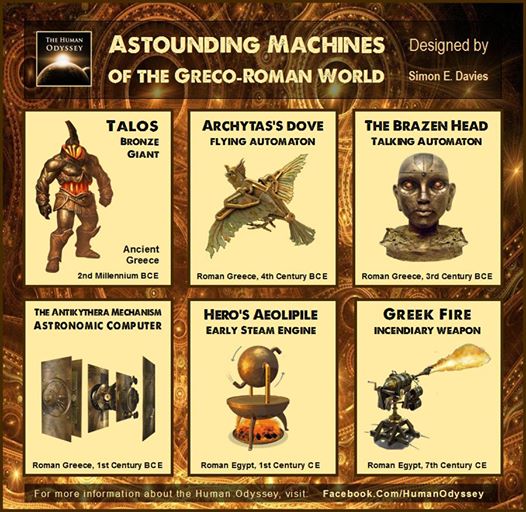 TALOS
Although we can assign ‘Talos’ to the realms of fiction, this mechanical monster does remind us that robotics is not exclusive to the contemporary era. The Greeks fascination with machinery goes back as far as ancient myth, where the God Hephaestus built many automatons such as talking mechanical handmaidens and giant robotic dogs.

ARCHYTAS’S DOVE
After the Bronze Age collapse, new engineers from Hellenistic Greece began to play with mechanical devices (perhaps inspired by Hephaestus himself). Archytas, a Greek philosopher, was said to be the father of mathematical mechanics. One of his most legendary inventions was that of a mechanical dove which was said to be propelled by steam.

THE BRAZEN HEAD
Still in the realms of legend, but not altogether a myth, comes the strange and mysterious Brazen Head. This device appeared in the 3rd century BCE connected to the Roman poet Virgil. It was claimed that this mechanical head had the power of speech and could converse with its users at will. Its creator remains unknown, but its legend appears throughout history several times, linked to mystics such as Boethius (480 – 525 ce) and Albertus Magnus (1206 -1280 ce).

THE ANTIKYTHERA MECHANISM
The Antikythera Mechanism is another remarkable machine whose inventor also remains a mystery. This astronomical device was housed in a wooden box and composed of 30 bronze gears (perhaps more). By turning a crank, all the internal gears would rotate, calculating of the positions of the Sun, the phases of the moon and possibly the locations of planets. After being lost in a shipwreck, It would take another thousand years before another, more rudimentary clockwork device was made.

HERO’S AEOLIPILE
Hero’s Aeolipile is a small rocket-like engine which spins when heated. It is considered to be the first recorded steam engine in history. Had this proto-engine been developed further, it is possible that a steam-powered chariot could have become a reality nearly 2000 years before the invention of the steam train.

GREEK FIRE
Towards the end of the Roman Empire, a new and emerging weapon came into play with devastating consequences. The Byzantines perfected an incendiary weapon that could project a plume of fire so intense, that it literally incinerated ships within minutes. This mysterious fire was said to be almost inextinguishable (even when doused in water). It gave the Byzantines a technological advantage and was responsible for many key military victories. Its formula was a closely guarded state secret and is still unknown to this day.