Does this ‘Top-Secret’ memo finally prove a UFO DID crash...

According to Ufologists, deciphering this memo, photographed after the ‘Roswell crash’ nearly seventy years ago could finally help solve the most enigmatic UFO mystery on Earth.

Part of the memo reads:

Ever since an alleged UFO crashed in July of 1947 new Roswell New Mexico, countless theories have been proposed explaining what EXACTLY the military came across.

Was it a real UFO? Did they discover alien bodies? And was the entire thing covered up by the Government? These questions have remained unanswered for nearly 70 years.

However, analysis of a top-secret memo could help shed light on the most mysterious UFO case of all time.

The Roswell crash has had a great weight in popular culture for decades and is mentioned in numerous works of fiction, as well as documentaries.

Officially speaking, it all started on July 4, 1947, when several farmers in the town of Roswell, New Mexico, claimed to have heard a loud explosion in the night, completely different from a lightning and thunder strike.

The next day, Gerald Anderson, a five-year-old boy who was accompanied by his father, his brother, and a cousin walking in a deserted place called Plains of St. Augustine, noticed an object in a distance reflecting light. This object was allegedly a downed UFO.

In the Book “A History of UFO Crashes”, researchers Don Schmitt and Kevin Randle say their research shows military radar had been tracking an unidentified flying object in the skies over southern New Mexico for four days. On the night of July 4, 1947, radar indicated the object had gone down about 30-40 miles northwest of Roswell.

Was this the object that crashed?

According to ‘A History of UFO Crashes’, eyewitness William Woody, who lived east of Roswell said he remembered being outside of his house with his father the night of July 4, 1947, when he saw a brilliant object plunge to the ground. 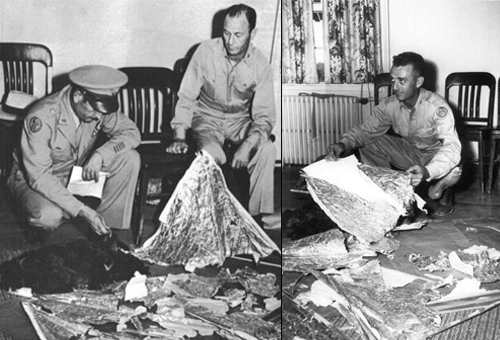 A disc-shaped UFO, recovered by the military?

The photograph of the alleged top secret memo shows General Roger Ramey in his office at Fort Worth Army Air Field, later known as Carswell Air Force Base holding a memo and crouching over the debris that were allegedly recovered from the crash site, later identified by the military as an ordinary weather balloon.

Now, Ufologists believe that in order to solve the mystery behind the Roswell crash we need to take a closer look at the document General Ramey is holding.

Experts believe that this barely readable memo could prove once and for all that the military DID, in fact, recover a crashed UFO and extraterrestrial bodies.

As reported by express.co.uk, Alejandro Rojas, a presenter for Open Minds Radio, said:

“Jesse Marcel—who was the intelligence officer who was sent to inspect and collect the material—says he was ordered to go along with the story, and like a good soldier, he did what he was told, no questions asked.”

“Incidentally, Dubois also later claimed the debris in these photos were part of a cover-up. He said the weather balloon material was set out to trick the public.”

“The weather balloon explanation was accepted by the press and the public.”

“It was not until the 1980s when witnesses like Marcel came forward that the incident began to catch the public’s attention.”

David Rudiak claims that using modern technology he was able to zoom in on the memo and decipher up to eighty percent of it.

Mr. Rojas added: “He says it is clear that there is a reference to a disc, and believes he can also make out a portion of a sentence that reads ‘and the victims of the wreck’.”

“Rudiak says this proves that a disc-shaped craft was recovered.”

“However, perhaps more startling, he says it also corroborates the claims that extraterrestrial bodies were recovered from that wreck.”