The Fascinating accounts of the ancient Egyptian star map

Ancient Egypt is one of those places that everyone has heard of, whether your mom and dad told you as a child stories about great Pharaohs that built a prospering Empire and constructed Temples to survive the test of time, to history lessons that describe every aspect of this great Ancient Civilization.

What if Ancient Egypt and its history go way beyond what we think and know of today?

Is there a real connection between the placement of the Great Pyramid of Giza and its two companions and the Constellation of Orion? If so, how would have ancient Egyptians known of this Constellation and why did they give such importance to it?

Ancient Egypt is the place where Mythology and reality are separated by a thin line.

The stars of Orion were associated with Osiris, the sun-god of rebirth and afterlife according to the ancient Egyptians. But this story is told by many other ancient civilizations that also claim that “The gods” came from the stars of Orion and Sirius.

For example, we find that Sirius is aligned to Abu Ruwash, which is 8 km to the North of Giza, and that is the site of Egypt’s most northerly pyramid, also known as the lost pyramid — the mostly ruined “Pyramid of Djedefre,” the son and successor of Khufu. If we travel to the south, we will reach the Giza Plateau where we find that the three Pyramids are aligned precisely to Orion’s three stars. Traveling further south will take us to Zawyet el’Aryan where we find two Pyramids, the first one is The Layer Pyramid and the second is an unfinished Pyramid, all that stands now is a square base on which the core of the pyramid would have been constructed. When we look for a correlation, we find that Zawyet el’Aryan is in correlation to Aldebaran or Alpha Tauri which is a red giant star located about 68 light years away in the zodiac constellation of Taurus.

The name Aldebaran is Arabic and translates literally as “the follower”, presumably because this bright star appears to follow the Pleiades, or “Seven Sisters” star cluster in the night sky. This takes us further south and so we finally reach Abusir which an extensive necropolis of the Old Kingdom period, together with later additions – in the vicinity of the modern capital Cairo. This Necropolis has a total of 14 pyramids at the site, which served as the main royal necropolis during the Fifth dynasty.

When we move south from Abusir, we will arrive at Saqqara which is a vast, ancient burial ground in Egypt, serving as the necropolis for the Ancient Egyptian capital, Memphis. Saqqara features numerous pyramids, including the world famous Step pyramid of Djoser, sometimes referred to as the Step Tomb due to its rectangular base, as well as a number of mastabas. Saqqara covers an area of around seven by 1.5 km. This region also shows correlation with the Milky Way and these structures are placed with an incredible alignment of the stars.

Moving further south from the Saqqara we will reach the Pyramids and monuments of Pepi I and Pepi II and also The Pyramid of Khendjer located between the pyramid of Pepi II and the pyramid of Senusret III in South Saqqara. Traveling in a “straight line,to” we will arrivatthe Senusret pyramid complex which was built north-east of the Red Pyramid of Dashur. Senusret’s pyramid is 105-meter square and 78 meters high. The total volume was about 288,000 cubic meters. Further, south we will find the ruins of Amenemhat II, Amenemhat III and Amenemhat I, all of these structures are a reflection of the start above, with incredible precision.

Also in lower Egypt following the Milky Way, we will find the Red Pyramid and the Bent Pyramid in perfect correlation. The Red Pyramid also called the North Pyramid, is the largest of the three major pyramids located at the Dahshur necropolis. It’s also the third largest Egyptian pyramid, after those of Khufu and Khafra at Giza. The Bent Pyramid is a perfect example of early pyramid development in Egypt, this was the second pyramid built by Sneferu. 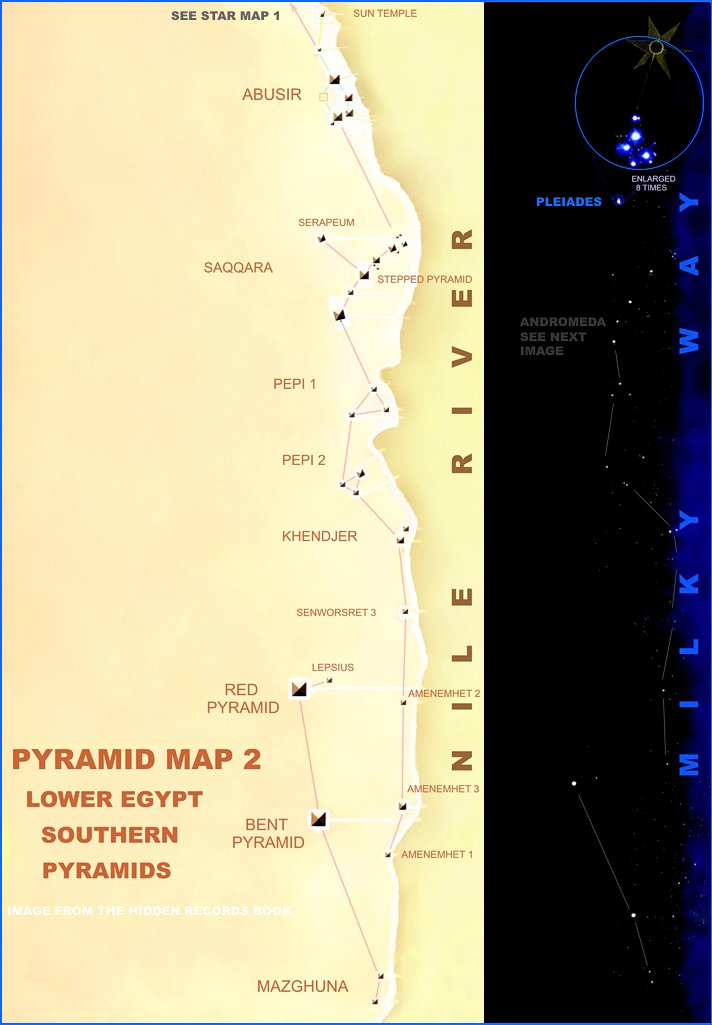 Another thing that we find amazing is the fact that the Pyramid complex at Saqqara reflects in an incredible way the Andromeda galaxy. The correlation is amazing, and so many similar attributes cannot be a coincidence. The builders and ancient engineers in ancient Egypt had incredible knowledge in Astronomy, Mathematics  Physics, Geology, and Geography.

They knew exactly how to place the monuments so that they reassembled what was in the “sky.” The Pyramid of Djoser, the Pyramid complex of King Pepi I and Pepi II, Pyramid complex of King Unas all are placed in correlation to a star in the Andromeda Galaxy and in such a way that when looking at it, the Milky way in the sky appears where the Nile river is on Earth. Coincidence? Or Knowledge?

We know that the position of these monuments was not random, we know that to ancient Egyptians and their rulers, these Stars had a significant impact in their life, everything was based on Astronomy. Their gods came from the heavens down to Earth from these Celestial destinations, and it is up to us to determine who these ” Heavenly Visitors” were in reality.

Image source and credit Wayne Herschel. Check out The Hidden Records by clicking here and find out more.