Elon Musk wants to BOMB Mars with Nuclear weapons, suggesting its the fastest way to “geo-engineer” the red planet.

The SpaceX and Tesla Motors CEO claims that nuking the red planet is the best thing we can do in order to heat up the planet and make it more optimal for humans. Pulsing Bombs would be launched towards the Red Planet exploding on Mars creating two ‘artificial suns’ above the planet in order to warm it up. The tricky thing here is that according to Musk, bombs would need to be sent every several seconds in order to maintain the planet warm.

The SpaceX founder has talked about the red planet and his theories of making it habitable once again by heating it up with nuclear bombs that would need to be dropped on Mars’ poles. He also wants to visit the planet one day.

During an interview by Mashable, Elon Musk was asked how he felt about the recent discovery of water on the red planet.

Yeah, that’s good,’ he told Lance Ulanoff and spoke about his brilliant plan to make the red planet livable AGAIN.

‘What I was talking about,’ said Musk, ‘was having a series of very large, by our standards, but very small by calamity standards, essentially having two tiny pulsing suns over the poles.

‘They’re really above the planet.

‘Not on the planet.

The “Pulsing Bombs” would create artificial suns that would heat the planet, but it’s a process and not a one-time thing explained Musk.

‘A lot of people don’t appreciate that our sun is a giant fusion explosion.’

Why would you want two suns over Mars?

‘So if you have two basically tiny suns over the pole that would warm up the planet,’ said Musk.

‘Then you would gasify frozen carbon dioxide, thicken the atmosphere and warm up the water and all of that would have a greenhouse effect. 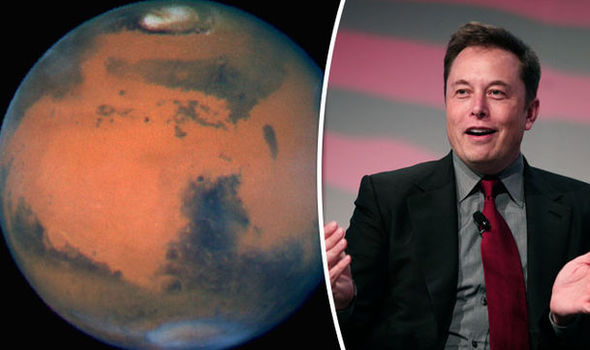 “Have a cascading effect to continue warming up the planet.’

Musk states that making Mars habitable again is a process that could be achieved slowly, with the gradual release of greenhouse gases, or could be done quickly with the aid of Nuclear Bombs. Scientists speculate that on Mars, the effects of nuclear bombs might be very different from Earth.

NASA administrator Charles Bolden seems to agree with Elon Musk that it is essential to colonize Mars.

‘It’s important for the preservation of the species, and I want to make sure that my grand-daughters, and great-great-grandaughters, have the opportunity to go there,’ he said.

President Obama seems to agree with both of them predicting back in 2010 that a manned Mars mission could happen in the mid 2030’s.

We know that Mars was once a planet very similar to Earth with an atmosphere and liquid water on its surface, but at some point in the distant past, the red planet cooled down and the atmosphere was swiped from the planet by powerful Solar Storms.