One object took researchers by surprise when they found a depiction of a strange ‘humanoid’ figure with a TRIANGULAR head, HOLLOW eyes, and an open mouth, all depicted on a withered-looking body. 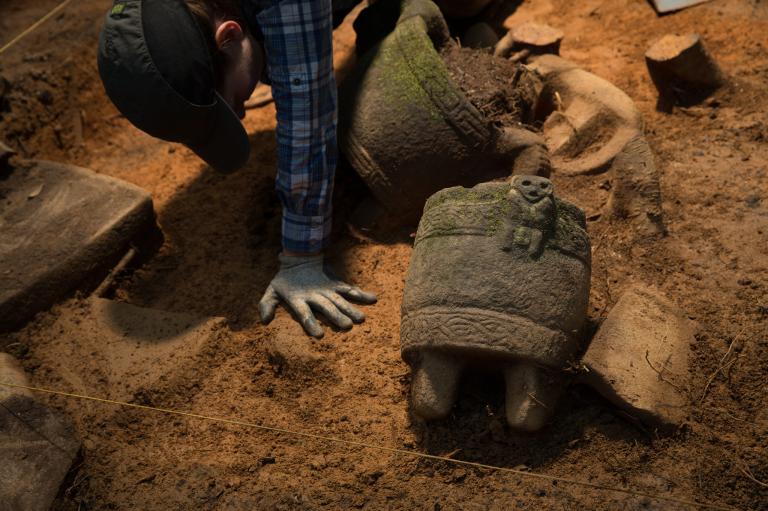 Researchers excavating in the Honduran Jungles have found over 200 elaborate artifacts that belonged to a lost city and civilization that ruled the area in the distant past.

In the last month and a half, the excavation process of the ancient lost city in Honduras has yielded an incredible number of stone artifacts belonging to a mysterious, unnamed Pre-Columbian civilization that inhabited a remote region in the Honduran Jungle.

The joint American-Honduran teams of researchers have uncovered and excavated over 200 ancient artifacts belonging to the mysterious civilization from the base of a large earthen mound at the center of the archeological site referred to by archeologists as the „City of the Jaguar“ or Ciudad del Jaguar”.

The artifacts, some intact while other are broken, were transported by helicopter to a laboratory near the city of Catacamas which was recently built to study and house the discoveries. Chris Fisher, an archeologist from Colorado State University who leads the team excavating the site, said: “It’s like a shrine.” Caches of objects have been reported in other areas of eastern Honduras, but this is the first one ever to be professionally excavated.

Researchers report that the excavated objects had been carefully put together, in a one-time preparation, placed on a special red clay floor. Archeologists state that the objects they had found were placed around a special sculpture of a vulture with partially spread wings, which was surrounded by ritual stone vessels. The rims of the stone vessels were decorated with depictions of snakes and vultures.

One of the most peculiar carvings found on the site took researchers by surprise, as they discovered what appeared to be a depiction of a strange ‘humanoid’ figure with a TRIANGULAR head, HOLLOW eyes, and an open mouth, all depicted on a withered-looking body.

Chris Fisher believes that the mysterious figure might have been a representation of a ‘death figure’.

Another interesting object is without a doubt the leg of a broken metate with pseudo-glyphs which according to experts, vaguely resemble a Maya Sky Band, an abstract depiction of the night sky. Interestingly, the leg of the broken metate has a mysterious Swastika-like engraving depicted at its center.

According to archaeologists, the mysterious artifact found in the so-called ‘City of the Jaguar’ date back to the Mesoamerican Post-Classic period, somewhere between AD 1000 and 1520.

Among the more surprising findings in the city is the ‘were-jaguar’ head, the object that gave the city its current name, believed to represent a shaman in a half-animal, half-human state.

This ancient city was rediscovered in 2012 when aerial surveys used pulses of laser light to map the ground. The ‘city of the Jaguar’ was hidden under triple-canopy jungle, located in a then, unexplored valley surrounded by mountains in a remote region of the Honduran Amazon know as ‘La Mosquitia’.

As for why the city was abandoned, researchers have a few theories. While they still have no proof to support any of them, scholars believe that the epidemics brought by Early Europeans was the most likely cause the City of the Jaguar was abandoned. According to researchers, during the 1500s, European diseases—smallpox, measles, and influenza—were raging across the islands of the Caribbean, killing up to 95 percent of indigenous inhabitants.

According to archaeologists, a staggering 200 square feet encompasses the excavated area of an enormous archaeological site which includes the remains of over 19 prehistoric settlements, previously unknown to scholars.

Researchers believe that even though today, the City of the Jaguar is relatively isolated, during its peak, it probably was the center of trade and commerce in a vast region.

“When you’re here today,” Fisher said, “you feel so disconnected. It’s a wilderness, and it’s hard to imagine you’re even in the 21st century. But in the past, it was in the midst of an intense network of human interaction. It wasn’t isolated at all.”