Explorers discover the ancient ruins of the Lost ‘City of... 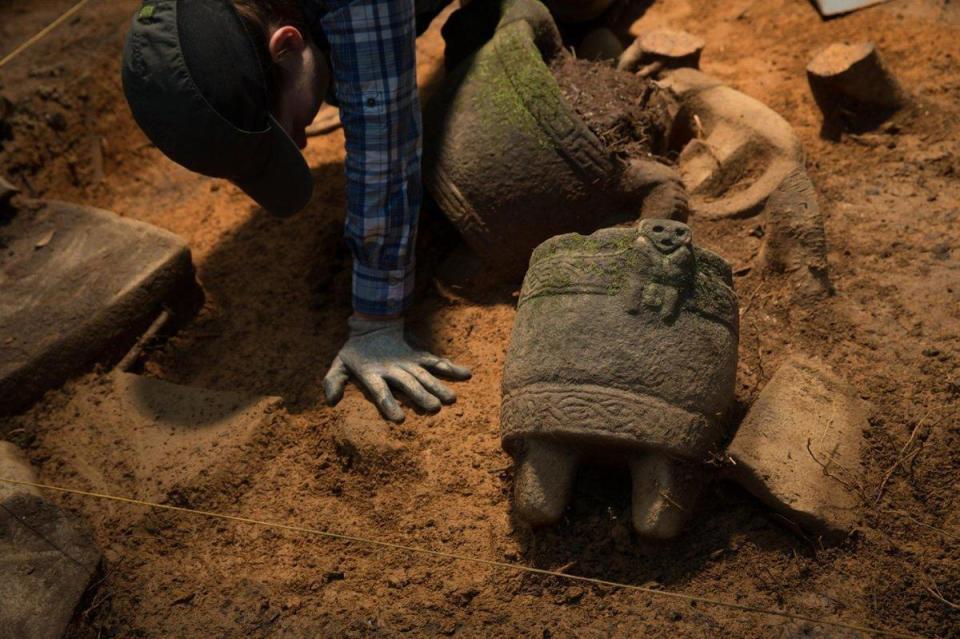 The ancient city is believed to have been abandoned by its residents in the 16th century when they thought the city was cursed. Now, experts who have made a groundbreaking discovery, were struck down by an aggressive, rare tropical disease which literally eats through the face.

Now, the group of archaeologists and explorers who were performing surveys on the site were struck down by an aggressive, rare tropical disease which literally eats through the face.

According to reports, several of the expedition team got home only to realize they had contracted the face-eating parasitic disease Leishmaniasis.

“The parasite migrates to the mucous membranes of your mouth and your nose, and basically eats them away,” Preston explained. “Your nose falls off, your lips fall off, and eventually your face becomes a gigantic, open sore.”

The team of explorers, including best-selling novelist Douglas Preston, were exploring the previously untouched ruins of Ciudad Blanca, also known as the ‘City of the Monkey God’, excavated last year in the middle of the jungle.

According to initial reports, the ruins of the Lost ‘City of the Monkey God’ date back to between 1,000 and 1,500 AD. The city is believed to be filled with incredibly rare, ancient artifacts hidden beneath the ground.

According to reports,  the city was abandoned by its inhabitants sometime during the 16th century after they thought it was ‘cursed’ by disease.

The ancient city was thought to be only a legend, completely lost, with knowledge of its existence being kept alive only through folklore. For hundreds of years the ancient city remained hidden in the jungle, covered by soil and thick layers of vegetation, in the border between tropical Honduras and Nicaragua.

Last year, the ancient site was visited by Honduran President Juan Orlando Hernández, who said: “We are blessed to be alive at such a special time in Honduran history. This discovery has created a lot of excitement because of its significance for Honduras and the world.”

Experts have managed to discover dozens of artifacts hidden in the city, among them a stunning vessel with vulture-shaped handles, a tray with a jaguar’s head made from clay and a stone-made throne carved with another jaguar.

Interestingly, the area is inhabited by the Pech and Payas indigenous groups, who long spoke of such a site. The first written reference came in 1544, in a document written by Spanish Bishop Cristobal de Pedraza.

The first mention of the city came in Hernando Cortes’ fifth letter to King Charles V of Spain in 1926, when he wrote that it will ‘exceed Mexico in riches’:

“…I have trustworthy reports of very extensive and rich provinces,’ he wrote, ‘and of powerful chiefs ruling over them, and of one in particular, called Hueitapalan, and in another dialect Xucutaco, about which I possessed information six years since, having all this time made inquiries about it, and ascertained that it lies eight or ten days’ march from that town of Trujillo, or rather between fifty and sixty leagues.”

“So wonderful are the reports about this particular province, that even allowing largely for exaggeration, it will exceed Mexico in riches, and equal it in the largeness of its towns and villages, the density of its population, and the policy of its inhabitants.”