Believed to have been built during the Parthian Empire (247 BCE–224 CE) and restored during the Sassanid era (3rd to 7th century AD), the Great Wall Of Gorgon is a incredible and sophisticated defensive construction located in north-eastern Iran, it has around 30 military forts, an aqueduct, and water channels that go along the route. It is commonly known as “the Red Snake” because of the construction materials used, red colored bricks.

Archaeologists believe that it is 1000 years older than the Great Wall of China, and longer than Hadrian’s Wall and the Antonine Wall put together. This incredible fortification begins at the Caspian coast, circles north of Gonbade Kavous, continues towards the northeast, and disappears in the Pishkamar Mountains. It is also known as the Great Wall of Gorgan, the Gorgan Defence Wall, Anushirvân Barrier, Firuz Barrier and Qazal Al’an, and sometimes Sadd-i-Iskandar, (Persian for dam or barrier of Alexander) and in the past this construction was 195 km (121 mi) long and 6-10 m (13-33 ft) wide.

Gorgan is one of Iran’s most ancient regions and is located to the Caspian Sea’s southeast. The region has been a part of the Median, Achaemenid (559-333 BC), Seleucid, Parthian (247 BC-224 AD) and Sassanian empires in the pre-Islamic era, it is a goldmine for historians and archaeologists and the great wall of gorgon will only add to the interest of these scholars.

Until recently scholars could not agree on who built this incredible wall, with their theories ranging from from Alexander the Great, in the 4th century BC, to the Persian king Khusrau I in the 6th century AD most researchers agreed that the wall was constructed in the 2nd or 1st century BC. Scientific dating, the OSL and radiocarbon samples demonstrated that the Wall was built in the 5th, or 6th century AD, by the Sasanian Persians.

It is an incredible achievement  in design and construction and is only second to the Great Wall of China as the longest defensive wall discovered today. Archaeologists suggest that it could have been built more solidly than the early forms of the Great Wall. It is larger than Hadrian’s Wall and the Antonine Wall taken together, it is one of the World’s Greatest Frontier Walls and it has been called the greatest monument of its kind between Europe and China. This 195km long wall required a huge amount of labor for its construction. 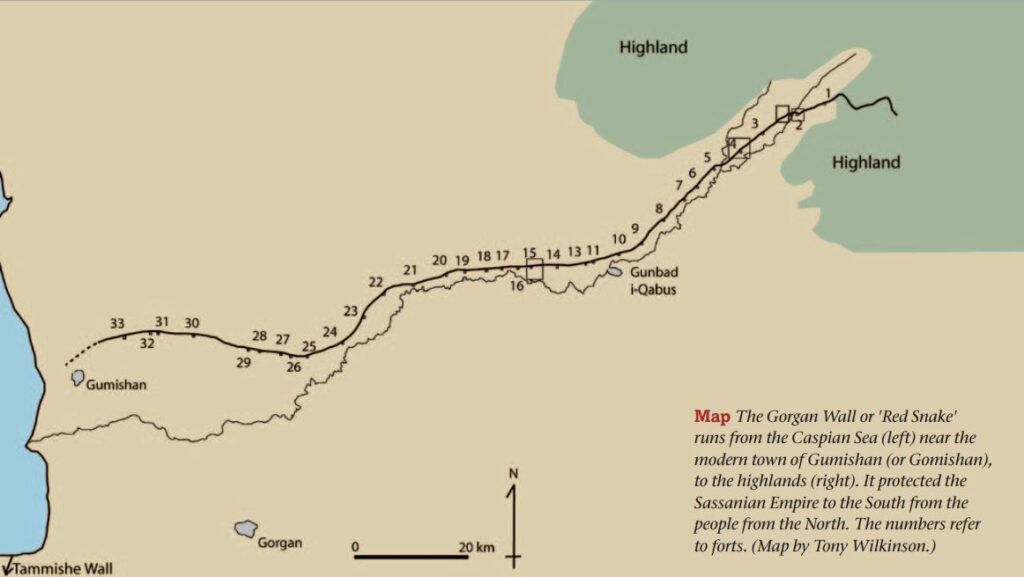 Water was one of the main problems due to the semi-arid area, the water required for manufacturing bricks and for the use by the inhabitants of the forts was not readily available therefore it was brought to the building site via a series of canals that then directed the water into the ditch on the north side of the Wall. Although researchers believe this ditch was clearly a defensive feature, study suggests that it also must have been used as the source of the soil for the bricks that were used in the construction process of the Great Wall of Gorgan.

It was a sophisticated military construction and researchers believe that the forts were occupied as densely as those on Hadrian’s Wall, putting the garrison on the Gorgan Wall around 30,000 men. And it is thought that the ‘Red Snake’was a defense system that was put together against the White Huns, who occupied parts of Central Asia.

No ancient textual source refers to this Wall, no inscription has been found, and no coin has ever been found on it, history records know little to nothing about this incredible construction probably many of us have never heard of until now.

The studies and research on the Great Wall Of Gorrgan challenge the Euro-centric world view in many aspects. At the time in history when the Western Roman Empire was under pressure and collapsing slowly, the Eastern Roman Empire was also under great pressure from both political and military issues, the Sasanian-Persian Empire was able to gather the  necessary economy and manpower to build and garrison a monument that would withstand many factors of a much greater scale than anything comparable in the west at that time. According to this research, the Persians seemed to have matched, their Roman rivals in several aspects; army strength, organisational skills, engineering and water management.