Astronomers have detected SEVEN Earth-like planets orbiting a star called Trappist-1. According to scientists, all seven planets are very similar to Earth and have oceans of liquid water on their surface. Three of the alien worlds are so perfect that scientists say LIFE may have already evolved on them. 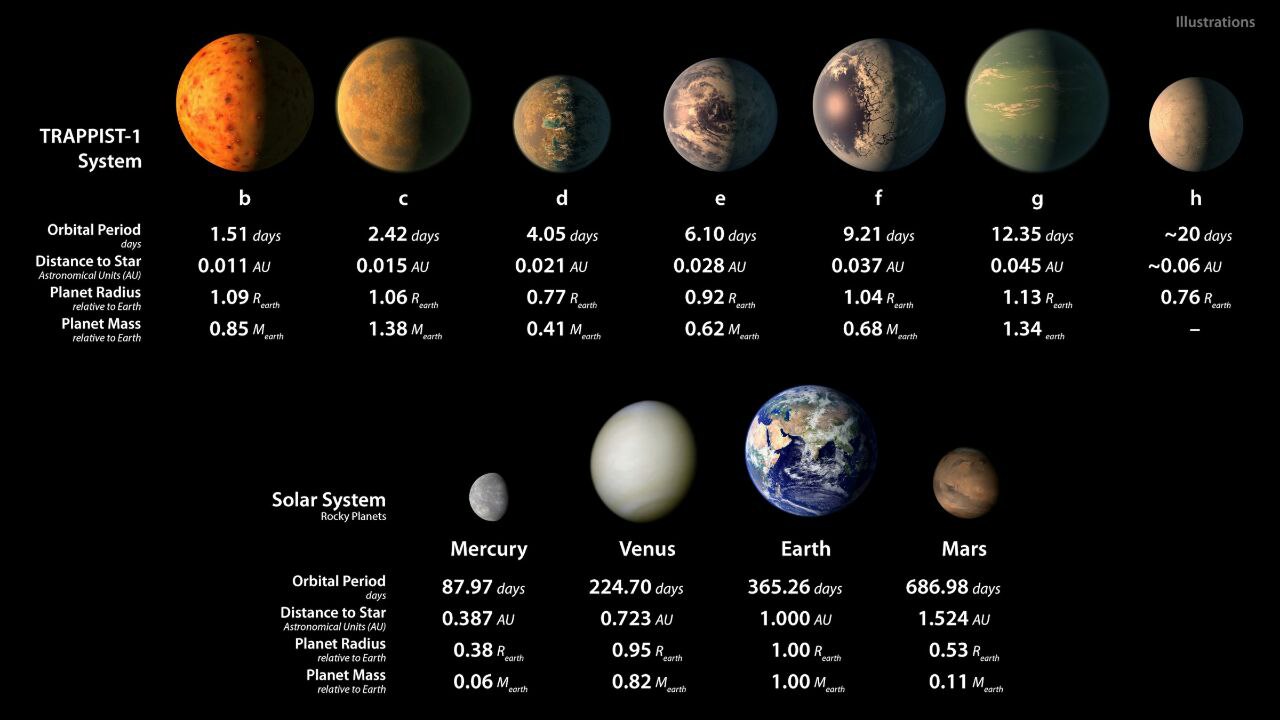 The Seven Earth-like planets have been found orbiting a nearby dwarf star called ‘Trappist-1’, and ALL of them have WATER—a key component for life—on their surface.

In fact, three of the alien worlds are so perfect that scientists say LIFE may have already evolved on them.

Astronomers say that the planets are positioned so close to one another, that they are located within a space five times smaller than the distance from Mercury to our sun

According to scientists, we will find out whether or not there is life on any of the planets within the next ten years, as astronomers boast ‘this is just the beginning’.

This discovery is unprecedented since no other solar system has ever been found to have such a large number of Earth-like planets.

Astronomers say that all of the planets orbiting Trappist-1 have a rocky composition just as our world, and are nearly the same size. Furthermore, astronomers say that six out of the seven planets have surface temperatures which range between 0-100 degrees celsius.

According to reports, TRAPPIST-1 barely classifies as a star at half the temperature and a tenth the mass of our sun. It is a red, dim star and is just a bit larger than Jupiter.

“I think we’ve made a crucial step towards finding if there is life out there,” said Amaury Triaud, one of the study authors and an astronomer at the University of Cambridge. “I don’t think anytime before we had the right planets to discover and find out if there was (life). Here, if life managed to thrive and releases gasses similar to what we have on Earth, we will know.”

Scientists say that these conditions give the planets—located 39 light years from Earth— vital atmospheric composition in order to host life as we know it.

“This is the most exciting result I have seen in the 14 years of Spitzer operations,” said Sean Carey, manager of NASA’s Spitzer Science Center at Caltech/IPAC in Pasadena, California. “Spitzer will follow up in the fall to further refine our understanding of these planets so that the James Webb Space Telescope can follow up. More observations of the system are sure to reveal more secrets.”

The most important thing is that experts believe that three of these planets—located in the star’s habitable zone—probably have oceans just like those on Earth, with life evolving on them already.

The study’s lead author Michaël Gillon of the STAR Institute at the University of Liège in Belgium was delighted with the results: “It’s a surprising planetary system, not only because we have found so many planets, but because they are all strikingly similar in size to the Earth.”

“We now have seven planets that we can study in detail for life, and this is something we are already doing, people will hear more and more about this system in the coming months and years.”

All of the planets—labelled 1b-1h—orbiting Trappist-1 were found using the ‘transit’ method: When the orbit and characteristics of the planets are measured as they transit in front of their star, causing it to dim. Both space-based and Earth-based satellites were used to make the discovery.