Is this the most incredible UFO video ever?

According to a video recording made in southern California, a crashing UFO appears in the sky hurling towards Earth, at one point during the video, a mysterious bright light is seen emerging from the ‘object’ travelling back into space. 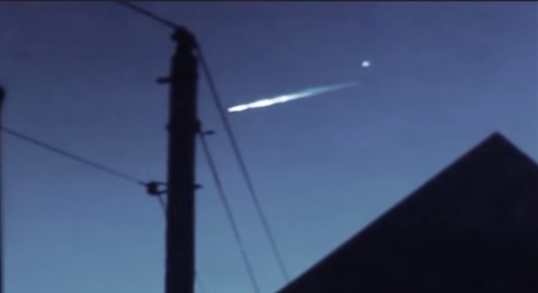 According to the witness who claims to have filmed the object falling towards Earth, he noticed a mysterious fireball burning up in the sky. He stopped over and recorded what looked like ‘something’ crashing from space and releasing what Ufologists are calling a ‘escape pod’.

“I was driving home after work when this UFO or whatever you call it caught my eye. I pulled over in front of somebody’s house to film it. I would have got a better shot but I didn’t want to jump these peoples fence. Anyway, I don’t know what the hell to make of it. Couldn’t have been a plane because there was no noise. And I never heard a crash after either. The Orb thing flew straight up into the sky and disappeared. Sorry, I didn’t film that. I didn’t know what to focus my attention on.”

The video has been posted last year and since then, numerous theories have been proposed trying to explain what it was. Skeptics firmly believe this is just another CGI, fake video.

In the video, the burning object isn’t as interesting as is what happens half way through the recording when a smaller ‘glowing orb’ is ‘released’ from the object burning up over Southern California.

While there are numerous other videos of similar objects falling from the sky, it is noteworthy to mention that the object seen ‘detaching’ from the original UFO travels in a completely opposite direction, and it is unusual that smaller parts can in fact fly off just like that, which has lead many people to believe that the smaller object is, in fact, some sort of ‘space pod’ with its own propulsive force.

In his accounts, Roberts explains hat he did not follow its trajectory because his camera was focused on the main body of the “crashing” UFO.

Is this another Fake?

According to the Mutual UFO Network (MUFON) and the American Meteor society, the public did not report any sightings at the time Roberts claims to have seen the UFO crashing towards Earth, releasing what some call an ‘escape pod’.

However, The American Meteor Society did report that people in California did report a fireball crashing towards Earth on Saturday, January 3rd, but no objects were reported on the day Roberts claims to have recorded the UFO.

One user : ‘I think the Meteor isn’t completely perpendicular with the cameraman, but the falling object IS, which makes it appear to be faster than the meteor.’

Metabunk.org has tagged the video as a hoax: “This appears to be a hoax, with faked camera motion added in Adobe After Effects, as explained in this video by HoaxKiller.”

Whether or not the mysterious UFO is real, and the orb seen flying away in opposite direction is, in fact, an escape pod or not as some people believe is hard to tell. However, there are many people who believe this is a legit UFO sighting while skeptics remain confident that this is just another fake UFO video.