Life on Mars? UFO hunters discover secret base on the...

In another incredible claim, UFO hunters suggest they have found what appears to be a secret base on the surface of the red planet that proves there is life on Mars. 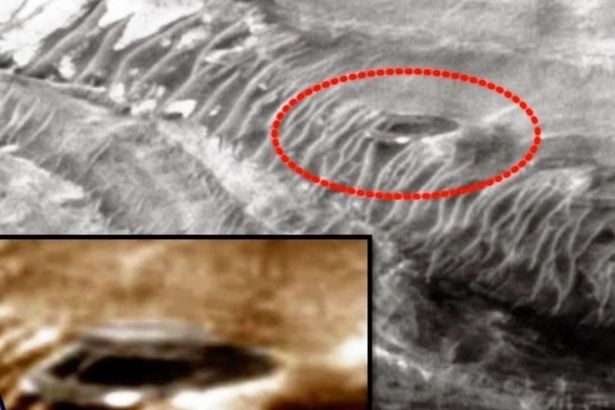 According to claims, the image found on Google Mars clearly depicts a ‘military-style base’ on the red planet.

While the image does show a mysterious and recognizable darker object on the planet’s surface, its hard to tell what it is, if of course, it is anything at all.

The video of the discovery was posted on YouTube where users from around the world gave their opinions on the matter. According to commentary alongside the video: „This can only be described as a large base, that sort of looks like a military installation”.

“NASA has done a good job of hiding a lot of these objects. Many times, what they’ll do if the objects are too sharp and the resolution is too high, they’ll simply erase the object.”

While many skeptics remain unconfident that there are any indications that Mars supports life, or that it did so in the distant past, many scientists have changed their views on Mars drastically over the last decade. Among the scientists who believe there’s more to Mars than what we are willing to accept are Dr. Brandenburg and Lewis Dartnell, a UK Space Agency researcher.

While the two theories differ in some views, both of them have agreed that Mars was hospitable in the distant past, and ancient Martian civilizations called the planet their home.

Mr. Dartnell believes that early microscopic life forms developed on Mars Millions of years ago, but major environmental events made Mars completely inhospitable. Mr. Dartnell’s hypothesis of life on Mars came after researchers from NASA found out, with the help of the Curiosity Rover, unexpectedly high levels of water beneath the surface of Mars and also separate evidence that it once had a continental crust, much like ours.

Dr. Brandenburg, on the other hand, believes that Mars had life in the distant past and that it had more the enough time to develop into intelligent organisms. According to Dr. John Brandenburg, there is enough evidence to prove that at least two major nuclear blasts went off on the surface of the red planet in the distant past. The theory proposed by Dr. Brandenburg is based on the traces of uranium and thorium that have been registered on the surface of Mars. This Martian civilization was wiped out by another hostile alien race from elsewhere in the universe.

Whether or not the mysterious ‘military base’ found by using Google Mars is evidence of anything is up for debate. But, looking at Mars from another perspective and open-mindedly, we can say that it nearly impossible for life not to have flourished on Mars. Maybe in the distant past of the red planet, conditions for life were ideal and civilization developed on Mars, and today, while exploring the planet with our satellites and rovers, we are observing the remains of an ancient civilization that flourished on Mars.