According to a set of ‘lost tapes’ from the Apollo Missions, the crew of Apollo 10 heard mysterious, unsettling music coming through their headsets when they were orbiting the far side of the moon 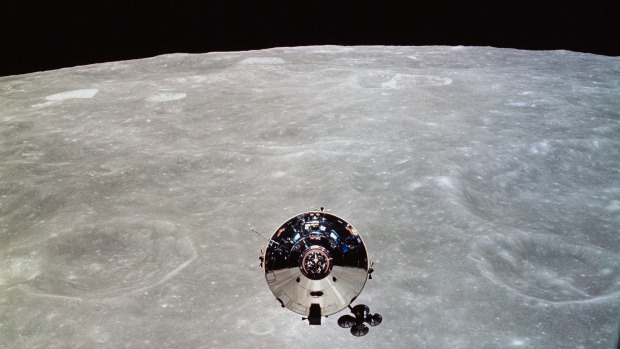 The astronauts were so startled when they encountered the mysterious radio transmission they were unsure whether or not they should report it to NASA.

The recordings which were declassified in 2008 will air on the Science Channel’s NASA’s Unexplained Files this month. In the recording, we notice the astronauts reacting with surprise and confusion when the mysterious sounds overtook their headsets.

At one point into the trip, NASA astronauts are heard debating whether or not they should contact NASA and reports the occurred.

Another astronaut says he can: ‘It sounds like, you know, outer space-type music.’

‘Well, that sure is weird music,’ his companion agrees.

“Shall we tell [NASA] about it?” an astronaut asks.

“I don’t know,” another answers. “We ought to think about it.”

According to reports, the mysterious ‘otherworldly’ sound lasted nearly for an entire hour, during the time the capsule was at the far side of the moon. Back on Earth, the recording was kept away safely from the public, that is until 2008 when it became publicly available.

The recordings have now resurfaced thanks to Science channel’s series NASA unexplained files, raising numerous questions about the Apollo missions and the truth behind the recordings, the moon landing and whether or not, the anomalous sounds have something to do with NASA avoiding the moon for decades.

“The Apollo 10 crew was very used to the kind of noise that they should be hearing. Logic tells me that if there was something recorded on there, then there was something there,” Apollo 15 astronaut Al Worden says on the Science Channel program. “NASA would withhold information from the public if they thought it was in the public’s best interest.”

“You don’t hear about anything like that until years after the incident occurs, and then you kind of wonder, because it’s such an old memory of those things that you get concerned about if they were making something up or was there something really there? Because you never really know,” Worden told The Huffington Post in an interview.

“If you’re behind the moon and hear some weird noise on your radio, and you know you’re blocked from the Earth, then what could you possibly think?” Worden said.

“We’d had a lot of incidents where guys who flew in space saw and heard things that they didn’t recognize, and you wonder about all of that. I have a very open mind about what could’ve happened. It’s somebody’s hearsay evidence — it’s only a visual or audio event, which is hard to pin down. Recollection is one thing, but actual proof is something entirely different.”

NASA’s unexplained files which analyze the mysterious recordings trying to come up with solutions in order to explain from where the sounds might have originated, including a magnetic field or atmosphere which could have interfered with the radio from the capsule orbiting the moo. However, according to experts, the moon does not have a magnetic field and not enough atmosphere to create such sounds.

This is why, many people have started speculating that the mysterious signals intercepted by accident during the Apollo mission could have come from ‘Aliens’.

The enigmatic Apollo 10 DSEA voice transcript (in PDF format) can be found by clicking here.