In the middle of South America, there is a strange and almost perfectly spherical island that moves on its own. The landmass in the middle —called the Eye— floats on a pond of clear and cold water which is extremely strange and in contrast to its surrounding area. The bottom appears to be solid in comparison to the marsh around it.

Until now, no one has tried explaining ‘ The Eye’ or unraveling its many mysteries.

Looking at the story behind this mysterious island, many people have come forward claiming that “a circle inside another circle represents God on Earth,” — and as paranormal investigators point out— regardless, the area deserves much more interest.

Google Earth has been the place to go to if you are looking to explore the surface of the planet like never before. For years this tool has been used by researchers, scientists and ordinary people around the globe to make fascinating discoveries.

This time Google Earth reveals a mysterious island located in the Tarana Delta between the cities of Campana and Zárate, Buenos Aires, Argentina.

There, in a little-explored and swampy area, is a mysterious spherical island that is nearly 100 meters in diameter and moves —seemingly on its own from side to side— ‘floating’ in the water channel that surrounds it.

Its discoverer is an Argentine filmmaker who investigates paranormal phenomena, UFO cases, and alien sightings. 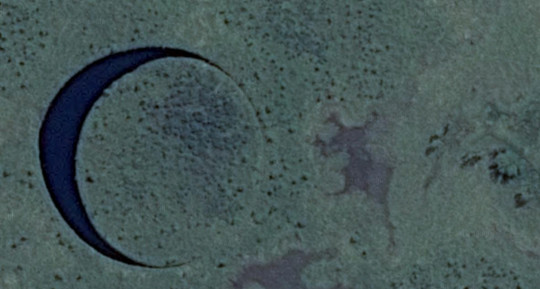 How is such an island even possible? Is it the result of an unknown natural phenomenon that we have rarely seen on Earth? How has it lasted so long without deforming? And what caused its initial formation?

Is it possible that the nearly perfect spherical island is connected to UFO activity in the area? Or is there something underneath it that causes the mysterious island to move erratically?

The truth is that if we look back at the historical records of Google Earth we will find that ‘The Eye’ has been visible on satellite images for over a decade and has apparently always moved in a mysterious way as if it were seeking attention from anyone looking from above.

According to website paranormalnews.com, Pablo Suarez from Boston University who does dynamic systems modeling said that he had not run across anything like it. To him, it does not appear to be a crater or to have been caused by any typical natural phenomenon.

Gustavo Sznaider, who works at a company specializing in satellite surveillance, stated he had never seen anything like it before either, in spite of the years of experience he’s had analyzing imagery of the Earth.

Don’t forget to visit the website http://elojoproject.com/ for more information and stop by the Kickstarter Campaign.