The Nephilim were a race of giants who came to dominate before the Great Flood; these mysterious beings are referred to in ancient texts as Giants, descendants from the Fallen Angels. They were the product of illicit relations between fallen angels and human women before the flood and Noah’s Ark.

The word ‘Nephilim’ is the is the untranslated pronunciation of untranslated Hebrew. Nephilim: fallen feller: a tyrant or bully, Giant and in some English translation the Nephilim are referred to as giants. Interestingly, in the Greek Septuagint ‘Nephilim’ was used to describe giants.

However, the name ‘Nephilim’ is also frequently  used when describing the race of giants who inhabited Canaan at the time of the Israelite conquest according to Numbers 13:33.

There is considerable confusion surrounding these mysterious beings which according to ancient texts were real and inhabited Earth in the distant past.

Looking at ancient texts, we will notice that in the Hebrew Bible, the word ‘Nephilim’ occurs on two occasions, both times in the Torah, the first one being in Genesis 6:1-4, just before the story of Noah’s ark, and the second in Numbers  13:32–33 when spies sent to Canaan reported seeing ‘fearsome giants’.

Genesis 6:4: The Nephilim were in the earth in those days and also after that when the sons of God came in unto the daughters of men and they bore children to them; the same were the mighty men that were of old, the men of renown.

Numbers 13:33 And there we saw the Nephilim, the sons of Anak, who come of the Nephilim and we were in our sight as grasshoppers and so we were in their sight.’

It is perhaps obvious to interpret the Nephilim as how they are described: a hybrid race between TWO DISTINCT BEINGS. This leads us to one of the most important and controversial questions when talking about the Nephilim: Were they a hybrid extraterrestrial species? Well, according to the above facts, the answer is a resounding yes!

Most authors will firmly agree that the Nephilim were, in fact, a hybrid race between the ‘fallen angels’ called the Benei Ha’Elohim (“Sons of God”) in Hebrew meaning that these beings were not native to Earth, but were, in fact, heavenly beings, descendants of the fallen angels.

Interestingly, in many ancient religious texts, the Nephilim are referred to as Giants or Titans, while many other ancient texts have failed to explain what these beings were.

In the Bible it clearly states (and is used as a traditional interpretation) that ‘heavenly beings’ mated with humans; an extremely controversial claim rejected by many.

In the Book of Enoch the following texts is used to describe the Nephilim:

“It happened after the sons of men had multiplied in those days that daughters were born to them elegant and beautiful. And when the angels, the sons of heaven, beheld them, they became enamoured of them, saying to each other “Come, let us select for ourselves wives from the progeny of men, and let us beget children.” Then their leader Samyaza said to them, “I fear that you may perhaps be indisposed to the performance of this enterprise; And that I alone shall suffer for so grievous a crime.”

But they answered him and said, “We all swear!”

That mountain therefore was called Armon, because they had sworn upon it and bound themselves by mutual execrations. [Mt. Armon, or Mt. Hermon, derives its name from the Hebrew word herem, a curse.]

Then they took wives, each choosing for himself; whom they began to approach, and with whom they cohabited; teaching them sorcery, incantations and the dividing of roots and trees.

And the women conceiving brought forth giants,

Whose stature was each three hundred cubits. These devoured all which the labor of men produced; until it became impossible to feed them; When they turned themselves against men in order to devour them; And began to injure birds, beasts, reptiles, and fishes, to eat their flesh one after another and to drink their blood. Their flesh one after another. [Or, “one another’s flesh.” R.H. Charles notes that this phrase may refer to the destruction of one class of giants by another.]

Then the earth reproved the unrighteous.

Moreover Azazyel taught men to make swords, knives, shields, breastplates, the fabrication of mirrors and the workmanship of bracelets and ornaments, the use of paint, the beautifying of the eyebrows, the use of stones of every valuable and select kind and all sorts of dyes, so that the world became altered.

Impiety increased; fornication multiplied, and they transgressed and corrupted all their ways.

Amazarak taught all the sorcerers, and dividers of roots: Armers taught the solution of sorcery; Barkayal taught the observers of the stars, Akibeel taught signs; Tamiel taught astronomy, And Asaradel taught the motion of the moon,

And men, being destroyed, cried out; and their voice reached to heaven.” – Enoch 6-7. 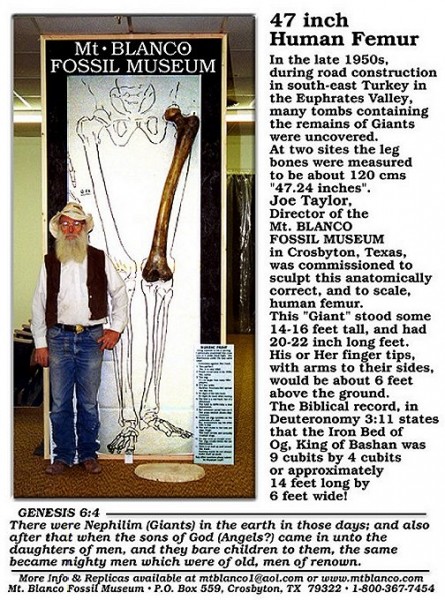 From all of the above mentioned, we can understand that, while there are numerous documents making reference to the Nephilim, it is clear that these beings were not natives to Earth and were, in fact, a hybrid species, only half human in nature.