Moment when a UFO appears next to the International Space...

Another video showing a strange object appearing next to the ISS has surfaced on the Internet. Moments after the UFO is seen next to the International Space Station, NASA mysteriously cut off the live feed. 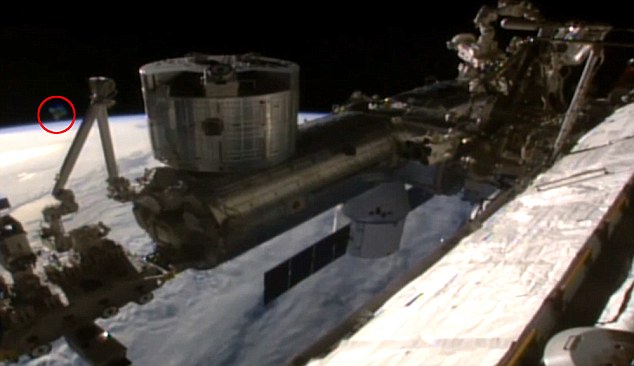 Is it possible that the ISS captured a footage of an Unidentified Flying Object during its orbit around Earth? According to many people who observed the live feed provided by NASA, a strange UFO appeared next to the International Space Station just before the feed is mysteriously cut.

In the past, when a UFO appears on the live feed from the International Space Station NASA cuts off the video supply immediately. This has led numerous people to believe that NASA is trying really hard to keep extraterrestrial visitations to Earth a secret.

This new footage has prompted another debate among conspiracy theorists and skeptics about whether or not the mysterious object that was seen floating alongside the International Space Station is or not an extraterrestrial craft.

The clip, which you can see below, shows a glowing blue object slowly closing into the International Space Station while rotating on its own axis.

Then the feed is mysteriously cut for around an hour after which it usually resumes, in this case, the moment only a faint small light is seen in the distance where the UFO was previously visible.

This has led many people to conclude that NASA cut off the live feed on purpose, allowing the UFO to move away from the International Space Station, promoting the idea that the object seen in the new video is, in fact, a lens flare as many skeptics suggest.

Like many other videos in the distant past which apparently show UFOs, this one too was spotted by Scott Waring who posted it to UFO Sightings Daily and wrote: ‘I saw a UFO at the space station.

‘It was diamond shaped, and it seemed to be changing its shape, but I think that’s due to it moving ever so closer to the ISS.’

He claimed that shortly after the sighting the screen turned blue, which is NASA’s way of attempting to ‘hide it from the public’.

The video was also posted by SecureTeam 10 on their YouTube channel. Speaking about the mystery footage, the narrator from the video said:

‘When you play this footage quickly, it looks like the UFO changes its position.

‘When we first see it, it’s more on its side, but when you cycle through the footage it seems to be maneuvering more on its face.

‘It’s definitely another interesting find and once again directly after it appears NASA cuts the feed.’

He later added: ‘The only time when the feed tends to get cut is oddly when these UFOs appear.’

In the last couple of months, the number of UFO sightings around the International Space Station has increased exponentially which has lead many people around the world to believe that many of these strange objects are not just space debris and satellites as skeptics claim, concluding that many of the UFO’s seen around the ISS could, in fact, be spacecraft from otherworldly civilizations.