The high-resolution camera of one of the NASA rovers exploring the red planet has detected a very mysterious bright ‘light’ in the Martian horizon of unknown origin. 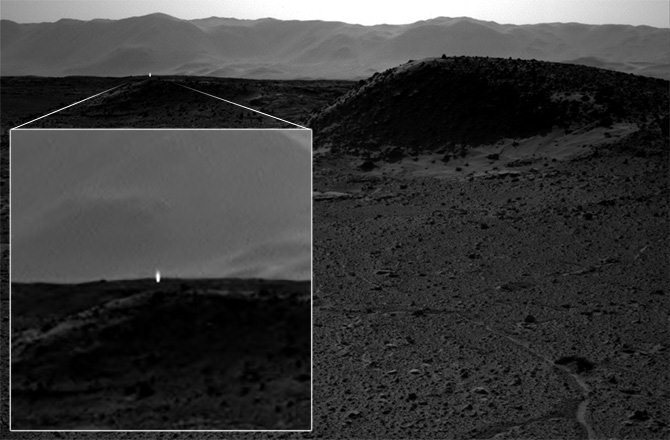 Researchers are unsure as to what this mysterious phenomenon is and are still investigating all possibilities, even though like with many other images that show anomalies on Mars, this one too will most likely be forgotten.

The photograph in question, taken over a year ago has been analyzed by scientists at the US space agency at the Jet Propulsion Laboratory in Pasadena, California, without any luck as they have failed to answer what causes the mysterious bright light that appears to be coming from underground. No official statements have been made regarding the image.

The photograph from the Martian horizon was released by Scott C. Waring, a specialist who deals with similar phenomenon investigating space, Mars, and our Moon on his website, UFO Sightings Daily. Most striking, as noted in the description, is that the light is shining on the bottom upwards and does not seem to be an error in the image itself.

Scott Warring wrote: “This could indicate that three could be intelligent life living underground and this image is the ultimate evidence. The bright light seen cannot be caused by the sunshine nor by a photographic effect“.

Interestingly, the image was taken in Kimberly, a region on Mars which was believed to have important evidence of the past on Mars.

You can view the official RAW image from NASA by clicking here.

The image has given rise to all sorts of speculation of what might cause the mysterious light. Most skeptical viewer believe that we are actually looking at cosmic rays. Because of the fact that space is filled with radiation and Mars has a very thin atmosphere, high energy particles-a form of radiation known as “cosmic rays” – hit the red planet and may not be blocked by the atmosphere or the geomagnetic field as It occurs on Earth.

The brightness that seems to come out of the Gale crater as seen in the photograph of the Martian horizon isn’t really a light, but a cosmic ray that „struck” Curiosity’s camera when the rover was taking the picture.

However, the downside of this embattled explanation is that the mysterious light does NOT appear only in ONE photograph. In unofficial statements, Justin Maki, a scientist at NASA and expert in images said: “it is possible that the flash was produced by the reflection of the sun on a Martian rock. When these images were taken every day, the sun was in the same direction west-northwest from the rover, and relatively low in the sky.”

Maki also noted that the light appears only in the right camera of the probe. When an object appears in both rover cameras, it would be possible to explain the anomalies origin and distance to it, but if it doesn’t appear on both cameras, it is very likely that we are actually looking at cosmic ray bombardment.  However, we cannot verify that since –strangely—it has not been possible to verify what it is because the image of the second cameras was blocked out, he said.