Do These NASA Images Prove There Are ‘Alien’ Structures On...

Whenever you put the words moon, alien, and base into one sentence you get the perfect recipe for a conspiracy theory.

The moon itself is a mysterious place, not only because we know very little about it, but because it has greatly influenced society throughout history.

In modern times, now that we have the means to travel there and explore it like never before, we have begun to unravel its mysteries which have fascinated explorers and scientists for hundreds of years.

But just how ridiculous is it to think there are ‘alien’ structures on the moon? For all we know, there aren’t any but then again, a large percentage of the population still lives in disbelief that NASA made it to the moon with the Apollo missions.

Curiously, in July of 1970, two Russian scientists, Mikhail Vasin and Alexander Shcherbakov, published an article in the Soviet journal Sputnik called “Is the Moon the Creation of Alien Intelligence?”

The theory proposed by the two experts offers arguments that would explain the countless enigmas surrounding the moon and its creation.

Shcherbakov and Vasin proposed that massive machines were used to melt rock and form long cavities within the Moon, spreading the molten refuse onto the lunar surface.

The advanced their theory by saying that the moon was preserved by a hull-like inner shell in addition to a reconstructed outer shell of metallic rocky junk, and eventually, this enormous craft was steered through the cosmos and finally put in orbit around our planet.

Now I’d say that’s a conspiracy theory, it’s just that the above theory was proposed by two scientists from the Soviet Academy of Sciences.

Why on Earth would there be alien structures on the moon?

The big question a lot of people ask today is, “are governments around the world covering up information on Extraterrestrial life?”

Officially speaking no, after all, there are no such things as aliens, right?

However, due to a HUGE number of top-secret documents recently released to the public, some people would beg to differ.

There are certain images and videos taken by space agencies around the world which have fueled Conspiracy Theories throughout the years.

In this article, we take a peek at supposed images from NASA that ‘undoubtedly’ show what appear to be artificial structures on the lunar surface.

To understand what we are looking at, we need to remember NASA’s LCROSS mission, referred colloquially as the mission when NASA ‘nuked’ the moon.

The Lunar Crater Observation and Sensing Satellite (LCROSS) was a robotic spacecraft operated by NASA. The mission was conceived as a low-cost means of determining the nature of hydrogen detected in the polar regions of the moon.

The LCROSS mission was developed for scientists to study the moon like never before. The spacecraft was designed to collect and relay data from the impact and debris plume resulting from the launch vehicle’s spent Centaur upper stage–Centaur is a rocket stage designed for use as the upper stage of space launch vehicles and is currently used on the Atlas V– striking the crater Cabeus near the south pole of the Moon.

On October 9, 2009, at 11:31 UTC, Centaur successfully impacted the moon, and the Shepherding Spacecraft descended through Centaur’s ejected plume, collected and relayed data.

Some ufologists and conspiracy theorists call the LCROSS mission the day when NASA bombed the moon, and that their mission wasn’t scientific in nature.

The ‘Alien Base’ images

We’ve seen plenty of images that supposedly show ‘alien’ structures on the moon. Countless conspiracy theories have been born as a result of these images, but most of them are just the result of wild interpretations.

The photographs you will see here are from NASA employee’s, at the AMES research center.

The images supposedly slipped out during an interview by project scientists Anthony Colaprete and Dr. Kim Ennico while they reviewed early results from the Centaur impact.

In the images on the table, you can see what UFO hunters refer to as evidence of structures, clear geometric shapes that cannot be confused in any way as “natural formations” or “moon rocks”.

So, let us check out the evidence. 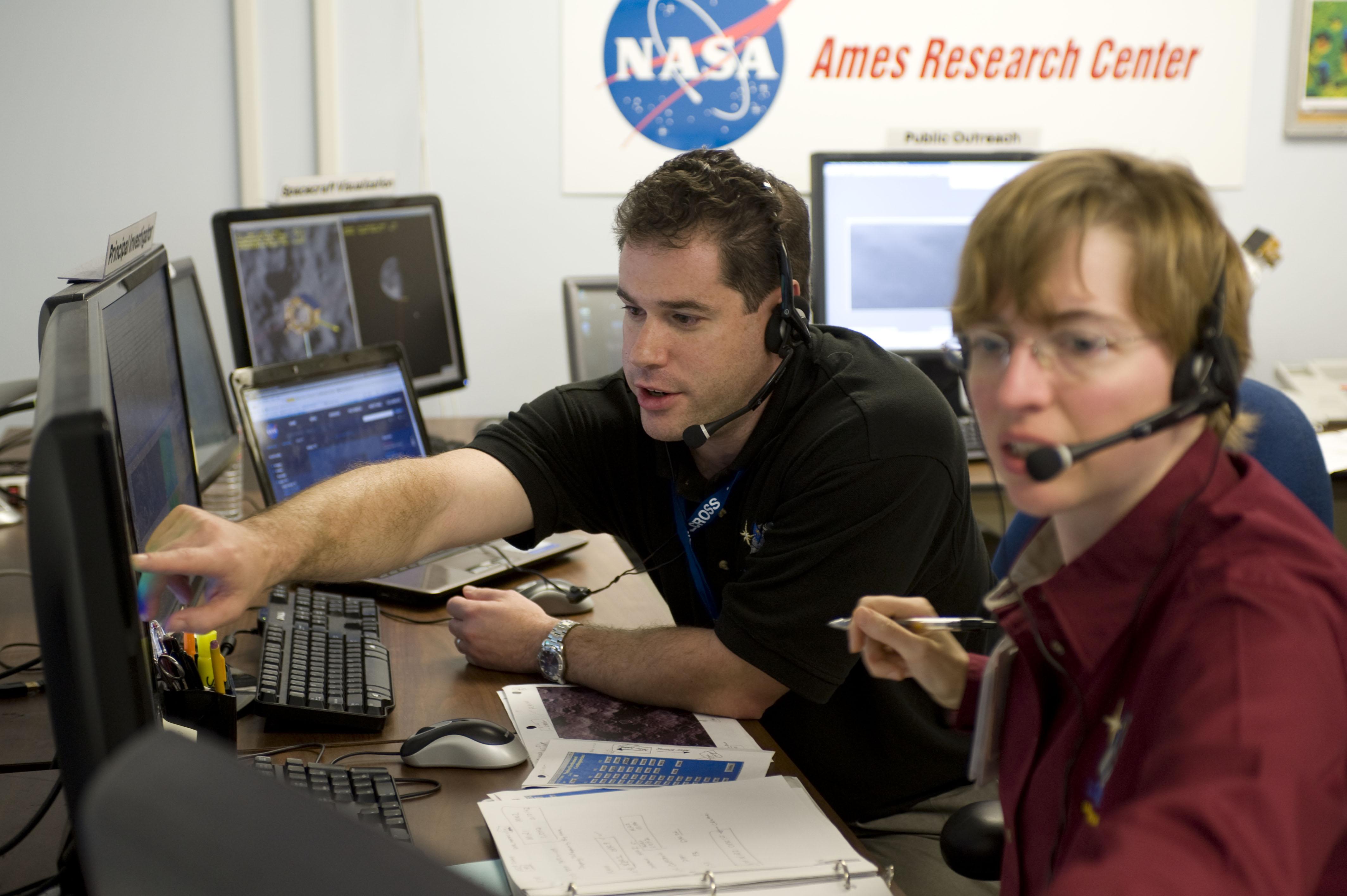 The above image, taken at NASA’s Ames Research Center shows two mission scientists going through data. The curious image, which allegedly shows alien structures on the moon is the one located just beneath the arm of the scientists to the left of the image. 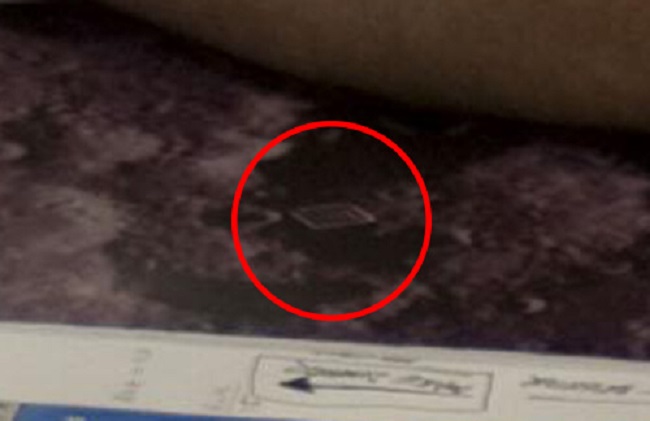 Now that looks a bit strange, doesn’t it? It looks like some sort of rectangular structure sitting there, on the surface of the moon.

The curious part is that, according to UFO hunters, this rectangular ‘moon building’ happens to be located inside the Cabeus crater, near the south pole of the Moon.

So, what do we have here? Is this a conspiracy theory that might just be onto something? Or is this, as many other images that are dubbed as ‘ultimate evidence of alien structures’ nothing more than the result of Pareidolia perhaps?

If you ask UFO Hunters, these images are evidence that there are countless structures on the lunar surface, and some of them may be the result of an ancient astronaut presence.

What do you make of the images? Are UFO hunters really onto something? Are there alien bases on the moon? Or is all of this just a huge conspiracy theory backed up with no evidence whatsoever?