It seems that Mars has more to offer than we initially believed. According to UFO hunters and ufologists, Mars is filled with surprises and NASA hasn’t been very honest about everything they have found on the surface of the red planet.

In one of the images beamed back by NASA’s very own Alien robot, a couple of months ago, researchers claimed to have found a pyramid half buried in the Martian soil. A huge debate was initiated among people in social media whether the ‘structure’ Curiosity had found was an actual pyramid.

Check out the RAW image from NASA by visiting this link.

Now, another image has surfaced the internet showing what appears to be ‘another’ pyramid located on Mars. While there are many people who remain skeptical about the fact that Mars was inhabited in the distant past and that this is just another coincidental rock formation of the red planet there are others who believe that it is very possible that the red planet was inhabited by intelligent beings in the distant past and that the geometry of the structure suggests it is an artificially created construction and is not, in any way Pareidolia or tricks of light and shadow.

People who have looked at the image say that the angles and lines of the pyramid are believed to be a telltale sign that differentiates a natural formation from a manmade one.

If you look at the surrounding landscape where the ‘new’ Martian pyramid was found, you will notice that there are no similar pyramidal-shaped formations anywhere in the vicinity. Does this mean it has to be an artificial pyramid? Not according to geologists.

The newly found pyramid on Mars has raised yet another set of questions which researchers are unable to answer. What if this “newly discovered” pyramid is the crucial piece of evidence that has been missing all along? What if this isn’t a natural formation as many suggest… Is it possible that the Pyramid is in fact the product of extraterrestrial civilizations on the red planet in the distant past? Many suggest that the evidence of intelligent life on the red planet has been abundant, yet we all have decided to ignore it for some reason. 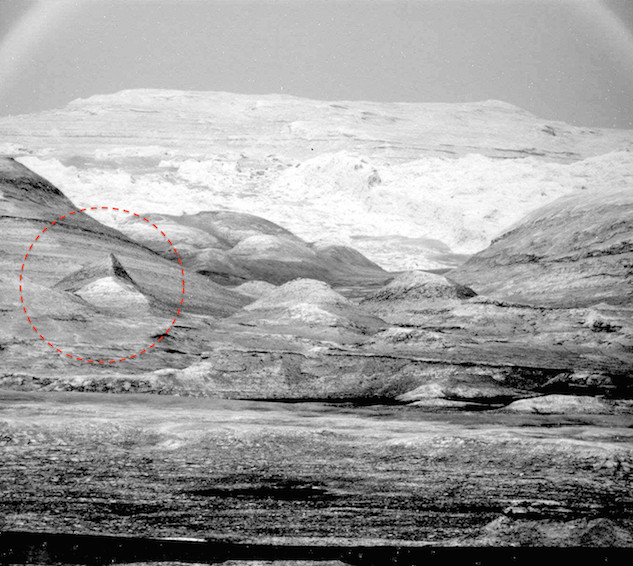 Interestingly, Dr. John Brandenburg believes that an old Martian civilization was wiped from the face of Mars in the distant past. Dr. John Brandenburg has a Ph.D. in Theoretical Plasma Physics from the University of California and he is currently working as a plasma physicist at Orbital Technologies in Madison Wisconsin.

What if… the ‘structures’ that have been identified in the images beamed back by NASA’s rovers are in fact the remains of a once great Martian civilization that was destroyed as Dr. Brandenburg suggests?

According to Dr Brandenburg, ancient Martians known as Cydonians and Utopians were massacred in the giant nuclear attack – and evidence of the genocide can still be seen today. Ufologists completely agree with Dr Brandenburg and suggest that there are countless pieces of evidence scattered across the Martian surface which point to the existence of a once great Martian civilization.