Achilles: The Real Story Of The Legendary Warrior

Greek and Roman mythology and culture have long been at the forefront of pop culture and study in western society. There’s just something so intriguing about it all—the gods, the legends, the art.

Not only are there many myths and stories, there are many versions of these stories. With such a wealth of material, it’s no wonder that the myths of Ancient Greece are a common source of adaptation for theater, literature, and film.

One of the most iconic figures in all of Greek mythology is, of course, Achilles—they fierce warrior whose body was completely invulnerable except for his heel. While the full story of Achilles is quite complex and entertaining, however, his representation in Hollywood has unfortunately been oversimplified and watered down.

Below, we’ll get into just how Hollywood got it wrong and take a closer look at the real story behind the legendary warrior.

How Hollywood Watered Down The Story Of Achilles 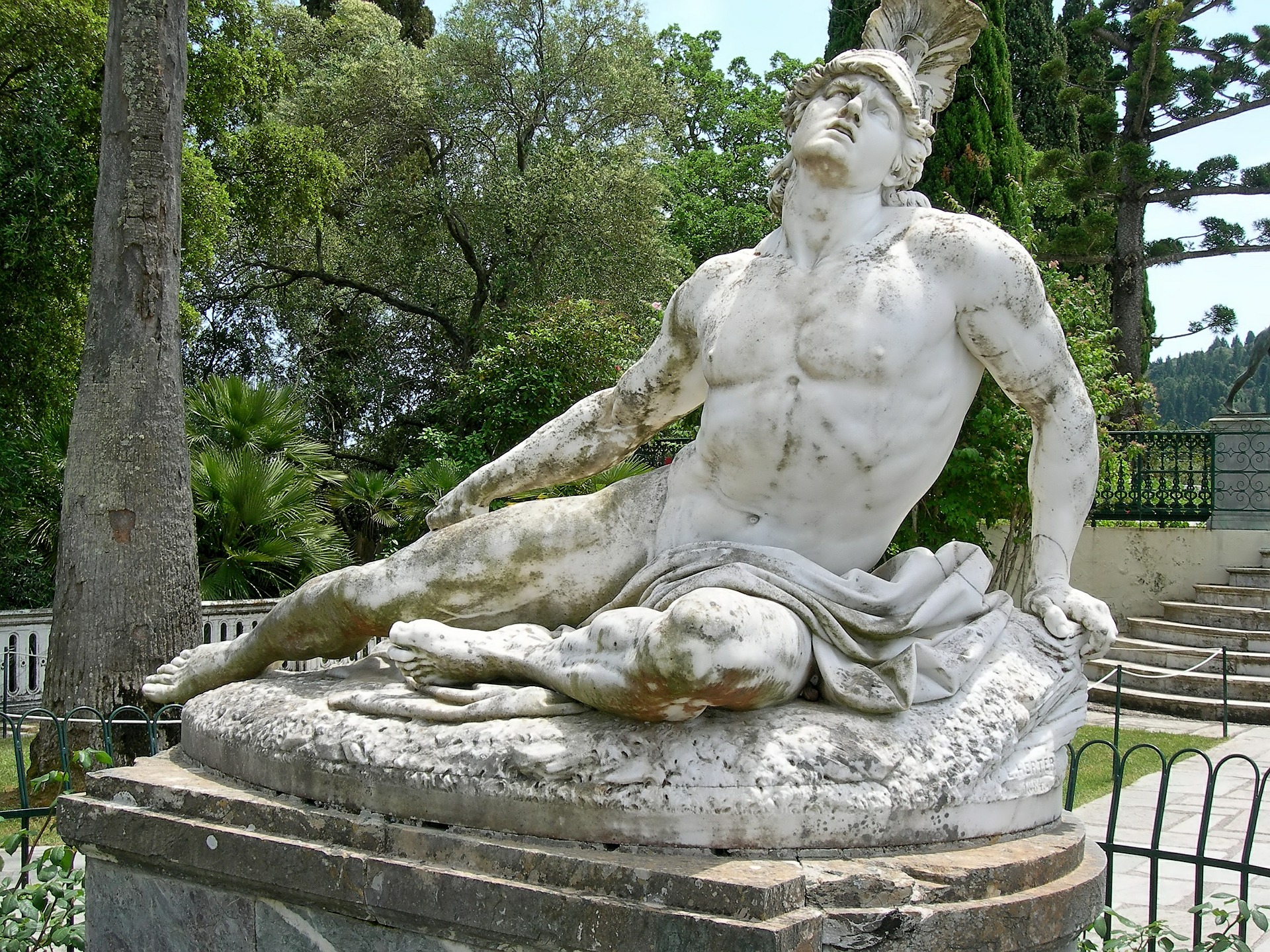 Perhaps the most iconic portrayal of Achilles by Hollywood to date is the move Troy, which tries to take a historical approach to the events of the Trojan War by removing all the gods, nymphs, and magic.

Considering Achilles is well-known as a demigod and his tale is rife with godly interference, this is already an interesting choice.

But let’s give that a pass for a moment and determine if the film accomplished what it set out to do: portray an accurate historical account.

Unfortunately, it falls short there as well.

For starters, after she has run off with Paris, Troy’s version of Helen claims that she never wanted to move to Sparta in the first place and that she was forced to marry Menelaus. That’s interesting, considering Helen is actually from Sparta and the daughter of the preceding king and queen.

The movie also kills off key players such as Agamemnon and Ajax before the war’s end, while there is actual historical evidence that suggests the two made it out of the war alive, at least for a time. These are just a few of the historical inaccuracies that plague the film. For a more detailed discussion of historical inaccuracies in the film, check out this review posted on The Guardian.

In terms of the portrayal of Achilles himself, there’s a lot to be desired. Sure, no one can complain about too much Brad Pitt, but the way his character is written is just poor. Pitt’s Achilles is constantly reluctant to take action and constantly in bed with women—which may not be entirely inaccurate, but the Achilles of legend was at least more proactive and complex.

You’ll find out in our recounting of the story of Achilles below why there’s a particular problem with the portrayal of Achilles’ sexuality.

The True Story Of Achilles

Achilles was the son of Peleus, the king of Phthia, and Thetis, a minor sea goddess.

Interestingly enough, Achilles could have been the son of either Zeus or Poseidon, both of whom were pursuing Thetis. However, it had been prophesized that Thetis would bare a son who would surpass his father—and so both these gods quickly changed their minds about that. It was decided that Thetis should marry a mortal man to therefore limit her son’s potential.

It was also prophesized that Achilles would die in battle. Thetis, being an immortal herself, was already distraught at the thought that her son would eventually die in the first place, and so she took measures to ensure that his death would be as delayed as possible.

This is the part of the myth that most people are most familiar with: Thetis, dipping all but the heel of her son’s body into the River Styx in order to make him nearly invincible. Because the heel was not dipped, however, he was left with one vulnerable spot on his body—thus giving arise to the term “Achilles’ heel.”

There is another version of how Achilles invulnerability came about, however. In this version, Thetis would nightly anoint him with Ambrosia and place him in the fire as part of a purifying ritual. When Peleus discovered this, he didn’t understand and refused to listen to Thetis, and so she returned to the sea.

Getting Pulled Into The War

As a child and young man, Achilles spent much of his time under the tutelage of the centaur Chiron, the famous trainer of heroes. It was under his instruction that Achilles became the legendary fighter he was known as. In his youth Achilles also became friends with Peleus and, more importantly, Patroclus.

When it became clear that the Trojan War would break out, Thetis acted once again to keep Achilles out of harm’s way. As for her methods, well… ”unconventional” is a good way of putting it.

She sent Achilles to live in the court of King Lycomedes—disguised as a girl. That’s another thing the movie got wrong—who here doesn’t want to see Brad Pitt in a full-on dress?

Of course, nothing can stand in the way of fate—when yet another prophesy was delivered that the Greeks wouldn’t be able to defeat the Trojans without the aid of Achilles, Odysseus, the famous trickster himself, went to find him. And, of course, Achilles joined.

The first nine years of the war were relatively successful for Achilles. Under him, his troops overtook a dozen Trojan cities and Achilles developed a fierce reputation on the battlefield.

It was also during this time, however, that Achilles started the chain of events that would eventually lead to his demise.

Against his mother’s advice, Achilles killed Tenedos, the king of Tenes. Tenedos also happened to be the son of Apollo. Nothing ever good comes of killing a god’s child.

Events Of The Iliad

It is only the final year of the Trojan War that is told in Homer’s famous Iliad.

This chapter of Achilles’ life begins with Achilles convincing Agamemnon to return Chryseis, whom he had recently claimed as a spoil of war, to her father, a priest of Apollo. (Background on Agamemnon: the brother of Menelaus, who was married to Helen before Paris stole her away.)

Agamemnon was none to happy about this, and so he demanded Achilles’ own concubine, Briseis. This naturally does not go over well, either, and Achilles refuses to further participate in the war.

Despite the pleas of his friends, in the light of the prophecy of his death that his mother has now revealed to him, Achilles opts to live a quiet life in obscurity. Things divulge into a sorry state for the Greeks, leading Achilles’ closest friend Patroclus to dress in Achilles’ armor and impersonate him in battle. Unfortunately, Patroclus is slain by Hector, the brother of Paris—and Achilles’ anger is ignited.

When Achilles returns, he swiftly kills Hector and the tide of the war turns in favor of the Greeks. Though with his dying breath Hector foretells of Achilles’ impending death, it does not actually take place before the end of the Iliad.

It is none other than Paris, the brother of Hector and lover of Helen who caused the whole war in the first place, who eventually kills Achilles.

He does so by firing an arrow that finds its target in Achilles’ singular vulnerable spot: his heel. Paris was known for being somewhat of a coward and certainly didn’t have a reputation as an archer. It is therefore believed that Apollo, the god of archery himself, guided the arrow—finally taking his revenge on Achilles.

The Biggest Change To Achilles’ Character In Modern Media

Let’s back up for a moment and re-discuss Patroclus, the friend who impersonated Achilles and died from it.

It is the relationship between Achilles and Patroclus that is perhaps the most misrepresented in Troy and other retellings. While many choose to read the close relationship between Achilles and Patroclus as strictly platonic, you have to ignore a great deal of language and content that suggest the more likely alternative: that the two were lovers.

The movie Troy annihilates this possibility altogether by stating that Patroclus is in fact Achilles’ cousin. This does not do justice to the relationship between the two men. It is only after Patroclus’ death that Achilles returns to battle. While it’s possible that he has gone to avenge a friend, the stakes are raised in the knowledge that he has gone to avenge a lover.

It’s not surprising that Hollywood would choose to erase this aspect of Achilles’ character, especially back in 2004. It fundamentally changes the dynamic of the entire story, even though it is often overlooked.

In a way, Troy not only removes the gods from its telling of the story of Achilles, it also removes its humanity.

With such a rich mythology and complex dynamics, we can only hope that the next crack Hollywood takes at portraying Achilles will be a better one.