Researchers discover a massive spiral-shaped structure and a set of...

New findings suggest the temple of Angkor Wat was bounded by a ‘mysterious structure’ of 1.5 km in length

According to researchers from the University of Sydney, this new discovery will literally redefine Angkor Wat’s history

Eight buried towers and the remains of a massive spiral-shaped structure have been discovered under the ancient temple of Angkor Wat in Cambodia, which, in the light of the new findings is believed to be much larger than previously thought.

In the new project called The Greater Angkor Project, researchers learnt that the Angkor Wat complex is much larger than previously believed, with a number of components that were not visible prior to the study. Researches also discovered that the complex was bounded on its southern side by a ‘unique and massive structure’. 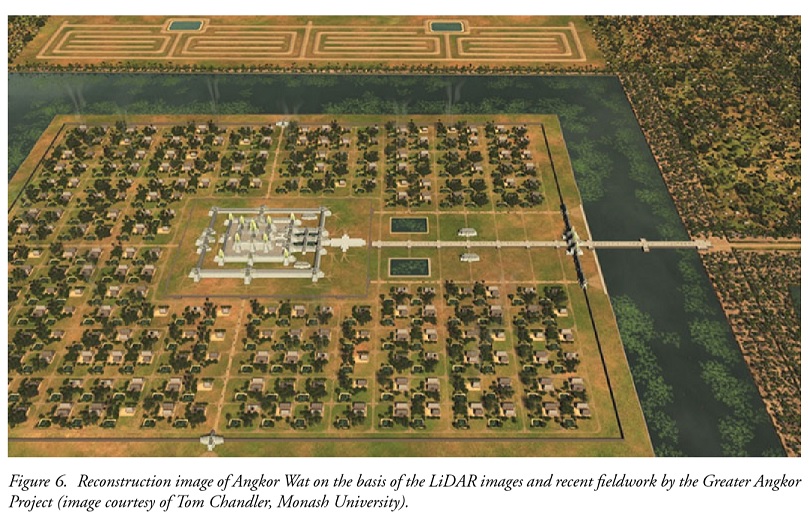 “This structure, which has dimensions of more than 1500m×600m, is the most striking discovery associated with Angkor Wat to date.”

“Its function remains unknown and, as yet, it has no known equivalent in the Angkorian world,” said Professor Fletcher, from the University’s Department of Archaeology.

Another discovery made through archaeological excavation and ground penetrating radar, were the remains of what appear to be eight towers of sandstone and laterite (a type of rock) in the western part of Angkor Wat. Although dating is not entirely accurate, researchers believe the towers were erected in the mid-12th century when the complex was under construction.

According to researchers the towers form a square which could have been sued in the past to provide support for a much larger structure. Experts believe the structure might have been some sort of sanctuary that was used during the construction of Angkor Wat.

“The configuration of the buried towers point to the possibility that a sanctuary could have existed on the western side of the platform at Angkor Wat during the time the main temple was being built,” wrote one of the researches in an article published by the Journal Antiquity.

“Once the main temple was completed, the sanctuary was destroyed.”

The areas surrounding the temple were believed to have been sacred precincts of ‘temple cities’, but new research has revealed the existence of low-density residential occupation in the area. Researchers have discovered a grid of roads, ponds, mounds and other structures which were believed to have been used by people servicing the temple complex.

“This challenges our traditional understanding of the social hierarchy of the Angkor Wat community and shows that the temple precinct, bounded by moat and wall, may not have been exclusively the preserve of the wealthy or the priestly elite,” said Dr Fletcher.

The group of researchers has also found out that the temple complex was in fact fortified with wooden structures in the distant past. According to statements from Dr Fletcher, the results reveal how Angkor Wat may have made its last attempt at defense.

“Angkor Wat is the first and only known example of an Angkorian temple being systematically modified for use in a defensive capacity,” he said.

“The available evidence suggests it was a late event in the history of Angkor, either between AD 1297 and 1585, along with other defensive works around Angkor, or perhaps sometime between AD 1585 and the 1630s, representing a final attempt to defend Angkor against the growing influence of [neighbouring city] Ayutthaya. Either date makes the defences of Angkor Wat one of the last major constructions at Angkor and is perhaps indicative of its end.”