Dated between the eleventh and twelfth centuries, a team of experts from the Netherlands has discovered a Buddhist statue that surprisingly, houses an incredibly well preserved mummy. While the team of researchers was examining the interior of the statue, they discovered pieces of paper with ancient Chinese characters. The findings has been categorized as beyond incredible.

Through extensive analysis by computer and endoscopy, scientists took samples from the thoracic and abdominal cavities of the mummy they were surprised at finding a material that has not identified.

On the outside, the relic looks like a large statue of Buddha. But after research, experts have shown that on the inside there is a mummy of a Buddhist monk who lived around 1100 years ago.

According to researchers, the mummy corresponds to the remains of Buddhist Master Liu Quan, whose bone material samples were taken to identify DNA. The results will be announced at a later date in a monograph on master Liu Quan. The finding could confirm the old theory of Buddhist monks in Yamagata, Japan, who performed rituals of self-mummification. Then they reached their last days of life, the monks sat in a meditation posture covered with paper mache, painted with golden colors. Only a small tube was left so they could breathe through it while awaiting to reach the state of nirvana. After a period of time the monks would die due to starvation. 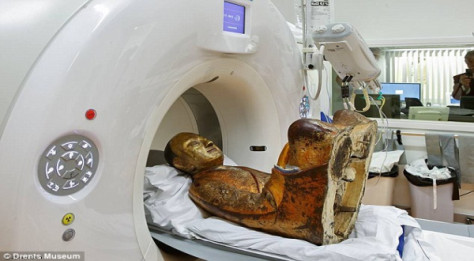 This historical statue inside which the mummified remains of Master Liu Quan were found, is part of an exhibition at the museum of Drent in the Dutch city of Amersfoort, marking the first time the statue has left Chinese territory.

One of the most respected curators of the center where the mummy is located, Dr. Zoltan Korsos qualifies this as an surprising finding as the mummy remains intact inside the relic.