“They appear human, but they are not. Their anatomic structure is different.”

Despite the fact that the alleged mummified remains of ‘an unknown species’ discovered in Peru have been dismissed by mainstream scientists as a hoax, a number of researchers believe that the ‘three-fingered’ mummies with elongated skulls, found in Peru in 2017 are real alien remains.

The Russian scientist claims to have performed DNA tests on one of the mummies, providing evidence they are not human. 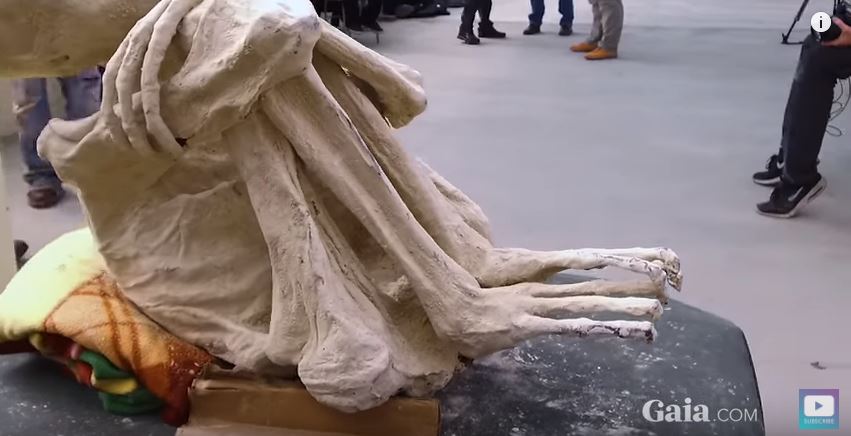 The ‘expert,’ Dr. Konstantin Korotkov, professor of Computer Science and Biophysics at Saint-Petersburg Federal University firmly believes the mummies are in fact the mummified remains of ancient ‘aliens.’

However, Professor Korotkov is known for extraordinary claims. The researcher was widely criticized after claiming to have invented a device that has the capability to ‘photograph’ the human soil in 2008.

One of the alleged mummies from Peru, called Maria, was found by a group of experts led by one of the most famous Ufologists and paranormal authors of America, Jaime Maussan.

According to preliminary tests, Maria, the Peruvian mummy discovered in a tomb near the Nazca Lines lived during the fifth century AD.

Poting towards the strange shape of the skulls as well as elongated fingers, researchers were convinced they had found a species unlike any other on Earth.

Interestingly, back in 2017 when Jaime Maussan and his team discovered the weird mummies, Dr. Korotkov of Saint-Petersburg University said that the features were not a deformity and that the discovery was actually ‘another creature, another humanoid.’

Nearly a year later, Dr. Korotkov says he has performed genetic tests on a set of tissue samples from the mummies, reports Russian News Agency Sputnik.

Genetic tests have shown that Maria “is a humanoid being, meaning that she also has 23 chromosomes like us.”

“Right now, we are performing a detailed analysis to see if the shape of the position of all the chromosomes, of all the amino acids, coincides with ours,” Konstantin Korotkov, said speaking to Sputnik.

However, experts note that the rib structure of the Peruvian mummy greatly differs from that of an ordinary human.

“We see the contours of the trachea and the bronchi, of the heart and its chambers; we can even see the shape of the valves. We can also see quite clearly the contours of the diaphragm, the liver, and the spleen,” radiologist Natalia Zaloznaya said.

Researchers have also found what the mysterious ‘white’ substance covering the mummies was. According to reports, the ‘alien mummies’ were covered with cadmium chloride – a chemical whose antibacterial effect has kept Maria and the other mummies so well preserved.

And despite the fact that the mummies look eerily similar to humans, they are anything but that.

As noted by Dr. Korotkov, “Each of the mummies has two arms, two legs, a head, a pair of eyes and a mouth. Tomographic scans have revealed their skeletons. The tissue is biological in nature, and their chemical composition indicates that they are humans. Their DNA features 23 pairs of chromosomes, just like humans have. All the four of them are males, each with a Y-chromosome. And despite the fact that they appear human, they are not. Their anatomic structure is very different.”

During Dr. Korotkov’s visit to Peru, the Russian researcher was shown four more mummies, 70 centimeters each.

Dr. Korotkov says that the mystery 70CM mummies all have three fingers and an extremely elongated skull. The mummies have another mysterious characteristic according to Korotkov; their Nasal cavity is missing, and their superciliary arches are not pronounced.

“Most surprisingly, the mouth cavities are there, but the lower jaws are not flexible and present a single whole with the rest of the skull, said Kortovov speaking to Sputnik.

When asked about what the mysterious beings could be, the Russian expert answered:

“They could be extraterrestrials or bio-robots,” he added. “As for the 70cm creatures I’m not sure, but Maria and Vavita could have been representatives of a certain race which had possibly reached a stage of advancement much earlier than we did. Maybe thousands of years earlier.”

“By the way, three-fingered creatures can be seen on petroglyphic drawings found in Peru,” Korotkov added, suggesting that ancient inhabitants of Peru may have seen these strange beings alive.