Russian Scientist, the South American Civilization is at least 1000...

According to a new study by Russian Scientist, the South American Civilization could be a thousand years older than previously thought if not older.

Archaeologists from the Russian city of Novosibirsk believe that American Civilization could be much older than previous estimates thanks to the discovery of a Pyramid in Ecuador. Scientists from the Institute of Archaeology and Ethnography of the Russian Academy of Sciences, Novosibirsk, have admitted the existence of a platform of land in the Ecuadorian archaeological site of Real Alto, in the coastal province of Santa Elena, which could demonstrate the existence of an ancient civilization belonging to the Valdivia culture. The discovery of this structure would have enormous consequences for the history of South America, since it would mean that the civilization on the South American continent is a thousand years older than what was estimated previously by scholars. (s0urce) 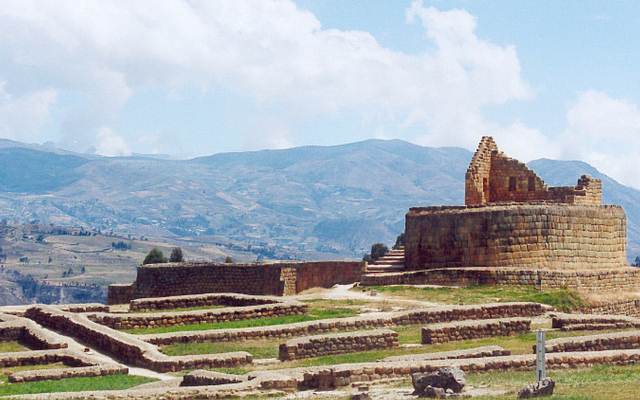 This new study goes hand-to-hand with other earlier theories that not only suggest many ancient civilizations are much older than previously thought, but advanced civilizations existed on Earth for thousands of years.

According to Andrei Tabarev, head of foreign archeology institute said in Valdivian culture, it was customary to construct platforms of 15 × 20 meters, above which rituals or residential buildings were erected.

“We spent two years working with geo-radar, scanning almost the entire territory of the Valdivia culture. Among the many discoveries, we detected an anomaly that is not of natural origin. If it turns out that this pyramid, as we are calling it, goes back to the first centuries of the Valdivia culture, we have to set the appearance of the civilization a thousand years before than what history is telling us today, “said Tabarev inj a press conference in the presidium of the Academy of Russian Studies in Moscow. (source)

In addition to the recent studies by Tabarev and his colleagues, another unusual archaeological hypothesis has been formulated in the past.

According to a study called “Ecuador: Following the Unusual Archaeological Hypothesis” written by Andrey Tabarev and his colleagues: Over half a century ago, the Ecuadorian archaeologist Emilio Estrada and his American colleagues proposed a bold hypothesis on “foreign” roots of the local ceramic technology; they based their ideas on the studies of Valdivia pottery discovered in the coastal part of Ecuador. It was supposed that the bearers of this culture had made a trans-Pacific journey from the Japanese archipelago to South America. The hypothesis split the scientific community into its violent opponents and its supporters, and has been a topic of active discussion for several decades. The authors of this paper directly participate in the archaeological research aiming to solve the riddle of the origin of pottery in the New World.

The shard of a jar found in Coastal Ecuador in 1956 gave rise to the Jomon–Valdivia hypothesis and gave the name to the corresponding archaeological site, Valdivia. Simon Bolivar Cultural Center, Guayaquil, Ecuador. Radiocarbon of the shells from the layer with pottery showed that the discovered artifact was a shard of the most ancient pottery not only in Ecuador, but also throughout South America 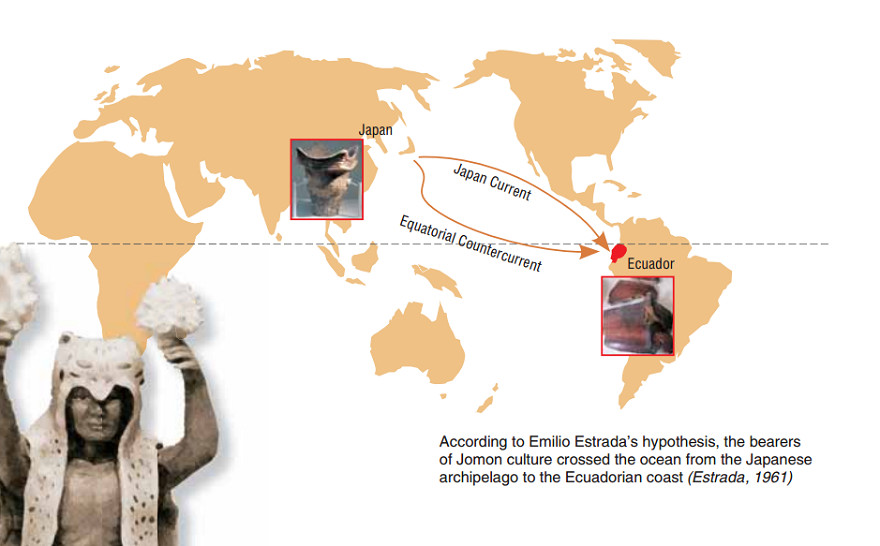 According to Emilio Estrada’s hypothesis, the bearers of Jomon culture crossed the ocean from the Japanese archipelago to the Ecuadorian coast

According to these studies, not only does it mean that some ancient civilizations in the Americas are far older than what mainstream scientists believe, but ancient peoples around the world had contact with each other thousands of years before history tells us. It is very likely that both cultural and economic exchange occurred on our planet among ancient civilizations much sooner than previously believed by scholars. The numerous similarities found across ancient civilizations is one of the best indicators of that theory.