Scientists to use robots to look inside the hidden, never-before-seen...

Are we on the edge of one of the most important archaeological finds of the century?

Many researchers are convinced we are about to make an unprecedented discovery inside the Pyramid, one that may shed light on the real reason the great Pyramids was built in the first place.

Using muon detectors and thermal scanning, the ScanPyramid project reported the discovery of two previously unknown cavities within the Great Pyramid in November of 2017.

The largest cavity is at least 30 meters long and is located on the giant corridor (Grand Gallery) that extends to the king’s chamber. The smaller cavity, on the other hand, is located behind the north face of the pyramid and consists of a corridor whose length is uncertain.

Now, researchers plan to carry out more tests with muon detectors and are developing robots, miniature robots, that will have the ability to look inside the cavities by means of high-resolution cameras.

Currently little or nothing is known about the cavities inside the monument.

“There is a big difference in whether the shape of the major cavity is horizontal or has an inclination,” said Mehdi Tayoubi, president, and co-founder of the Institute for the Preservation and Innovation of Cultural Heritage, one of the institutions involved in the ScanPyramid project.

“If the cavity is tilted, for example, it could be a corridor similar to the Grand Gallery. But if it is horizontal, then we would be faced with the presence of one or more cameras never explored before.“

“In addition, the smallest cavity, which is presumed to be a passageway, may have been connected to a larger cavity in ancient times,” he added.

Damaging an ancient monument in the name of science

As the new tests with muon detectors begin, another team led by Jean-Baptiste Mouret, a researcher at the French National Institute for Applied Mathematics and Computer Science, will build two robots that will perform an “invasive exploration” of the alleged secret chambers.

According to Mouret, his team will make a small perforation of 3.8 centimeters in circumference to break through and insert the robots into the cavities.

“First we will make a reconnaissance, for this we will send a robot in the form of a tube with a panoramic sweeping camera and lights. The objective is to probe what is on the other side of the wall and obtain high-resolution images.” 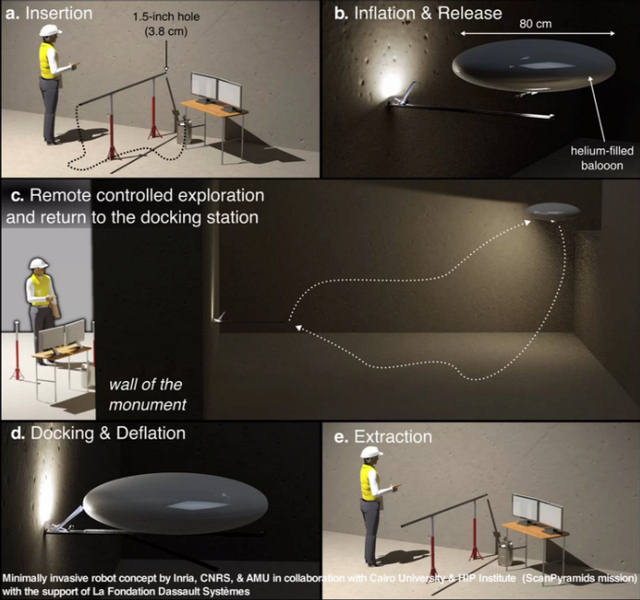 “If there is something promising on the other side, then we will extract the recognition robot and insert the explorer robot. For this last ingenuity, we are designing an inflatable airship that is compressed during insertion and inflated remotely once inside the chamber, “explains the French researcher.

“The airship will allow the robot to fly and take pictures more quickly and efficiently, without the need to move on the ground.”

Before the robots begin their work, scientists must gather more data on the dimensions and location of the chambers something that could take more than a year—in order to know where to drill the access hole.

Likewise, the Ministry of Antiquities must give final approval to begin the task that will irremediably damage a tiny fraction of the Great Pyramid.

“We are working hard on the design of the robot to generate as little damage as possible.

We hope to be able to convince the Ministry of Antiquities that this is the right technology for the next step. Meanwhile, we will use the time to test our robots in other places,” concludes Mouret.