Witnesses in China noticed –for the second time in two years— a floating city invading the sky. Apparently.

Hundreds of people noticed a ‘mirage’ which they described as a ‘floating alien city’ over the Yueyang in China, prompting millions of users to question whether the strange phenomenon could be scientifically explained.

Over a million residents call the Chinese city of Yueyang is home, and some of their hawk-eyed citizens noticed MASSIVE skyscrapers jutting out of clouds as they loomed ominously over the city.

This mass ‘floating city hysteria’ has been present in Asia for years since this isn’t the first time such a phenomenon was spotted by people.

The first floating city was documented in a footage recorded in the Chinese City of Foshan, where hundreds of people noticed the same thing: Massive buildings protruding from the clouds, hundreds of meters above their city.

Thousands of people stood still, watching the ‘ghostly city’ in what has been the second apparition of a flying city in China. The mysterious ‘city’ was reported to have giant skyscrapers and other smaller buildings which are clearly visible in the video:

Now, years after the mysterious incident in Foshan, people in southern China documented another floating city.

But, floating cities aren’t really, are they?

Experts have concluded that what people actually witnessed in the city of Yueyang was not an illusion, nor a mirage, suggesting that the phenomenon in Hunan had been caused by radiation fog. 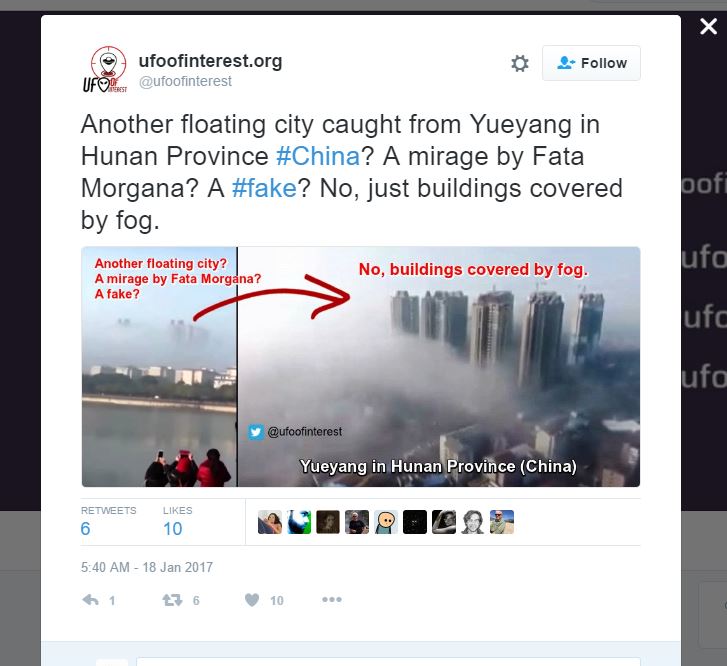 The footage filmed by tourists and residents who were by the Lake at the time shows four high-rises floating above the clouds in distance.

In the various videos made available online, people can be heard yelling excitedly in the background ‘look, it’s a mirage’ and ‘quick, let’s film this’.

Shortly after, the videos made their way to Chinese Social media platforms such as Weibo, leaving millions of people confused b the alleged floating city.

However, meteorological experts say there isn’t a mystery at all. Li Dongyang, the deputy director of Yueyang Meteorological Bureau, told Xinhua that the buildings were real, and they had been covered by radiation fog.

According to Li Dongyang radiation fog usually occurs when the ground cools, causing the moisture in the air to condense. This phenomenon usually occurs in winter time, and is aided by clear skies and calm conditions