Secret Space Program Whistleblower claims Humans are on Mars since...

A secret space program whistleblower claims Humans have been traveling to Mars for decades. Interestingly, many former NASA employees and military officials have come forward speaking about the existence of a Secretive Space Program and technology that goes far beyond what society knows.

“There exists a shadowy government with its own Air Force, its own Navy, its own fundraising mechanism, and the ability to pursue its own ideas of the national interest, free from all checks and balances, and free from the law itself.” Senator Daniel K. Inouye

Mars is the number one place in the solar system where we really want to go. Recently, during the 67th annual International Astronautical Congress ni Guadalajara Mexico, Elon Musk, the head of Tesla Motors and SpaceX announced that not only are humans going to travel to Mars in the near future, but we are going to establish a colony on the surface of the red planet where people will live.

However, all of this isn’t new according to ‘Secret Space Program whistleblower Corey Goode who released a statement detailing human activity on Mars, saying that mankind ahs been on the surface of the red planet for a long, long time.

Strangely, he isn’t the first or only one to have said that.

Many people have stated that these ‘accusations’ aren’t new, and there are documents (WikiLeaks) which argue that human and alien collaborations have been around for quite some time.

In the statement, Corey Goode wrote:

“Mars was first visited by the Germans as far back as the 1930s, but during the 70s, US space programs were actively exploring Mars and other planets to establish bases. In 1980 the US SSP became – Solar Warden. Under Project Solar Warden vast development and colonization occurred on Mars and other planets. Goode continues, “Bases on Mars were built under the surface.”

But doesn’t that sound crazy? Well, he isn’t the only one to have said it, and if we go ahead and take a look at a statement from Senator Daniel K. Inouye, we will realize just how profound this subject really is.

“There exists a shadowy government with its own Air Force, its own Navy, its own fundraising mechanism, and the ability to pursue its own ideas of the national interest, free from all checks and balances, and free from the law itself.” (source) 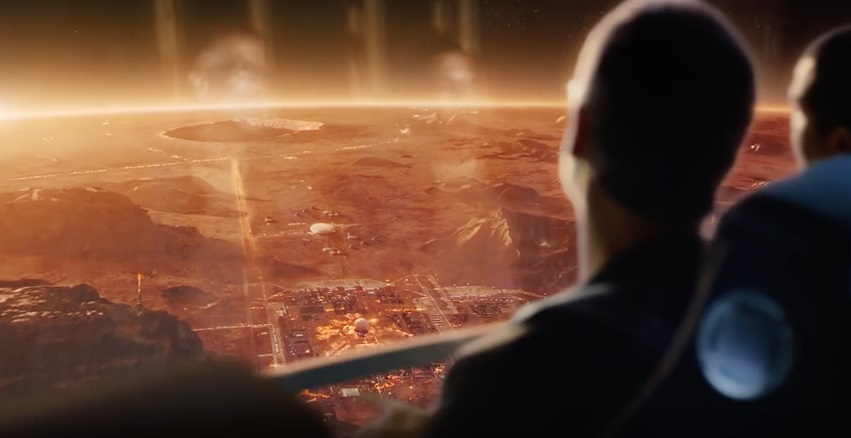 The funny thing is that according to several statements, humans have had the technology for space travel for a long time:

“During my tenure in the Navy, we discovered that the Germans had been inventing space technology since the early 20th century.” —William Tompkins.

The above statement from Tompkins corroborates comments made by Corey Goode which have been tagged as ‘ludicrous’ by many.

According to Tompkins, three are declassified documents that show German space-travel technology. He even claims to have worked within extremely classified think thanks, which created weapons for aerospace companies.

In addition to Goode, a former NASA employee claimed there were secret manned missions to Mars over 20 years ago. In an interview with Coast-to-Coast AM, a woman by the name of ‘Jackie’ talked about humans on Mars, something that has been discussed among other alleged NASA employees for years; ‘…Then I saw two men in space suits – not the bulky suits we normally used, but they looked protective. They came over the horizon walking to the Viking Explorer…’

In addition to the above, a former Marine claims to have even WORKED on Mars. The retired officer only known as Captain Kaye (pseudonym), said that not only have humans made it to Mars in the past, we have developed a secret space program and flotilla that operates in space. According to the former Marine,  he was posted on the red planet for years and his mission was to protect the five human colonies from indigenous life forms on Mars. According to Captain Kaye, not only did he spend years on Mars, but he also served aboard a giant space carrier for three years.

Reading the above statement and comparing it to what Senator Daniel K. Inouye makes you really wonder if all of the above is possible.

The recently published press release tells us more about these secretive programs and Mars:

Richardson, Texas, October 13, 2016 – On Tues, Oct. 11th President Barack Obama wrote an Opinion Editorial via CNN.com announcing to the citizens of the United States that, “America has set a clear goal to send humans to Mars by the 2030s…we do what’s possible before anyone else.” The problem here is that during a Nov. 2015 video interview with Gaia.com, whistleblower Corey Goode from the US Secret Space Program (SSP) said, “There are humans already on Mars, and it’s been colonized.” In Dec. 1986, Goode was recruited into SSP – UNSAP (Un-Acknowledged Special Access Programs) under Project Solar Warden. He was assigned to a research vessel in space to study the solar system from Dec. 1986 – Dec. 2007.

President Obama and the US government joins a heavy-hitter list of private-sector visionaries, such as Boeing CEO Dennis Muilenburg and Elon Musk (SpaceX), as they compete to make a historical dent in space. On Oct. 4th, according to Bloomberg Technology, Muilenburg said, “It’s my company that’s sending the first humans to Mars, not Musk. I’m convinced the first person to step foot on Mars will arrive there riding a Boeing rocket.”