Something Struck the Lunar Surface During the Blood Moon Eclipse...

An unprecedented event was witnessed by thousands of people around the globe during the blood moon eclipse that took place on January 21.

On January 21, millions of people around the world observed the only total lunar eclipse of 2019 and the emergence of the “blood” supermoon.

What few noticed, however, was that a mysterious object collided against Earth’s natural satellite.

Now, as more people provide evidence of the collision, scientists think this may be a first of a kind even, never before witnessed in history.

Justin Cowart, a Ph.D. candidate at Stony Brook University in New York explained to National Geographic what a unique event this was.

“It’s a rare alignment of infrequent events. An [meteoroid] about this size hits the moon about once a week or so.” But he adds that if this event is confirmed by more scientists, it would mark the first time such an impact has been recorded during a lunar eclipse.

Among the first sky gazers to witness and report the event was Jose Madiedo, an astronomer at the University of Huelva in Spain, who tweeted that a lunar impact occurred at 5:41 am Spanish Peninsular Time.

Madiedo soon posted a video and images of the event.

The stunning photograph captured and published by Madiedo evidently showed a yellowish-white dot in the darkened top left quadrant of the Moon during the totality phase of the eclipse.

“I had a feeling, this time will be the time it will happen,” Madiedo told New Scientist. “I was really, really happy.”

What Madiedo had witnessed was soon confirmed by other people who went to social networks to tell people what they had seen and documented.

One eagle-eyes Reddit user was among the first to post about the impact and reached out to the r/space community to find out if others could confirm.

But despite the fact that the impact was well-documented, many scientists took the news with a pinch of salt. 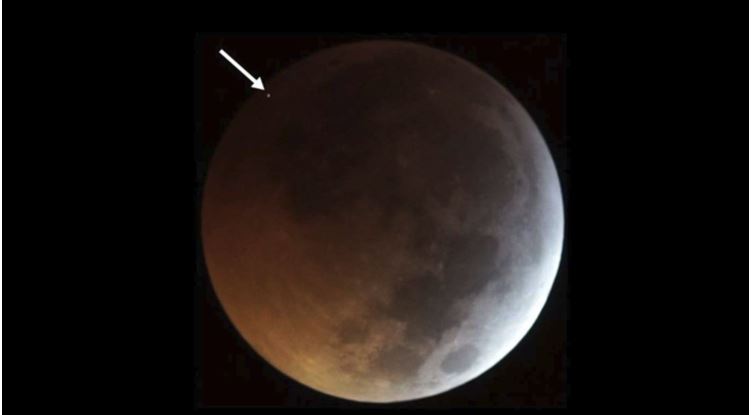 One such scientist was Sara Mazrouei of the University of Toronto.

After seeing the trending post about the impact on Twitter, she wrote: “I was wondering if it was maybe a local effect, or maybe something with the camera.”

As more evidence was brought forward, astronomers finally weighed in and considered the possibility that the impact was real.

“They all seem to see the same bright pixel,” Mazrouei eventually explained.

This points strongly toward the flash of light being an impact.

“This is something that people all around the world didn’t know that they were going to sign up for,” concluded Noah Petro, a research scientist at NASA’s Goddard Space Flight Center.