The Baghdad Battery And Ancient Aliens

The Baghdad Bettery or also known as the Parthian Battery is the name archaeologists attribute to the  number of artifacts created in Mesopotamia, during the dynasties of Parthian or Sassanid or Persian Empire period. The articles were discovered in 1936 and were brought to the attention of world wide archaeology and science in 1938 when Wilhelm König, the German director of the National Museum of Iraq, found the objects in the museum’s collections. It is unsure if the batteries were excavated by König, or that König found them in the basement of the Baghdad Museum when he took over as director since both stories are floating around the media. Most sources date the batteries to around 200 BC – in the Parthian era, circa 250 BC to AD 225.

In 1940, having returned to Berlin due to illness, he published a paper speculating that they may have been galvanic cells, perhaps used for electroplating gold onto silver objects. In the museum König also discovered copper utensils from ancient Sumer, which were electroplated with silver.

The artifacts consist of terracotta jars approximately 130 mm (5 in) tall (with a one and a half inch mouth) containing a copper cylinder made of a rolled-up copper sheet, which houses a single iron rod. At the top, the iron rod is isolated from the copper by bitumen plugs or stoppers, and both rod and cylinder fit snugly inside the opening of the jar, which bulges outward towards the middle. 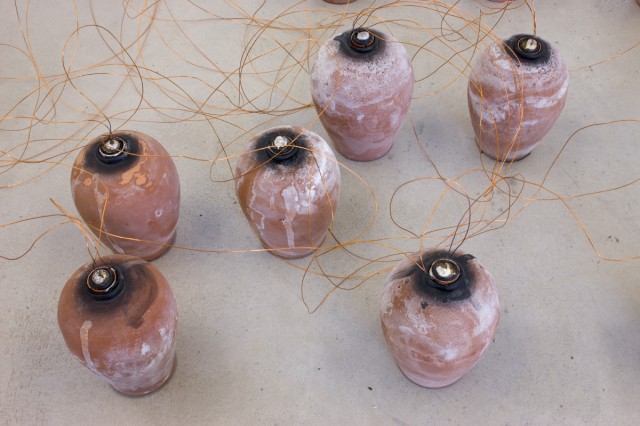 Now if these artifacts are really batteries the would predate  Alessandro Volta’s 1800 invention of the electrochemical cell by more than a millennium. Crazy right? Where did Ancient mankind obtain this knowledge from? What could have these ancient batteries have powered? Experiments with models of the Baghdad Battery have generated between 3 and 5 volts. It is not a lot of “juice” when you look at it but then again, it was enough to power “something” small, thousands of years ago. These Batteries are unique, they are a discovery that is one of a kind. It is something that tells us that ancient mankind had technology and that they were not as primitive as we thought.

“They are a one-off. As far as we know, nobody else has found anything like these. They are odd things; they are one of life’s enigmas.”- Dr. Paul Craddock 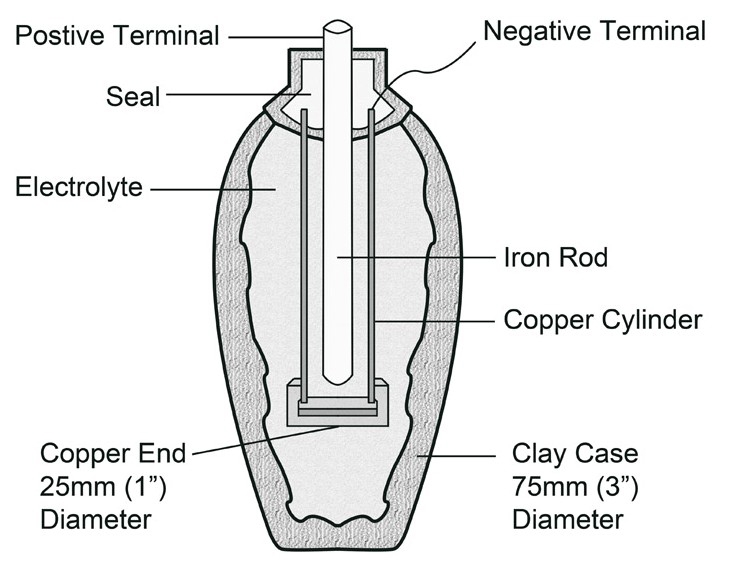 Copper and iron form an electrochemical couple, so that, in the presence of any electrolyte, an electric potential (voltage) will be produced. This is not a very efficient battery as gas is evolved at an electrode, the bubbles forming a partial insulation of the electrode so that although several volts can be produced in theory by connecting them in series.

It is possible that Ancient mankind used these batteries to power devices, it is also possible that they figured out a way to connect them and generate more power to feed several devices that could have been used in construction and transportation. This would help explain a small percentage of achievements by ancient mankind. It just sounds more logical when you think of it.

Today we are not sure what ancient mankind used these “batteries” for. Several theories are still in the air and no conclusion has been provided. While these batteries could have been used just for electroplating gold and silver, they could have been used for much more important things as well such as transportation and construction. We also know that connected in series, a set of  Baghdad batteries could theoretically produce a much higher voltage, though no wires have ever been found that would prove this had been the case. 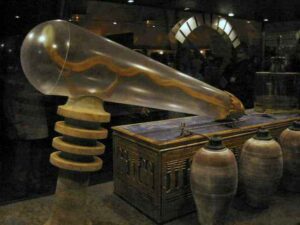 Is it possible that these batteries were used to power devices such as the “Dendera bulb”?According to Ancient Alien Theorists the answer is yes.

The range of possibilities is huge for what these batteries could have been used for. The possibilities are endless and would certainly help us understand how mankind lived and worked thousands of years ago and perhaps how they constructed the Pyramids and other incredible structures.

The only question that is perhaps more puzzling then the use of the batteries is who or what gave this ancient technology to mankind? Was it simply a random discovery? Or is there something otherworldly to these batteries? How could ancient Persian science have grasped the principles of electricity and arrived at this knowledge?

To what purpose would ancient mankind have used these batteries for, did they have access to power sources and electricity thousands of years before history tells us? Is it possible that this technology was obtained from extraterrestrial visitors like the Ancient Aliens theory suggests? When connected could these batteries power ancient devices such as the Dendera Bulb? All of these questions are still unanswered, and the Baghdad Batteries remain as one of the most mysterious discoveries that still remain unexplained.