The Enigmatic Nazca Lines—A Message To The Star People?

It was in 1927 when Airlines started operating over Peru when passengers described strange lines, figures, and shapes on the ground. Almost invisible from the ground, massive figures were etched into the desert of Nazca, almost as if they were welcoming those who observe from above.

Airplanes filled with tourists from all over the world quickly conquered the Nazca skies, and over 100 different designs were discovered in the region. These strange geoglyphs depict animals, interesting geometrical designs, and even humanoid figures.

However, what is perhaps one of the most exciting things about Nazca is that these drawings are scattered over two hundred square miles.

These figures are massive, and you can only appreciate them from the sky. If you stand on the ground the drawings cannot be seen, you wouldn’t be able to make out anything, so what was the purpose of these drawings? There are over 150 geometrical shapes at Nazca, and you can only see what they are if you are flying.

The most massive figure found at Nazca is approx. 1000 feet and the longest one goes for 9 miles. Why Nazca? How were they built? To what purpose?

According to archaeologists, these mysterious drawings are believed to have been created by the Nazca people; which flourished in the region between the 1st and 8th century A.D.

The lines were formed by the careful removal of the reddish iron-oxide pebbles that make up the desert surface. Once exposed, the underlying dirt, which contains high amounts of lime, hardened and resistant to erosion.

The reason these lines survived so long is that of the weather conditions in the region, there is little rain and wind is almost nonexistent so if you go to Nazca today, and draw something on the ground it will remain there for quite some time.

The question we need to ask today is if the ancient Nazca people created these drawings,  to what purpose did they do it. You can truly appreciate the greatness of these figures from the sky, but at the time they created them, airplanes didn’t exist, so for who did they design this? They would have needed something or someone to guide them because these lines are precise, they are very accurate, and it’s hard to believe that the Nazca could achieve such accuracy in their drawings without having a way to observe what they were doing, they needed to be guided somehow.

You cannot just go ahead and draw a figure that is over 1000 feet large or over five miles long without making mistakes.

To draw something at Nazca isn’t the problem, you can draw anything on the ground and well… that’s about it; you remove the top layer and whatever you decide to draw will stay there, the question is how did they make these huge designs so accurately.

Could have extraterrestrials been the reason for the Nazca lines? The answer is YES because in that period in mankind’s history the only ones that could have had the ability to fly were extraterrestrial beings.

Some of the parts of Nazca have amazing designs highly accurate triangles that are a mystery. Some of the triangles look like they were made by something that pressed the ground down at least 30 inches with incredible force, now could the ancient Nazca have done this? With their feet? How would you press down a six-mile “perfect” triangle into the desert?

What is the purpose of these lines? Could they have been used as “navigational” markers for visitors from outer space? Where they created by the natives to commemorate the gods that visited them thousands of years ago?

According to legend, the mysterious Incan creator god Viracocha commissioned the Nazca Lines and glyphs in the past.

Some myths maintain that the Nazca lines are said to be created by Viracocha himself.

Viracocha was the great teacher God of the Andes, similar to Quetzalcoatl or Kukulkan.

Viracocha was one of the most important deities in the Inca pantheon and was seen as the creator of all things, or the substance from which all things are created, and intimately associated with the sea.

Erich von Daniken’s controversial theories concerning the Nazca Lines have ignited hundreds of people to travel to Nazca and study the culture, the life, and history of the Nazca people.

There are some scholars that have found curious patterns in the numerous designs, and they infer that the Nazca may be one of the earliest known examples of applied geometry.

One of the most intriguing designs of Nazca, without a doubt,  is the one which represents a Spider.

The Spider has one leg extended way out. Curiously, if you take that geoglyph and if you were to flip and turn it, so it displays the mirror effect, what you would observe is that the Nazca spider is representing the Constellation of Orion, and the long spiders leg is representing the brightest star in the sky, Sirius which is also one of Earth’s nearest neighbors.

What you have here is a depiction of a spider, which can only be seen from the sky, and that represents stars and constellations.

Whoever designed these intricate geoglyphs at Nazca had an excellent knowledge of Astronomy and geometry, and like many other ancient cultures around the world, the Nazca also knew that Orion and Sirius were important, almost as if the geoglyphs was their way of paying respect to the stars. 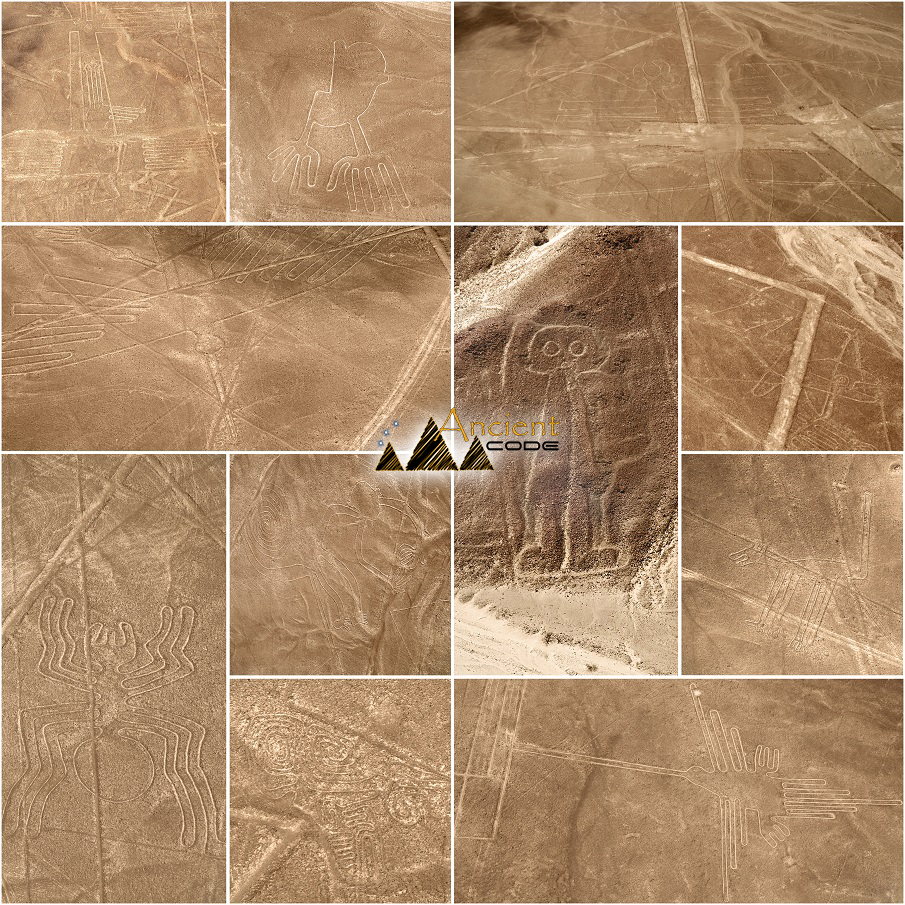 Lines and Geoglyphs of Nazca, Peru – collage (From top left: seabird, hand, pelican, condor, giant, whale, spider, monkey, dog, scorpion, hummingbird)Eight feet beneath some of the lines there are magnetic field anomalies. There is something at Nazca that makes it unique, different from any other place on Earth but we simply do not know what it is.

What makes Nazca so special? Well, Nazca has everything. It is a mineral-rich environment. Nitrates and various things that we use in our modern propulsion are found in abundance. The Nazca were located in a nitrate-rich environment, but as far as research has shown, they did not need it.

The question might be, whether nitrate was of special importance to “otherworldly” visitors that could have visited Nazca in the past. In today’s technology, nitrate is used in a lot of interesting things; technology is perhaps number one as even today we have certain interest in nitrate because it is used in space travel.

Nazca holds infinite mysteries, but at the same time answers, the question is will we ever truly understand this gigantic display of creativity and geometry? One thing is certain, this area of Peru will continue to be an area of huge interest to archaeologists, scientists, and historians.