What’s Up With The Hollow Earth Theory?

One of the most interesting question many people have asked for centuries is whether there is a possibility that our planet is hollow? For many years it was believed that the earth was hollow, but even though many have come up with theories, until 1968 there was no proof. That year, pictures taken by a satellite orbiting Earth clearly showed a gaping hole located at the North Pole; enough evidence to support the hollow Earth theory according to many.

In the early 1970’s, ESSA, a project belonging to the Department of Commerce of the United States, gave media access to images of the North Pole taken by the ESSA-7 satellite on November 23, 1968. One of the photographs showed the North Pole covered by the usual cloud; the other one showed the same area without clouds, revealing a huge hole where the pole was supposed to be located. Little did ESSA’s team know that these images would awake the interest of researchers around the globe who had already suspected of anomalies at the north Pole, anomalies that would fuel the research of unidentified flying objects that according to many, were deeply connected to the North Pole and the hollow Earth theory.

For a long time, ufologist Ray Palmer and others believed that the Earth was in fact hollow and that UFOs came and returned to a civilization of superior beings hidden in its unexplored interior. In 1970, with support from the images that proved the existence of the hole at the North Pole, Palmer was finally able to conclude that the underground civilization existed and that it could probably be reached through the holes in the North and South poles. 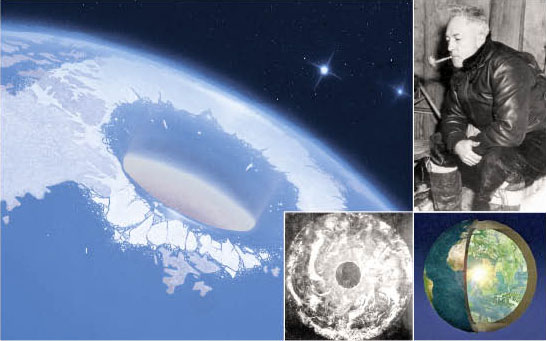 Vice Admiral Richard E. Byrd of the US Navy was a distinguished pioneer aviator and polar explorer who flew over the North Pole on May 9, 1926 and led numerous expeditions to Antarctica, including a flight over the South Pole on 29 November 1929. Between 1946 and 1947, he and his team carried out a large-scale operation called “High Jump”, during which he discovered and mapped 1,390,000 km² of the Antarctic territory.

The famous Byrd expeditions first entered in dispute of the hollow Earth theroies when several articles and books like Worlds beyond the Poles by Amadeo Giannini claimed that Byrd had not flown over the Pole but inwardly through large holes leading into the Earth. Ray Palmer, mainly based on the book by Giannini, introduced his theory in the December 1959 issue of its magazine and obtained very positive results form the audience because of his theories and ideas regarding the Hollow Earth theory.

According to Giannini and Palmer, Vice Admiral Byrd announced on February of 1947, just before venturing into a  2,750 km journey across the North Pole, “I like to see the land beyond the Pole. That area beyond the Pole is the center of the Great Enigma.”

According to Giannini and Palmer during Vice Admiral Byrd’s alleged flight over the North Pole in 1947, Admiral Byrd radioed that he saw beneath him, not snow, but areas of land with mountains, forests, vegetation, lakes and rivers and in the undergrowth, a strange animal that looked like a mammoth. Also in January of 1956, after leading an expedition to Antarctica, Admiral Byrd had stated that his expedition had explored 3,700 km beyond the South Pole and also just before his death, Byrd had said there existed a land beyond the Pole that was “an enchanted continent in the sky, a permanent mystery of Earth.” That land, according to other theories, was the legendary Rainbow City, home to a fabulous lost civilization.

To Giannini and Palmer, these stories from Admiral Byrd did nothing but confirm what they had always suspected: that the Earth has “strange” Poles, and that the Earth was essentially like a donut, where at the center, these is an access going many kilometers  into the earth, forming a giant hole passing through the axis of the earth, from one pole to another.

Due to geographical reasons, it is impossible to fly 2,750 miles beyond the North Pole or 3,700 miles beyond the South Pole without seeing water, according to Palmer, Admiral Byrd must have flown into the huge convex cavities of the poles. Researchers also believe that, had he ahead, it would have taken him to the secret base of UFO’s that belongs to the hidden civilization inside our planet

The possibility that the earth is hollow, and that it can be accessed  through the North and South poles, and that secret civilizations flourish within it, has spurred the imagination of people through centuries. Evidence of this we find in the history of countless ancient civilizations. The Babylonian hero Gilgamesh visited his ancestor Utnapishtim in the bowels of the earth; in Greek mythology, Orpheus tries to rescue Eurydice from the underground hell; it was said that the Pharaohs of Egypt communicated with the underworld, which could be accessed via secret tunnels hidden in the pyramids; and Buddhists believed (and still believe) that millions of people live in Agharta, an underground paradise ruled by the king of the world. So just when you think that these theories could be nothing more than excessive imaginations, you actually come across evidence in ancient history pointing towards the possibility of a world inside Earth.

Before the advancements in technology of the twentieth century man could only guess what planet Earth actually looked like. Today, the Earth has been photographed from space and analyzed with high-tech equipment, allowing researchers and scientists to get to know ur planet in a much more complex way.

Leonard Euler, a mathematical genius of the eighteenth century, concluded that the Earth was hollow, containing a central sun and was inhabited; and Dr. Edmund Halley, discoverer of Comet Halley and Royal Astronomer of England also believed that the Earth was hollow on the inside with three “Floors”. Regrettably none of these theories were supported scientifically, on the other hand these theories were present in several works of fiction on the same subject, the most important of which were The Adventures of Arthur Gordon Pym by Edgar Allan Poe (1833), in which the hero and his companion have a terrifying encounter with beings from within the Earth; and Journey to the Center of the Earth by Jules Verne (1864), where an adventurous teacher, his nephew and a guide manage to enter into the interior of the Earth through an extinct volcano finding new skies, gigantic seas seas and gigantic prehistoric reptiles that populate the forests Earth’s interior.

The belief in a hollow Earth was so widespread that even Edgar Rice Burroughs, the celebrated author of Tarzan, felt compelled to write Tarzan in the bowels of the Earth (1929). Thanks to these and other science fiction titles, interest in the hollow earth theories has is still alive and has kept the interest flames burning in the possibility that the Earth is or once was hollow and that it hides countless mysteries.

The possibility of the Hollow Earth theory has also been present every time when we see one of those strange UFO videos where unidentified objects enter volcanoes, like the Popocatepetl.

So are the UFO sightings really related to extraterrestrial beings visiting our planet? Or is there a possibility that these strange sightings are actually connected to beings living inside the Earth, like the Hollow Earth Theory. All of these theories fueled researchers to search for “lost” civilizations like Atlantis.

So what’s to the Hollow Earth theory?

It is possible that “the land beyond the Pole” and “Great Enigma” refried to by Byrd are actually reference to unexplored regions of Earth rather than inside the Earth itself. The “enchanted continent in the sky” could have been only a description of a common phenomenon in Antarctic latitudes: a kind of mirage that brings the reflection of distant lands. All of the wild goose chases can be attributed to misinterpretation of words actually.

According to the diary of Byrd, “We have flown a total of about 25,900 km² beyond the Pole. As expected, although  disappointing to say, we have not observed any significant feature beyond the Pole. Only the immense white desert that covered the horizon. As for the legendary Rainbow city it might have been just the description referring to the geological features: The planet is composed of crust, mantle and core; no hollow areas than in the imagination

However, could it be that the hollow Earth theory is correct? Well its something that cannot be disproved. there are countless stories that can lead you to believe that there is something inside the Earth beyond a core, we have seen it in ancient mythology of countless stories that lead toward the interior of the planet. Some believe that there is nothing to find and that the theories regarding civilizations living deep under the surface of the Earth are spikes of imagination.

Given the fact that the physical properties and structure of the interior of the Earth can be measured today “exactly” with seismographs and electronic measurements researchers can conclude that far from being hollow, the Earth is composed of four main layers: the crust, mantle, core and the nucleolus. The crust of granite and basalt rock has a thickness of 30-40 km. Under the crust researchers believe the mantle is found, which extends down to around 2,900 km. It is a solid formation that consists of silicates of magnesium, iron, calcium and aluminum. Below that we find the core, believed to be primarily composed of melted iron. Finally, at a depth of about 5,090 km is the nucleolus, which may be solid as a result of freezing iron under extraordinary pressure. Although many details are only hypotheses waiting to be reviewed as sciences progress allowing all of the theories to be confirmed.

As for the huge hole that can be seen in the photograph of the Arctic, Well the explanation is ridiculously simple:

The picture is a mosaic of images taken by the satellite for 24 hours, showing the Earth from different angles. The images were processed by a computer to form a complete view of the Earth as if the observer was located in a point directly above the Pole. During those 24 hours, some of the points in equatorial latitudes received sunlight for some time, and look bright in the composite photograph. But the regions near the Pole were in darkness, therefore there is an unlit area in the center of the photo. So apparently there are no holes at the poles and the Earth isn’t hollow as some believed it to be for centuries.