There’s A Mirror Image Of An Antimatter Universe On The... 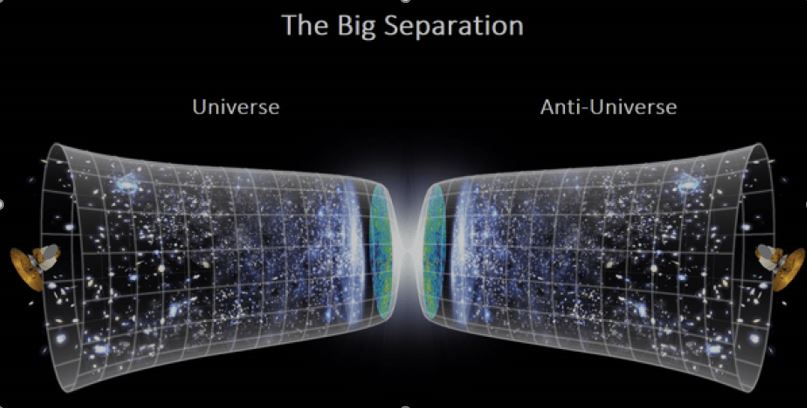 A recent scientific study has proposed that the universe we live in could be a mirror image of an antimatter universe that extends backward in time, existing before the Big Bang.

This is according to scientists from the Perimeter Institute for Theoretical Physics of Canada, who have come up with a new cosmological model that suggests the existence of a so-called “anti-universe” that, together with ours, retains a fundamental rule of physics called CPT symmetry.

However, while its existence does make sense, researchers still need to resolve countless details in their theory, but they say it naturally explains the existence of dark matter.

The model explains a lot about dark matter, the ‘still’ hypothetical form of matter that is believed to account for as much as 85% of the matter in our universe, and around a quarter of its total energy density.

Most dark matter is theorized as being non-baryonic in nature, possibly made out of yet-undiscovered subatomic particles.

But the new study (CPT-Symmetric Universe) published in the journal Physical Review Letters may hold an answer to Dark Matter.

Standard cosmological models suggest that our universe, as well as space, time and mass/energy – came (exploded)  into existence more than 14 billion years ago. Since then, they have been expanding and cooling down, a chain reaction that has led to the progressive creation of subatomic particles, atoms, stars, and planets.

But scientists from the Perimeter Institute for Theoretical Physics of Canada have a different theory.

They’ve set out to develop a model of the universe that can explain all observable phenomena based only on the known particles and fields.

To do so, they’ve asked themselves whether there is a natural way to extend the universe beyond the Big Bang, a singularity where general relativity breaks down and exits on the other side.

“We found that there was,” he says.

The answer was to assume that the universe we inhabit obeys CPT symmetry as a whole.

This fundamental principle requires that any physical process remains the same if time is reversed, space is reversed and particles are replaced by antiparticles.

Turok explains that this isn’t something we observe in the universe we live in, where we believe that time progresses as space expands and that there is more matter than antimatter.

Scientists explain that instead, what respects the symmetry is the existence of a universe-antiuniverse pair.

The so-called antiuniverse would stretch back in time from the  Big Bang, getting bigger as it does so, and would be dominated by antimatter, as well as inverted spatial properties compared to our cosmos.

The study published in the Journal Physical Review of Letters, suggests that inside the Antiuniverse, and before the big bang, time ran backward and the cosmos was filled with antimatter instead of matter.

The compelling theory tells us that the universe is actually replete with ‘very massive sterile neutrinos’ which in turn could help us explain the existence of dark matter, the strange ‘substance’ that is believed to make up much of the universe.