The rock—which belongs to the Permian Period 299 to 251 million years ago—was discovered in New Mexico and features a human footprint, left behind—apparently—nearly 299 million years ago. But, there weren’t any humans on Earth at that time, were there? 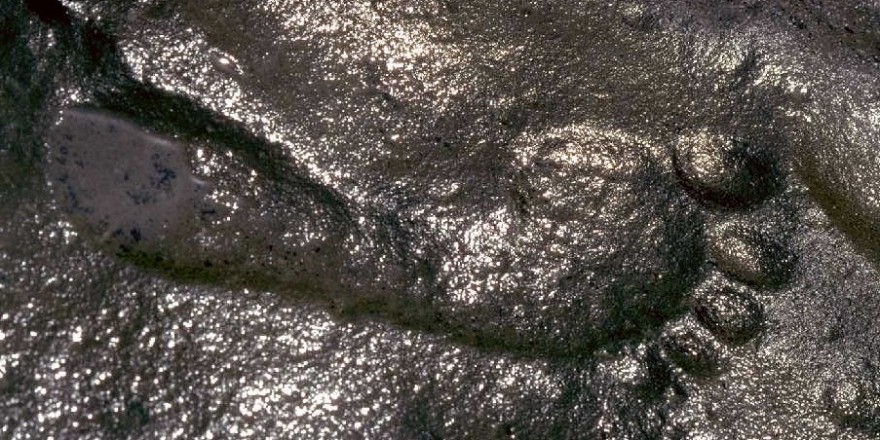 Many authors would agree with the fact that countless discoveries that have been made in the last couple decades on Earth suggest history as we have been taught is anything but complete.

Imagine if society finally accepted the fact that our planet has been inhabited by countless ancient civilizations in the past, and that life on Earth—advanced life—has existed for millions of years?

Today, this is only a theory—a wild guess—which seems to be backed up by several ‘controversial’ discoveries.

One of them is the so-called ‘Zapata Print’ or ‘Zapata track’, discovered in New Mexico.

The enigmatic footprint has been researched by Dr. Don Patton who claims that the Permian rock from New Mexico contains a genuine human footprint.

According to Genesispark.com, Dr. Don Patton attempted to cut this print out of the rock, but wore out four carborundum blades trying to make one cut! Patton reports having personally seen a photograph of four, virtually identical tracks in an obvious right left pattern taken about one-quarter mile from the Zapata track.

The controversial part of course, is the AGE of the rock where the footprint was left—The Permian Period which lasted from 299 to 251 million years ago, at a time way before birds, dinosaurs, and MAN, was supposed to exist.

Anyway, returning to the curious footprint, there are many who favor it and there are others who believe it is not real—because it displays several ‘unnatural features’.

As noted by author Glen J. Kuban, the controversial footprint shows some features not typical of genuine human prints.

The line and position of the toes are somewhat unnatural, and the ball is narrower and round compare to most genuine prints. A few individuals have emphasized that the print shows some mud up-push (a rim of raised relief around the print).

Supposedly this confirms its authenticity.

“The fossil tracks that MacDonald has collected include a number of what paleontologists like to call ‘problematica.’ On one trackway, for example, a three-toed creature apparently took a few steps, then disappeared–as though it took off and flew. ‘We don’t know of any three-toed animals in the Permian,’ MacDonald pointed out. ‘And there aren’t supposed to be any birds.’ He’s got several tracks where creatures appear to be walking on their hind legs, others that look almost simian. On one pair of siltstone tablets, I notice some unusually large, deep and scary-looking footprints, each with five arched toe marks, like nails. I comment that they look just like bear tracks. ‘Yeah,’ MacDonald says reluctantly, ‘they sure do.’ Mammals evolved long after the Permian period, scientists agree, yet these tracks are clearly Permian.” (“Petrified Footprints: A Puzzling Parade of Permian Beasts,” The Smithsonian, Vol. 23, July 1992, p.70.) (Source)

In the book “Fossil Facts and Fantasies” by Joe Taylor, the footprint” appears to be a female, barefoot print.” Taylor states that it was found in 1929, and that “it is said that at that time, one half of a second track was visible at the edge of the ledge bearing both tracks. The edge of this ledge has since fallen off.” Taylor does not say where he learned these details, and does not cite any literature, scientific or popular, regarding it.

Author Jeff A. Benner stated that “the Creationist community agree that the print is human in origin and proof that humans existed during the time of the dinosaur.”