A Brief History Of Witchcraft And How It Spread Across...

Modern witchcraft has drawn much of its ideology from ancient religions and esoteric schools. It can be argued that the roots of this revived faith go back as far as the Stone Age, when humans began to conceive their world as a spiritual construct. 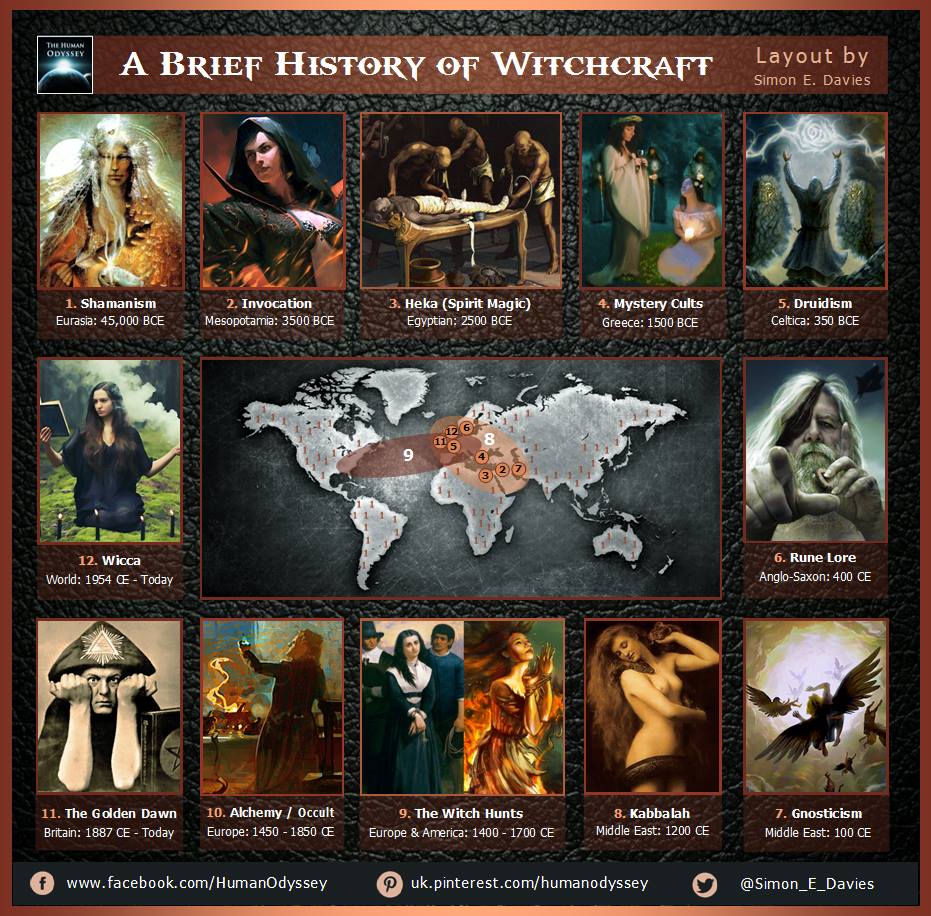 1. Shamanism appeared some time during the upper Paleolithic (50,000 – 10,000 years ago). The shaman would often enter trance states to follow the migration of herds (ensuring a successful hunt), heal people from illness, and protect their tribe from evil spirits. Many cave paintings depict shaman dancing in animal costumes, as though taking on the spirit of a particular animal.

2. As the nomadic tribes began to settle, new civilisations emerged, the earliest known being Sumeria (3500 BCE). From the translation of cuneiform tablets we know that the Sumerians believed in a wide range of celestial beings such as gods and spirits, many of which were hostile, so each person was guarded by spirit to protect them from demons. Their magic system was known as invocation, which allowed them to summon, bind and vanquish dark spirits using amulets, incantations and exorcism.

3. In ancient Egypt (2500 BCE), priests became skilled in Heka (the ‘activation of Ka’ or spirit energy). The Ka was the aspect of the soul which embodied personality, and the priests believed they could manipulate this spiritual fabric to influence the gods, gain protection, heal the ill and transform themselves into immortals. During the Third Intermediate Period of Egypt (1069–653 BC), the art of Heka was adopted by midwives and nurses, allowing women to explore the secrets of Ka for the first time.

4. The Mystery cults emerged in ancient Greece (1500 – 1100 BCE) and were eventually passed onto the Romans. These secret schools required an initiation process to gain entrance. Worshippers believed that the gods of Greece (such as Demeter, Dionysus and Orpheus) had passed on their magical secrets to humans during the Bronze Age. This included the art of shamanic travel, invoking the gods, reincarnation, and even the ingredients for making ambrosia (an immortalising food).

5. The Celts (decedents of the Indo Europeans), formed a priest class known as Druids by around 350 BCE. These nature worshippers acted as teachers, judges, astrologers, healers, and bards. They were pantheists, meaning they revered many aspects of a single deity (in the forms of nature gods, trees and standing stones). All of their rituals were based around reincarnation, creating potions and crafting spells, which would eventually form the backbone of medieval witchcraft.

6. Another branch of Indo-European magic can be found in the Anglo-Saxon culture (400 CE – 1100 CE). Their magic was based on Norse Mythology, where legend says the god Odin had passed the secrets of the runes to humanity. These sacred symbols are used for healing, creating charms, crafting magical artefacts and hexing people. Due to the Christianisation of their religion in the 6th – 8th century, the Anglo-Saxons came to fear the practitioners of rune magic, believing them to be guided by evil.

7. Gnosticism was a mystic religion that originated in the Middle East around 100 CE. Gnostics believed the material world was inherently evil and that realm of spirit was fundamentally good. They claimed the creator god of the Old Testament was corrupt and had created a flawed world. Instead they directed Christians toward an inner experience of the true god via spiritual transcendence. Their ideology outraged other Christian and Jewish faiths that saw this as an affront to their religion.

8. Gnosticism later influenced the mystic tradition of the Kabbalah. This Jewish sect believed that God’s divine knowledge had been shared by the angels to humans 5000 years ago. His spiritual principles were then passed down the generations via oral tradition until emerging as a sacred text known as Sefer Zohar (“Book of Radiance”), written by Moses de Leon, 1290 CE. Practitioners guide their followers via meditation toward a direct contact with the divine. Like Gnosticism, the Kabbalah speaks of divine beings, a tree of life and multiple cosmic realms.

9. Throughout the early middle ages, the Catholic Church tolerated pagan faiths. However, after the devastation of the ‘Black Death’ (bubonic plague 1347-1349), a paranoia swept through the minds of Christians, believing it was the heathens and heretics who had tainted humanity with their dark sorcery. What followed was 300 years of persecution toward anyone practicing magic and mysticism.

1401: Witch Trials began in England, proclaiming that anyone who practiced witchcraft was to be burnt at the stake.

1487: The notorious ‘Malleus Maleficarum’ (‘Hammer against the Witches’) was published by Kramer & Sprenger, inciting Christians to hunt down and kill witches.

1515: Authorities in Geneva, Switzerland burn 500 accused witches at the stake

1526: Como, Italy, a spiral of witchcraft charges lead to around 1000 executions.

1692: The Salem witch trials arrest 150 people, convicting twenty-nine of the felony of witchcraft. Nineteen of the accused were hanged.

Between 1400 and 1700, an estimated 50,000 suspected witches were executed (around 75% of them women), in countries such as France, Britain, Germany and America.

After what became known as “The Burning Times”, the practice of witchcraft survived in pockets, particularly in the countryside, cut off from interaction with witches from other areas, or through secret societies.

10. The occult, (knowledge of the paranormal) was studied and practiced throughout the witch trials, often within secret societies sworn to silence. Intellectuals drawn to forbidden lore and mysticism began to study ancient texts related to invocation, ancient mythology, Egyptian mysticism, Gnosticism and the Kabbalah. Throughout this era, societies such as the Freemasons and Rosicrucian’s began to develop new schools of thought in astrology, alchemy, tarot, mediumship and sacred geometry.

11. In 1887, the works of the occult reached their pinnacle in an English society called ‘The Golden Dawn’. The Hermetic Order was an organisation devoted to occult practices, metaphysics, and paranormal activity. Many present-day concepts of ritual magic have been inspired by the Golden Dawn, which became one of the largest single influences on 20th-century Western occultism.

12. Wicca is a modern pagan, witchcraft religion. It was developed in England during the first half of the 20th century by Gerald Gardner. It draws upon the mystic traditions of the golden Dawn as well as ancient pagan practices. Wiccans typically believe in reincarnation, the use of magic to influence specific outcomes, a moral responsibility toward others and an appreciation for natural cycles (they have eight festivals known as Sabbats that revolve around the changing seasons). Wiccans often worship a variety of nature deities, the most important being the mother goddess and the horned god. These two deities are sometimes viewed as facets of a single godhead.