The lost pyramid of Egypt: Confirmed, a 4th Pyramid discovered...

Djedefre was the pharaoh who ruled over Egypt around 2556 BC, and during his reign, almost five millennia ago, he built the tallest and most incredible pyramid, even greater than the ones which were constructed on the shores of the River Nile.

An international team of archaeologists has discovered that the ruins that can be seen today in Abu Rawash, a few kilometers from Cairo, correspond to the so-called lost pyramid, whose megalithic stones have uncovered many of the legends that have surrounded the reign of Cheops.

Djedefre was the son and immediate throne successor of Khufu, the builder of the Great Pyramid of Giza; his mother remains a mystery for archaeologists and historians.

This is the lost forth Pyramid and it was one of the wonders of ancient Egypt, its magnificence made the three pyramids of the Giza plateau look like toys. This “lost” pyramid was the highest of all the Giza complex [Khufu, Khafre and Menkaure] and its stone was of much better quality as well. For years it was thought that these remains were just those of an unfinished construction. According to Zahi Hawass: “we found that it was not the case as its stones were used for numerous constructions in Cairo. 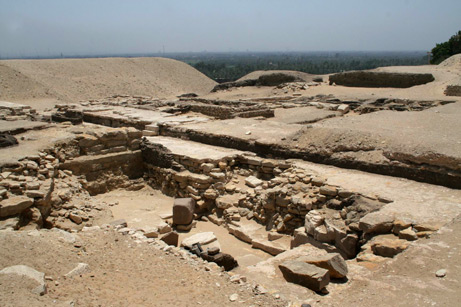 “During the past 12 years we have dug at the site, we have brought to light much of the history of the Fourth Dynasty of ancient Egypt, showing struggles for power and unraveling the mystery of the construction of the pyramids,” he added.

The remains of the pyramid of Djedefre today rise barely over 10 meters above the ground. The remains of this, once great Pyramid are located on a hill-top in Abu Rawash, a militarized and restricted area, located around the parched desert, that in the background displays an impressive black cloud of the polluted air of Cairo. A view that was very different thousands of years ago when Djedefre’s pyramid stood tall against the desert. You can easily make out the three majestic pyramids of the Giza plateau from where the “greater” pyramid of Djedefre once stood. Archaeologists believe that even though this ancient Pyramid was relatively close to the other three pyramids, they never shared a connection.

Hawass believes the son of Cheops chose this place, at some distance from Giza, because he wanted an independent resting place which he marked by the placement of his majestic pyramid, but also because the site were the pyramid was enacted, would place his construction much closer to the sun and the sun God.

According to the latest research, archaeologists believe that Djedefre’s pyramid was at least 7.62 meters higher than that of Cheops, which has 146 meters and each of the faces of the pyramid, at its base, measured 122 meters while having a tilt angle of 64 degrees. The pyramid was built with limestone and red granite that originated from Aswan, 800 miles away on the Nile. Using a hard dolerite stone, the blocks of stone were precisely shaped using a saw made out of copper and quartz. Each of the pieces used for the construction of the majestic pyramid could weigh up to 25 tons and archaeologists believe that up to 370 people were needed to move it.

An opening on the surface, marks what was the passage down to the underground chamber, now exposed to the outdoors, it helped verify that mortar was used in the first phase of construction to consolidate the inside of the chamber where the Pharaoh would rest in his journey to the afterlife. The outside floor is littered with fragments of small vessels which are believed to have been used to bring offerings to Djedefre.