The Mysterious Flattened Mountaintop of Monte Alban, and its Ancient...

One of the most unusual and mysterious archaeological sites in modern-day Mexico lies on the summit of Monte Alban. The city is believed to have been built sometime around 500 BC, and it features some of the most oddly shaped structures of the ancient world.

Archaeologists estimate that no more than 15 percent of the ancient site has been uncovered so far. The city is located on top of an artificially flattened mountaintop, raising numerous questions and enigmas. Monte Alban is a mountain where its top seems to have been literally cut off and leveled, to make an extremely flat tabletop mountain. The most interesting part is that built on this massive flat area, an ancient culture built a huge city.

Monte Alban is considered as one of the most iconic and influential cities to have ever existed in Mesoamerica.

It existed for thousands of years until in the 8th century the entire city was mysteriously abandoned.

How did the builders of the city flatten a mountaintop? Furthermore, where did all the remaining material go to?

What sort of technology was used? Its builders managed somehow to flatten an area the size of more than 50 football fields, resulting in a massive plateau, eerily similar to the one found in Giza, Egypt.

While the origins of the massive city built atop the flattened mountaintop are hotly debated, it is believed that at its peak, Monte Alban was the capital of the mighty Zapotec Empire, and was home to more than 35,000 inhabitants, who lived mostly on the terraced slopes of the mountain dedicated to agriculture.

The ancient name of this city founded by the Zapotecs at the end of the Late Preclassic is the subject of discussions. It is known that the Mexicas called the city; Ocelotepec, which can be translated to Monte Jaguar or Monte del Jaguar.

Its Spanish name of Monte Albán was given by the Spaniards, during the Spanish Conquest due to the similarity of the landscape with the mountains in Italy.

It is also believed that Monte Alban may have been under the control of the ancient city of Teotihuacan during the fourth century.

It is well-known that astronomical observation gave the pre-Hispanic society the necessary knowledge to calculate the cycles of agriculture, the changes of season, the proximity of the rains, the times of collection of medicinal plants; as well as to predict future events and to orient the constructions, streets, avenues, and squares towards the cardinal points.

In the Great Plaza at Monte Alban, we find two buildings that experts say, served as astronomical observatories: Building J and P.

Building J, for example, is located on the center of the main plaza of the ancient city and is characterized by a strange arrow-like shape. Furthermore, what makes it even more mysterious is its orientation: it differs from all other structures built at Monte Alban. Another fascinating detail about this ancient city is the sheer number of stelae that have been recovered from the site.

So far, archaeologists have identified several stelae in Monte Alban that contain on their surface exclusively written text, in the form of hieroglyphs, which have no animal or human figures represented. 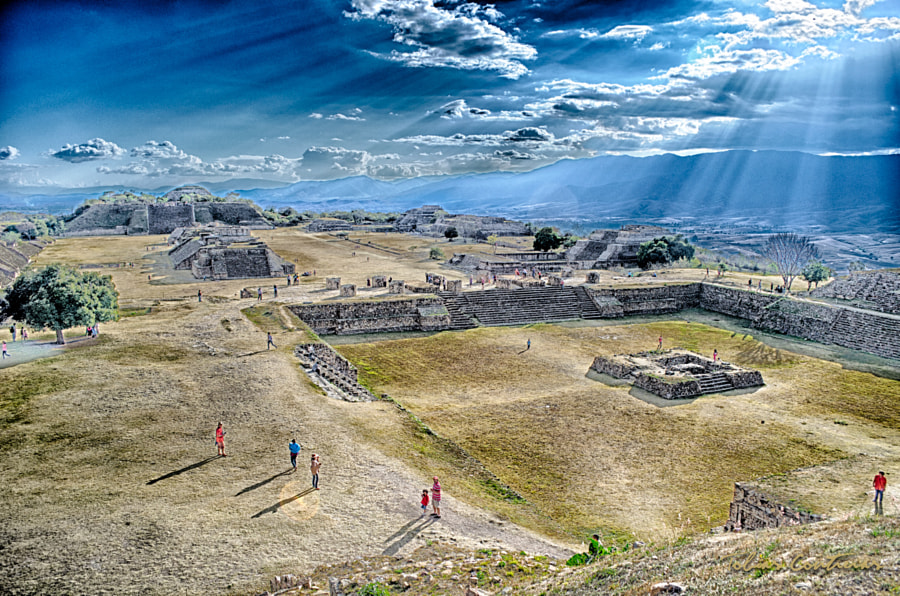 These stelae are located outside the buildings and commemorate important events in the history of the city.

However, the interesting part is that some of these stelae way up to ten tons, which raises the question as to how the ancient managed to transport these massive stone slabs to Monte Alban.

Another fascinating detail is that written on the surface of these massive stelae we find sculpted hieroglyphs which represent numbers.

This fact alone shows that the inhabitants of the region had a great mathematical and astronomical knowledge of which we know very little.

One of the stelae, the largest in Monte Albán, measures approximately six meters in height and is astronomically oriented, perfectly aligned to the north with the Polar Star.