Two historians claim the Ancient Egyptians did not build the...

The historians and authors of a ‘controversial’ forthcoming book firmly believe there is a strong possibility a second ‘Great Sphinx’ remains buried at the Giza plateau and suggest the Great Pyramid at Giza were built thousands of years earlier than previously thought, and not by the ancient Egyptians.

Two historians have questioned whether the ancient Egyptians built the great pyramid of Giza or the pyramids of Giza for that matter. Instead, the two researchers say, these monuments could have been built by a lost civilization that existed on Earth which we are yet to identify.

The authors of an upcoming book that investigates the only remaining wonder of the ancient world cast doubt on the conventional thinking that it was the ancient Egyptians who built the pyramids at Giza in about 2,500 BC.

In fact, this isn’t the first time authors have questioned the idea that the ancient Pyramids built these massive structures.

The two historians Gerry Cannon and Malcolm Hutton affirm that the great Sphinx of Giza, positioned in front of the pyramids must have been carved from a natural rock long before any sand covered the area, which means that at that time, long ago the area had to be fertile. 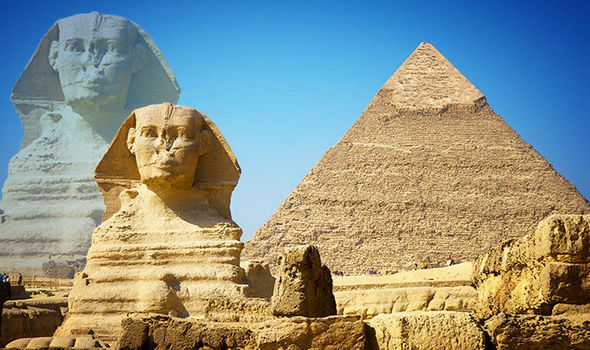 “The Sphinx must have been carved when there was no sand there. You can not carve a rock when it is under the sand. ”

“When it was not under sand was about 12,000 years ago and the Egyptians weren’t there.”

This would mean, according to the research of experts, that the pyramids and the Sphinx were built at least 12,500 years ago and could have been standing there before the beginning of the Ice Age.

The significant time difference would mean that the massive ‘tombs’ were not built by the ancient Egyptians, according to Mr. Cannon.

The historian, though not completely convinced, believes these massive structures may have been built long ago by an advanced ancient civilization that existed somewhere in the region—perhaps Atlantis—which was eventually consumed by the great flood.

“I have done some research and there is a direct line from the pyramids to a submerged continent with a mountain in the sea and on the mountain of the sea, there are two pinnacles that resemble the pyramids. It may be Atlantis, when Atlantis sank they went to another place, probably Egypt and they had the technology to build those pyramids. There is no one else who could have done it, they did not have the technology.”

The three smaller pyramids in Giza were probably built by the Egyptians as they could be built by man.

However, it is impossible for the three largest pyramids—that have 2,250,000 blocks in them and some blocks weigh up to 250 tons—to have been built by the Egyptians.

We could not even move it with all the equipment we have today, so they had to have been made by a civilization that was more advanced than we are today.

In addition to the idea that the pyramids were not constructed by the ancient Egyptians, the authors argue there is a great chance there was s SECOND Sphinx at the Giza plateau.