The mysterious terracotta army of Xian

by Ancient Code Team
1.6kviews
China is land that hides many secrets, researchers would love to be able to reach the Xiaan province and study the gigantic pyramid of the region, one that is believed to hold the secrets of the universe. But there is a lot more to the Xia’an region then you would think, there we can also find the Terracotta Warriors of Xi’an. These mysterious statues were found in 1974 near the tomb of Chinese Emperor Qin Shi Huang (210-209 BC), by peasants of the region who began digging a well in order to draw water for their crops and orchards. 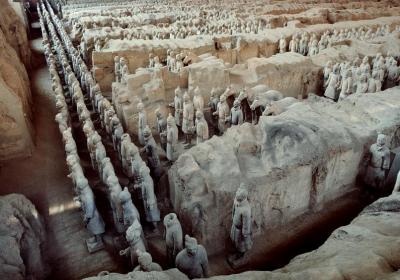 To date, over 6000 terra-cotta warriors have been discovered, but many of them have not been unearthed for mysterious reason. The statues are painted in bright colors, but if they were to get in touch with oxygen they would gradually lose their pigmentation. This is why, Chinese researchers are trying to dig a way around this phenomenon in order to preserve the original pigmentation of the terra-cotta warriors.
The statues measure from 1.80 to 2.00 in height, a striking trait since at the time these figurines were made, the average height of the Chinese was around 1.60 meters. But what is undoubtedly the most striking features of these warriors are their traits and how they were constructed since each of them has a different feature, mustache, hair, ethical features etc… but their armor and clothing are also unique to each warrior. Furthermore, the features of their faces do not inspire fear or dread, but rather the opposite, since all of them are quiet and full of serenity, a very unique feature for a warrior. 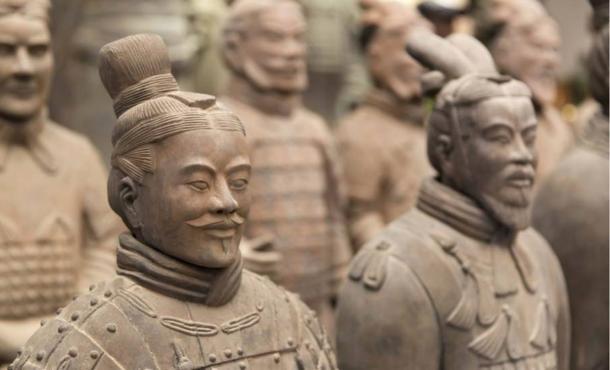 According to the chronicles of the time of Sima Qian, in the year 246. C., the Emperor began work for his tomb. He wanted his tomb to look like the exact copy of the known universe and confine all the wonders of the world. He recruited over 700,000 soldiers from all over the country for the construction of, what was to be, the most splendid eternal abode of all time: The mausoleum of Emperor Qin Shi Huangdi. The ceiling of the burial chamber was made out of bronze and was dotted with gems like a starry sky; on the floor there were rivers of mercury, which were made to flow mechanically, representing the Yellow and Blue River.
It is said that the Emperor built the Xi’an warriors because he believed that his troops would still protect him in the afterlife. But if the Emperor wanted to surround himself with guards, why did he order such relatively friendly features on the faces of his best and most trusted warriors?
Today, many have tried replicating the terra-cotta warriors, but all of the projects ended up in failure since it is impossible, for us today, to match the perfection in which these statues were made in the distant past. What technique were used for the construction of this incredible and unique army? Did they leave behind texts speaking of the methods used to come up with the terracotta warriors? But most importantly, how is it possible that ancient people managed, thousands of years ago, what we today cannot achieve? Archaeologists and researchers have been left perplexed by such magnificent work, one that we cannot replicate today!
And if you ask yourself how much time it would take to make a unique model of 6,000 sculptures, the answer is… a lot!
Terra-cotta army, Terracotta mystery, Xian