What did ancient mankind try to depict with the 7,000-year-old Reptilian statues? Did these enigmatic beings really exist on Earth? Or are they the product of ancient abstract art? The truth behind the reptilian-like figurines is fascinating and has left scholars in awe, ever since their discovery nearly a century ago.

Is this video the ultimate proof that 7,000 years ago, ancient people worshiped reptilian-like deities? Were these statuettes the result of ancient art? Were they merely decorative items? The product of imagination? Alternatively, did the Ubaid culture see lizard-like beings walking among them? Interestingly, evidence of reptilian worship is not only found in Ancient Mesopotamia but numerous ancient cultures around the globe.

The enigmatic 7,000-year-old statuettes discovered by scientists in Mesopotamia show an odd resemblance to modern-day depictions of reptilian humanoids, and some have even suggested the worship of the Reptilian Gods is strictly connected to the Ancient Anunnaki.

The enigmatic statuettes were discovered at the archaeological site of Al-Ubaid. The Ubaid period is a prehistoric period of Mesopotamia, the place where according to many, modern civilization was kick-started with the Sumerians. The Ubaidian culture in Mesopotamia is believed to date back to around 4,000 and 5,500 BC. Strangely, just as with the Sumerians, the origin of the Ubaidian culture remains a profound mystery for modern-day scholars. It is as if these ancient cultures came into existence from one day to the other. 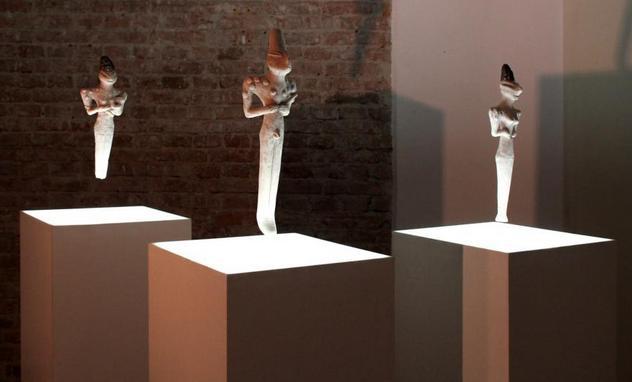 Interestingly, according to scholars, it was during this period that numerous advancements were made by ancient society. During this time, our ancestors started acting and thinking differently. This evolution in thinking brought the Ubaid Culture towards social improvement; settlements became larger towns; irrigation methods were advanced; tools were upgraded, and all of this in combination, led to the construction of the first monumental buildings, kick-starting ‘modern’ society.

However, the leap forward in society was not the most notorious thing researchers discovered. Among the numerous artifacts recovered at the site, mysterious humanoid figurines with strange lizard-like characteristics, both male, and female took researchers by surprise. The lizard-like features seen in the statues are unlike anything previously discovered.

The statuettes depicted humanoid figurines with pointy faces and almond-shaped eyes. Archaeologists have been stunned by these discoveries, and no explanation has been given as to why the Ubaid culture made these strange looking figurines worshiping lizard-like creatures.

Looking back at our history, we will find that reptilian worship isn’t exclusive to ancient Mesopotamia. In fact, Lizard-like creatures have been present in many cultures in ancient cultures, from Quetzalcoatl, Kukulkan, who were the Aztec and Mayan deities represented in the form of a snake, to ancient petroglyphs located worldwide depicting strange looking beings just like the lizard-like figures in the Ubaid Culture. Interestingly, the ancient Sumerians represented one of their most important deities ‘Enki’ as a serpent god. In later periods, the symbol of the snake was adopted in the brotherhood of the snake.

If we travel halfway around the world, from Mesopotamia to the Pacific Coast, we will find extremely interesting details present in the Hopi culture. According to legend, 5,000 years ago a meteor shower caused strange beings, described as the lizard people to seek refuge underground. These creatures constructed an elaborate network of tunnels located beneath Los Angeles, using advanced technologies that could even melt rock.