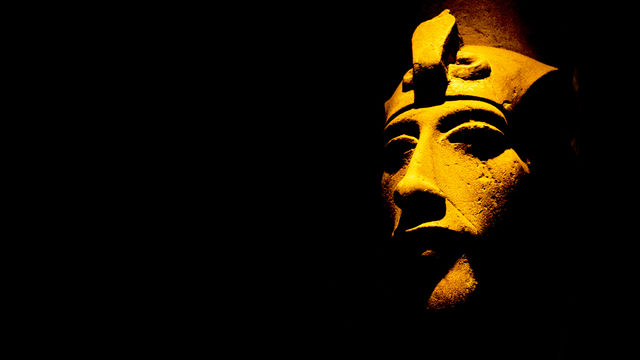 Akhenaten was one of ancient Egypt’s most influential and controversial pharaohs. He is considered one of the world’s most important religious innovators.

He was a Pharaoh of the Eighteenth dynasty and he was the father of Tutankhamun, husband to Queen Nefertiti. Akhenaten claimed to be a direct descendant of Aten and regarded himself to be divine and was himself a God. He is one of the most interesting and mysterious rulers of Ancient Egypt, and here’s why:

Akhenaten was a Pharaoh of the Eighteenth dynasty of Egypt and ruled for 17 years.

Akhenaten was known as the “great heretic” due to his religious innovations.

Akhenaten was the son of Amenhotep III and Queen Tiye.

Early on in his reign, he was known as Amenhotep IV, but he changed his name to Akhenaten to reflect his close link with the new supreme deity of his making.

He was also known as `Akhenaton’ or `Ikhnaton’ and also `Khuenaten’, all of which are translated to mean `successful for’ or `of great use to’ the god Aten.

Akhenaten was married to Queen Nefertiti, one of the most famous of all ancient Egyptian women.

Nefertiti was one of the most influential queens. Paintings show her conducting religious ceremonies with Akhenaten as an equal. However, she wasn’t Akhenaten’s only wife. Kiya was also wife to Akhenaten. Little is known about her, and her actions and roles are poorly documented in the historical record.

Nefertiti’s mummy was never found. Archaeologist June Fletcher claimed she found Nefertiti’s badly-mutilated mummy in a side chamber of the Tomb of Amenhotep II in the Valley of the Kings. Most scholars are not convinced.

Akhenaten was father of both Tutankhamun (by a lesser wife named Lady Kiya) and Tutankhamun’s wife Ankhsenamun (by Nefertiti).

Archaeologists and historians believe that Akhenaten may have taken some of his daughters as sexual consorts, to attempt to father a male heir by them.

Akhenaten ordained new priests, or simply forced priests of Amun into the service of his new monotheism, and proclaimed himself and his queen gods.

Akhenaten elevated Nefertiti to divine status. Scholars suggest that she may have been only 12 when married to Akhenaten.

He is noted for abandoning traditional Egyptian polytheism and introducing worship centered on the Aten.

Akhenaten could have been the first monotheist in all of history.

According to Egyptian Mythology, he descended from the gods who arrived on Earth at the time of Tep Zepi.

“By the ninth year of his reign, Akhenaten had proscribed the old gods of Egypt, and ordered their temples to be closed, a very serious matter, for these institutions played an important part in the economic and social life of the country.”—historian Barbara Watterson

Akhenaten, upon becoming Pharaoh ordered all the iconography of previous gods to be removed.

At some point after his fifth regnal year, Akhenaten initiated a program to erase the name and image of the Theban god, Amon, from all monuments.

According to writings by Akhenaten and poems that were written about him later on, he was visited by beings that descended from the sky, these beings told Akhenaten what he needed to do and how he needed to rule over his people.

Akhenaten claimed to be a direct descendant of Aten and regarded himself to be divine and was himself a God, but not only did he believe himself to be a god, the whole nation worshiped him like one.

Akhenaten ordered the construction of a new capital—called Amarna—and he dedicated it to the sun.

Amarna’s location was chosen so that its sunrise conveyed a symbolic meaning. “East of Amarna the sun rises in a break in the surrounding cliffs. In this landscape the sunrise could be literally ‘read’ as if it were the hieroglyph spelling Akhet-aten or ‘Horizon of the Aten’ — the name of the new city,” wrote Montserrat in his book “Akhenaten: History, Fantasy and Ancient Egypt” (Routledge, 2000).

Akhenaten instituted changes in art and culture and one of the most notable changes was how he would be publicly depicted, not as a strong “untouchable” Pharaoh, but as he really was, “weak”, elongated skull, long neck, sunken eyes, thick thighs, long fingers, backward-turned knee joints, a potbelly and female-like breasts.

Akhenaten likely suffered from an illness called Marfan’s Syndrome. Other possibilities have been suggested including elephantiasis and Froelich’s Syndrome.

After his reign the city of Amarna was abandoned and temples to the sun were destroyed, images of Akhenaten were deliberately defaced.

In 1907, British archaeologist Edward Ayrton made headlines ‘finding’ the actual mummy of Akhenaten in Egypt’s Valley of the Kings. It has long been speculated, as well as much-disputed, that the body found in this tomb was that of the famous Pharaoh Akhenaten. Results of genetic and other scientific tests published in February 2010 have confirmed that the person buried there was both the son of Amenhotep III as well as the father of Tutankhamun.

The last dated appearance of Akhenaten and the Amarna family is in the tomb of Meryra II, and dates from the second month, year 12 of his reign.