Angkor, the ancient metropolis hidden deep inside the Cambodian Jungle is a city unlike any other. Covered in thousands of ancient temples, researchers have found that Angkor was the largest pre-industrial city in the world, with an elaborate infrastructure system connecting an urban sprawl of at least 1,000 square kilometers (390 sq mi) to the well-known temples at its core.

Experts considered Angkor a hydraulic city because it was built with a complex water management network, which was used for systematically stabilizing, storing, and dispersing water throughout the area.

Angor is a lost world. It was an ancient megalopolis on par with sprawling modern cities.

We probably know Angkor for its massive monument, the Angkor Wat: considered by many as the largest religious structure in the world, with long corridors covered in beautiful bas-reliefs, erected by the great king Suryavarman II (reigning from 1112 to 1152.

But it’s more than a massive, beautiful monument.

Angkor is, without doubt, one of those constructions that make your jaw drop.

One of the great wonders built by humans, which is preserved in good condition because it has never been entirely abandoned.

By the year 1000 Angkor must have been one of the largest inhabited cities in the world, composed of its incredible city grid layout of perfectly straight lines, experts estimate the city may have easily housed around 500,000 inhabitants; they were the “Khmers” and their religion, it seems, was based on Hinduism.

Unfortunately, ancient Khmer manuscripts, written on palm leaves and animal skins, did not stand the test of time, but inscriptions in Sanskrit and Khmer language survived, allowing us to understand the power of this ancient city.

The most famous of its structures is without a doubt Angkor Wat, believed to have been built to serve as a funerary temple for  Suryavarnam II, who ordered its construction at the beginning of the 12th century. 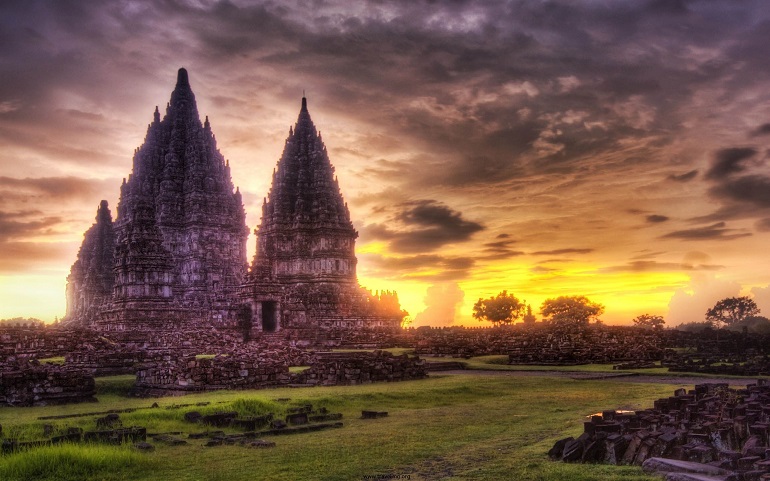 However, the ancient monument is more unique than expected ever believed.

Two curious characteristics make it different from other temples: it is not dedicated to Siva but to Vishnu and the main entrance looks towards the west, towards the “land of the dead”.

Its labyrinth of corridors decorated with elaborate carvings and sculptures covers an area of 2.6 square kilometers; It also has numerous towers built in the shape of lotus buds, the central and larger size exceeds 61 meters.

The city and its incredible, mind-boggling temples made this ancient metropolis a model city of the ancient past.

Angkor had extensive canals and two large deposits located east and west, which could contain millions of liters of water to irrigate crops during times of drought.

Thanks to this they obtained several harvests a year, allowing them to feed a large population.

The Tonle Sap lake (Great Lake), a very shallow lake, covered with flowers, was, in fact, an extraordinary fish reserve.

The surrounding jungle provided them with construction materials, especially teak for the floors. The whole area was rich in sandstone, with abundant deposits of iron, gold, silver, copper, and tin.

If you ever decide to visit this magnificent ancient city you’ll see for yourself what a wonderful achievement of ancient ingenuity the city actually is.

The ruins of Angkor house the huge smiling face of the king-god Jayavarman VII, who differed from his predecessors by converting to Buddhism.

The massive stone-heads transmit serenity and are what many people who have traveled there claim to have felt.

Bayon served as the state temple of the new capital of Jayavarman, Angkor Thom, occupying its center given the centrality of Buddhism in the Khmer empire.

When he was crowned ruler in 1181 he was proclaimed the “Living Buddha”.

The temples of the Angkor area number over one thousand, ranging in scale from nondescript piles of brick rubble scattered through rice fields to the Angkor Wat, said to be the world’s largest single religious monument.

Many of the temples at Angkor have been restored, and together, they comprise the most significant site of Khmer architecture.

Deep in the jungle archaeologists used helicopters fitted with X-Ray lidar cameras in order to study the mysterious ancient ruins of Angkor.

They wanted to understand why the ancient city was built there in the first place, and why it was abandoned.

A number of surveys revealed fascinating details about Angkor.

LiDAR scans revealed that the city is bigger than we’ve ever imagined. Experts didn’t just find scattered temples all over the place, they’ve come across thousands of households and the entire city stretched out in all directions for hundreds of kilometers.

In that first campaign, researchers discovered that the Angkor settlements were much more extensive than expected, a highly urbanized landscape, with a vast network of roads, complex water management systems, and previously unknown temples.

Thanks to lidar scans, archaeologists also discovered the ruins of Mahendraparvata. Archaeologists suspected it was real, but no one was able to find it.  Mahendraparvata was founded in 802 by the first great Khmer king, Jayavarmen II, three centuries before Angkor Wat flourished.

The second survey, done three years ago, allowed researchers to study an area of almost 2000 square kilometers, about five times larger than in the first survey, and thanks to LiDAR technology, they found details about these colossal cities, densely populated, which surely constituted the largest empire on Earth in its time of maximum splendor, in the twelfth century. (Check Angkor Lidar for more)

The new discoveries made at Angkor are important because they are forcing us to rewrite the history books of human civilization. Surveys revealed an ancient city, a powerful civilization, more advanced than archaeologists ever imagined.

And while x-ray and LiDAR scans revealed a massive city devoured by the jungle, the discoveries also raise a number of questions.

Why was this massive city abandoned? Why could have caused more than 500,000 people to abandon a prosperous ancient metropolis?

Whatever happened to the inhabitants of this ancient city remains a mystery, but we no know that the ancient city of Angkor was, without a reason of a doubt, one of the largest and most sophisticated ancient cities to ever exist on Earth.