It seems that researchers have found new traces that prove the existence of King Arthur as experts believe they have stumbled upon the King’s long-lost ‘mythical’ castle.

The mysterious origins of a British archaeological site commonly associated with the legend of King Arthur, have just gotten even more mysterious.

British researchers have discovered in southwest England the ruins of a medieval castle that could have belonged to the central character of British poetry, King Arthur, reports The Independent.

According to researchers, they have discovered the remains of a wall, steps and stone slabs near the village of Tintagel, a place commonly associated with Arthurian legends.

Archaeologists excavated a 1-meter-thick wall in the area believed to have been part of King Arthur’s mythical castle.

The castle is popularly believed to have been the legendary birthplace of King Arthur mostly because of the discovery of a slate engrave with ‘Artognou’ discovered on site in 1998.

Archaeologists estimate that the castle was built around the V or VI century and is believed to have been the residence of the rulers of the ancient kingdom of Dumnonia. The most peculiar thing about the discover is is that the legends of King Arthur stress that the hero lived in the same era.

Researchers excavating the are have come across numerous fragments of pottery and glass as well as amphorae in which wine and olive oil were transported in the distant past.

According to experts, these findings indicate that the inhabitants of the castle belonged to the upper classes of society.

After this discovery, many experts agree that this finding will most certainly ignite the debate about the mythical figure of King Arthur and whether or not this was his castle.

So far, no one has been able to find actual evidence of the existence of King Arthur that turns legend into reality. 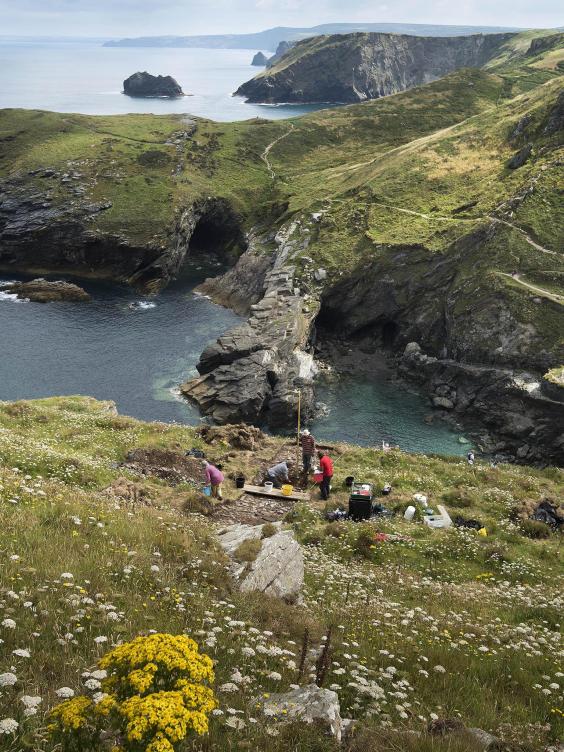 Historians continue to debate whether or not the character of King Arthur was real or if he was a fusion of a number of different mythological figures.

Interestingly, earlier this year a historian claimed to have found the ‘Lost Tomb of Legendary King Arthur.’

According to Legend, King Arthur was transported to the Isle of Avalon after he was injured in a battle with his enemy Mordred before disappearing.

Earlier this year, a historian claimed that he might have finally discovered the resting place of the legendary ruler –in a field in Shropshire.

According to legend, the King led the defence of Britain when Saxon invaders arrived, wielding his legendary sword Excalibur.